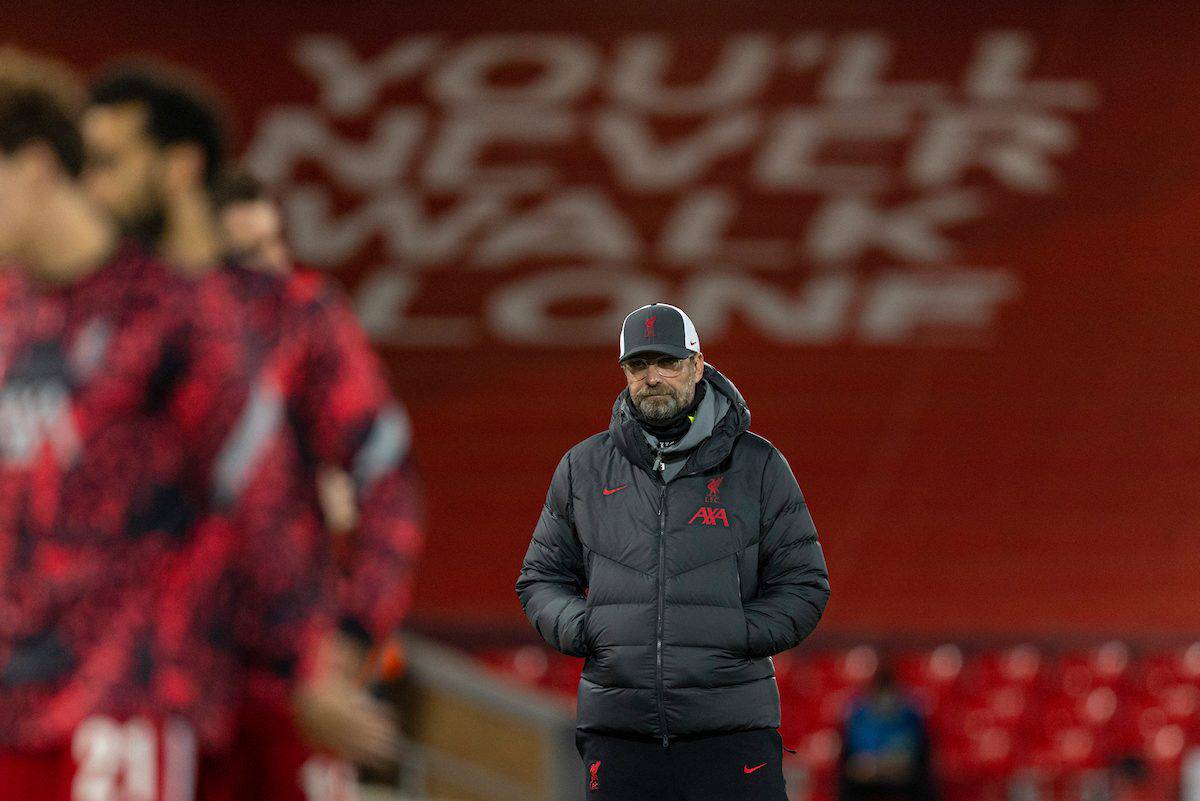 The Reds missed the chance to secure early qualification for the last 16 with a poor loss at Anfield.

Second-half goals from Josip Ilicic and Robin Gosens earned a deserved win for the Serie A outfit, throwing Group D wide open again in the process.

It was a poor night all round at Anfield, and it’s fair to say that the media were not too complimentary of the Reds’ performance…

Writing for Goal, Neil Jones described Liverpool as “second best” on the night and was in no doubt that defeat was merited for a “disjointed” display:

“The result, though, was a disjointed performance which got what it deserved.

The Telegraph‘s Rob Bagchi slammed Klopp’s side for a “shocking performance” and lamented the way the Reds have needlessly complicated the qualifcation path:

“Liverpool remain top and should still be OK, but this felt like a needless loss due to a shocking performance.

“From starting the evening knowing a win guaranteed their qualification, Liverpool may now have to take a more familiar route and sweat it out until their final games.”

The BBC’s Alex Bysouth said Liverpool were deservedly punished for failing to produce the usual levels of intensity:

“Liverpool lacked their usual intensity and even the arrival of Roberto Firmino, Diogo Jota, Andrew Robertson and Fabinho after 61 minutes failed to inspire any urgency.”

ESPN’s Liam Wheeler was critical of the lack of urgency on the pitch, lamenting the fact that Klopp showed more energy than his players:

“You can forgive Jurgen Klopp for ringing in the changes given the unrelenting schedule clubs face this season, but Klopp was probably more animated than his entire starting XI combined, which was reflected both by the scoreline and a bold quadruple change on the hour mark.”

Bagchi rightly pointed out that the timing of Atalanta’s opener was the real killer blow as it gave the oncoming big guns an uphill task to break down a revitalised Serie A side:

“Klopp’s changes had already been coming, but his senior players came into the game against a more confident side, and the English champions’ troubles doubled after 63 minutes when Gosens volleyed past Alisson from close range.

“No longer was this the formality the preamble and team selection had suggested.”

“Perhaps a punishing run of nine games in a little over five weeks to a depleted squad finally took its toll? Perhaps the growing number of absentees was just too much to overcome on this occasion?

“Perhaps it was asking too much for an inexperienced backline containing two teenagers and a Champions League debutant to deal with a side that reached the quarter-finals of this competition just a few months ago?

“This defeat, while lamentable is not terminal.”

The Mail‘s Dominic King thought the starting team was good enough and it was simply complacency that cost Liverpool:

“[Klopp] would take it as an affront to say that his team played complacency but there was a sense of them thinking they had done nearly enough to reach the last 16.

“It was not, however, a team bereft of quality. There was still the twin threat of Mohamed Salah and Sadio Mane up front with experience and quality of James Milner, Gini Wijnaldum and Joel Matip running through the spine of team.”

The heavy rotation was the big factor behind a performance lacking “cohesion and rhythm,” in the view of the Press Association’s Carl Markham:

“The Reds boss made five changes from Sunday’s victory over Leicester, including altering three of his back four, and paid for it with a lack of cohesion and rhythm which allowed last season’s quarter-finalists to become the first team to win at Anfield in 90 minutes since Chelsea in September 2018.”

However, the Liverpool Echo‘s Ian Doyle felt Klopp should have been more mindful of previous group stage struggles and deployed a stronger team to get the job done:

“Perhaps the Reds boss should have known better than to expect his team to secure the win that would have earned progress to the Champions League knockout stages with two games to spare.

“After all, little this season has gone serenely, while his team have a habit of doing things the hard way when negotiating the competition’s group phase.”

The watching journalists were unimpressed with several individual performances…

“Liverpool should have enough to get what they need against Ajax (or Midtjylland), but it will frustrate Klopp that having taken an understandable gamble with his selection, his replacements were unable to deliver.”

Bagchi felt the performances of those given a chance to impress will have been the biggest concern to come out of the night for Klopp:

“[Klopp] may be more concerned that those he trusted to claim their place failed so badly.”

The Mirror‘s Alex Richards felt Neco Williams had a particularly difficult night, assessing that Atalanta targetted the right-back who is struggling to find his feet at the level:

“The Welshman can be erratic at times and perhaps it is harsh that he will be compared to Trent Alexander-Arnold, but Atalanta saw him as a weakness and played on it.”

Wheeler expected more from Joel Matip as the most experienced defender in the new-look, inexperienced back line:

“The German-born defender was Liverpool’s most experienced defender by some distance, but even he looked uncomfortable and couldn’t keep the Serie A side at bay.”

Bagchi found Divock Origi wholly underwhelming and wrote that the Belgian was lucky not to be hooked at half-time:

“Given how much flack he had been taking for minimal contribution, it was a surprise Divock Origi reappeared at half-time. He must have had tinnitus if the dressing room messages echoed those from the sidelines.”

It wasn’t all bad, though, as Wheeler thought Kostas Tsimikas was a bright spot, marking the left-back’s performance 7/10:

“A decent performance from the left-back who showed a real willingness to put in the hard yards in a game where his side lacked their usual rhythm.

“He was always looking to get forward in a battling performance prior to his withdrawal.”

And the Mirror‘s Freddie Kieghley felt Rhys Williams did a solid job, assessing that the centre-back looks comfortable at this level, even in a changed defence: