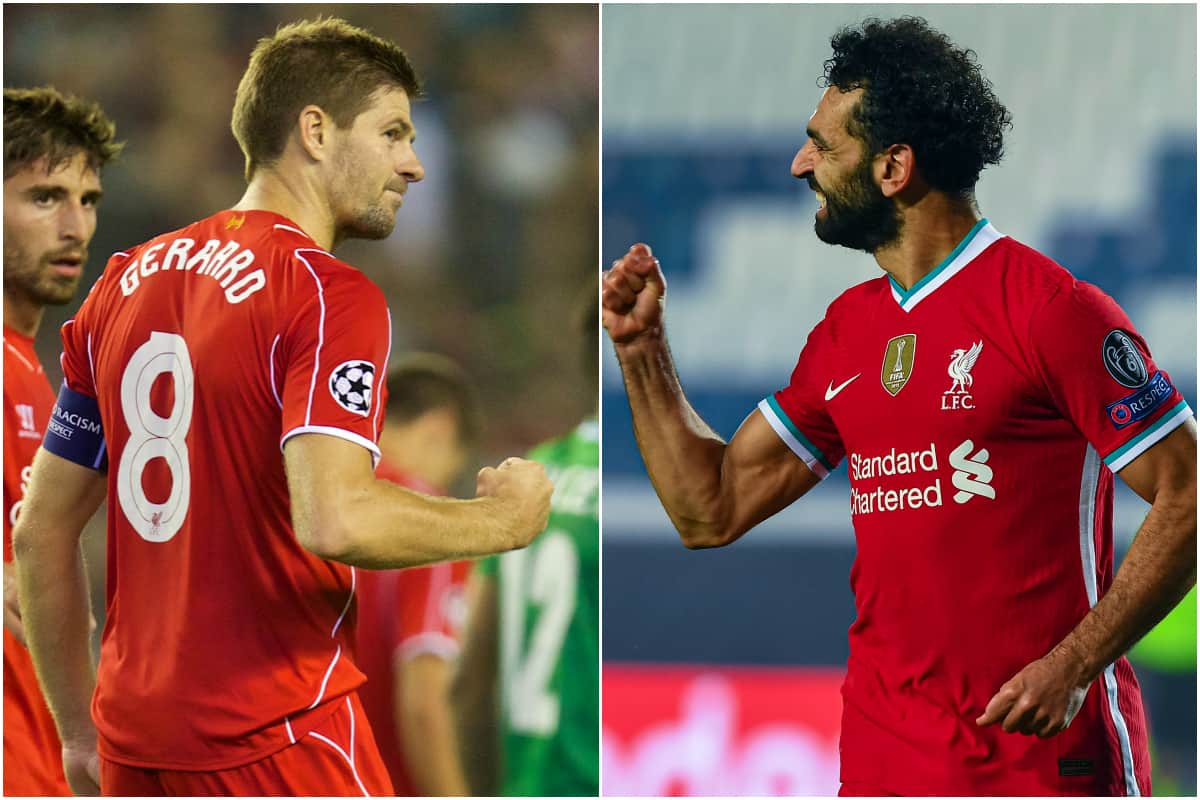 Steven Gerrard both hopes and expects Mohamed Salah to “embarrass” his record as Liverpool’s top goalscorer in the Champions League, after they drew level on Tuesday.

Salah’s goal in the 5-0 thrashing of Atalanta was his 21st in the Champions League proper, which is equal to the tally Gerrard produced during his career with the Reds.

The captain also struck nine times in qualifiers, including five over two legs against Welsh side TNS in 2005, but from the group stage on, he managed 21 in 73 games in the competition.

Excluding his goal against Hoffenheim in 2017, Salah has now hit 21 in 36 games for Liverpool in the Champions League, and it is now inevitable he surpasses Gerrard’s record in the near future.

Reflecting on his record-equalling effort in Bergamo, the Egyptian said he was “very proud” as “Steven Gerrard is a legend for the club.”

Gerrard, meanwhile, was less sentimental, telling the Herald ahead of Rangers’ clash with Benfica – with Alfredo Morelos also now level with Ally McCoist as the Glasgow side’s top scorers in Europe – that “records are there to be broken.”

“I was very proud to see Mo Salah equal my goalscoring record for Liverpool in Europe, it was only a matter of time,” he explained.

“I honestly think he’ll go on and embarrass my record and I hope that he does. That kind of thing is always there for strikers.

“Mo Salah and Alfredo Morelos go about their business always being hungry for goals. My job for Liverpool was slightly different.

“There is nothing better than seeing someone going for a record and then smashing it to pieces.”

Rightly, Gerrard’s focus is now purely on Rangers, and with that Morelos, but his ties with Liverpool are inescapable, and the fact he still stands as the club’s all-time top goalscorer across all competitions in Europe is a testament to that.

One more goal in the Champions League will see Salah break one record, but it would be no surprise to also see the No. 11 sit at the top of the European list from the Reds’ entire history.

There is still a long way to go, with Gerrard having scored 41 including Champions League, Europa League and the old UEFA Cup, along with qualifiers, but Salah is only 19 away.

At his current rate, he could break the all-time record by the time he makes his 73rd outing for the club in Europe – and with his contract not set to expire until 2023, if he stays with Liverpool that is certainly achievable.