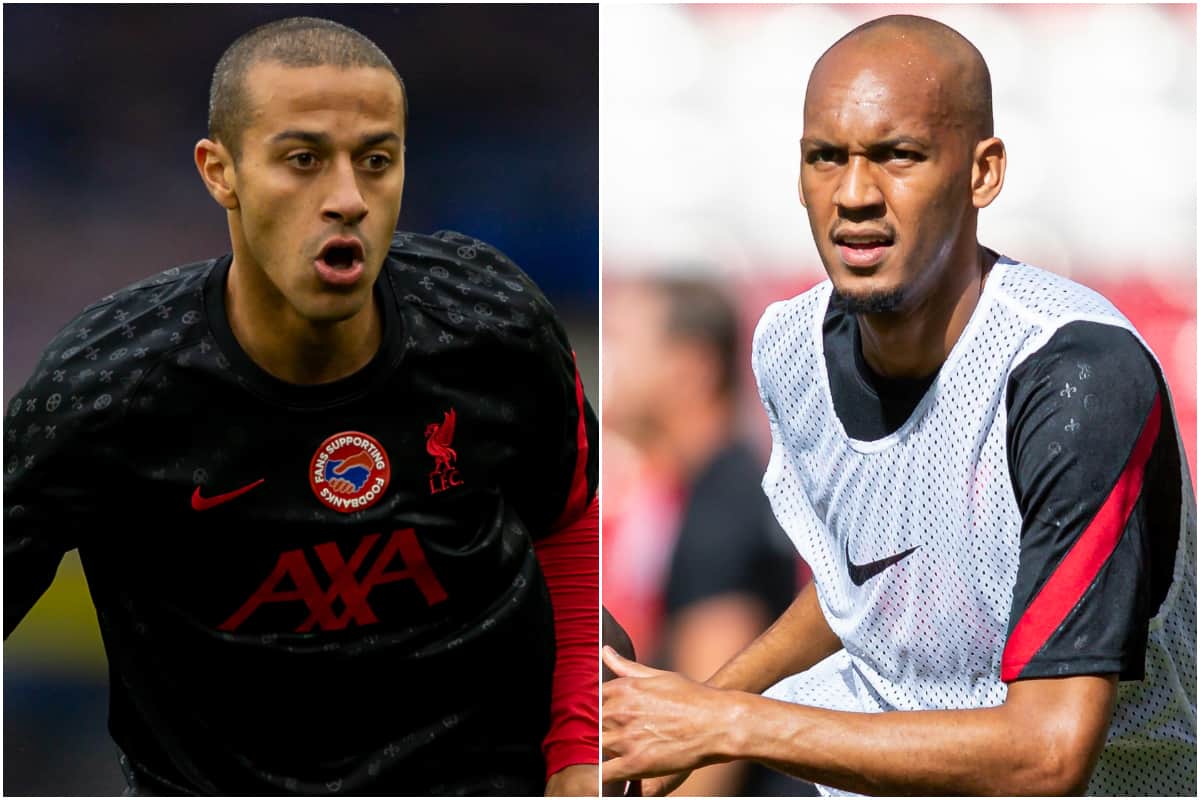 Liverpool could be without both Thiago and Fabinho for the visit of Leicester on Sunday, with the pair yet to return to full training on the first day at Kirkby.

The Reds officially began life at their new training ground on Tuesday, with Jurgen Klopp calling upon a small 13-man squad due to the majority of his players being injured or on international duty.

In fact, James Milner, Joel Matip, Nat Phillips, Divock Origi and Adrian were the only senior players involved, with the manager including a number of youngsters in the session.

While the cameras spotted Alex Oxlade-Chamberlain working alongside rehabilitation fitness coach David Rydings in the gym and Sadio Mane visiting the new facility after returning from Senegal, there was no sign of either Thiago and Fabinho.

It is likely that both were at the training ground, with Fabinho having already spent time at Kirkby during the break, but that they are not yet part of the squad suggests they may not be available against Leicester.

Klopp has previously stressed that he would not rush players back after injury, and with both spending weeks on the sidelines this could rule them out at the weekend.

Fabinho had been pencilled in as a possible starter alongside Matip at centre-back, but that role now seems more likely to go to Phillips, while Thiago‘s return to midfield would have been a welcome boost.

If they are working individually, there is still a chance they could make the squad on Sunday, but their involvement remains a doubt at this stage.

Thiago‘s absence could be magnified by a back issue for Jordan Henderson, with the captain at Kirkby on Tuesday to assess the extent of his injury after reporting tightness midway through England’s 2-0 loss to Belgium.

In the event of both Thiago and Henderson missing out, the likes of Naby Keita and Curtis Jones could benefit in midfield, while there could be a place on the bench for one of Jake Cain or Leighton Clarkson.

James Milner will likely be required at full-back, with Trent Alexander-Arnold out and Andy Robertson currently a doubt.

The manager could, of course, retain his 4-4-2 system from the 1-1 draw with Man City last time out, though with Mohamed Salah not yet cleared to take part on Sunday due to a positive COVID-19 test, his options are slimmer.

Origi’s availability in training throughout the international break could increase his chances of featuring, with Klopp able to assess the Belgian closely at Kirkby.