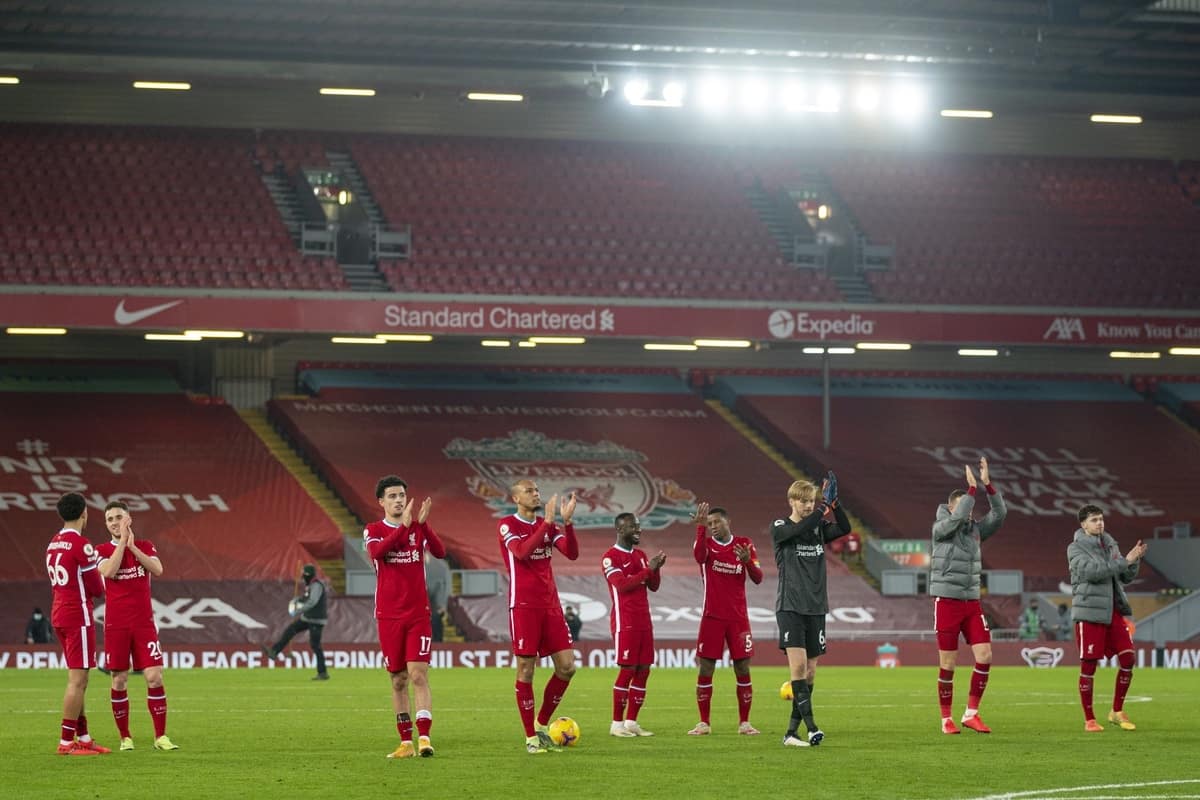 Liverpool were unplayable in their 4-0 win over Wolves in the Premier League on Sunday night, with supporters overjoyed with the result and display.

Jurgen Klopp‘s men took on a well-drilled Wolves team, as 2,000 supporters were allowed back into Anfield for the first time since March.

Liverpool took the lead midway through the first half, with Mohamed Salah capitalising on Conor Coady’s error and finishing with aplomb.

Wolves thought they had a penalty just before half-time, but following a VAR check, Coady was deemed to have gone down under no contact from Sadio Mane.

The Reds were magical in the second half, as efforts from Gini Wijnaldum, Sadio Mane and a Nelson Semedo own goal saw them destroy their opponents in front of a delighted Kop end.

A masterful performance was lauded by the masses…

This has been exceptional against a very handy team. Really controlled for 30 mins so we didn’t give them any chance to break and get a head of steam, then take full control of the game while being clinical in front of goal. What a team this is, no adversity seems to shake us.

Kelleher again with another save. This kid is something else ????

“Comfortable performance from the lads…perfect.”

They make it look so effortless. Like it’s the easiest thing in the world. What a team. I love them

Gini Wijnaldum is a machine. This is his 11th successive start for club and country over the past five weeks. No breather for him. He's absolutely relentless. #LFC

Fabinho is an immense footballer.

World-class in a pass. https://t.co/MNhUGDMjHf

“A special clean sheet for our special Kelleher lad.”

Brilliant performance and we destroyed a very good Wolves side. Good clean sheet as well for Kelleher. Lots of excellent performances from us and a joy to watch! Think the fans made a difference haha! M.O.M for me was Mo Salah ??#LFC

• Massive win in front of the fans.
• Clean sheet.
• Joint top of the league.
• Salah again proving he’s so good.
• Wijnaldum is an absolute machine.
• Matip is my hero.
• Class to see @TrentAA back.
• 10/10 performance all round.

FC Midtjylland (A), next.

Feels odd to praise the goalkeeper after 4-0 victory but I thought Caoimhin Kelleher was just marvellous tonight. A calming influence who makes big saves and looks so comfortable with the ball at his feet. Deservedly #LFC's second choice now.

The return of fans inside Anfield was a joy…

Fans back at Anfield belting You’ll Never Walk Alone and Klopp celebrating at full time in front of the Kop. It was what we all needed.

4-0 v Wolves and Klopp doing his treble fist-pump to Kopites back on the Kop at the end – what a night. UP THE CHAMPION REDS #LFC #LIVWOL #PremierLeague

“Favourite part was the rendition of Si Senor! Absolutely brilliant!”

Klopp unleashing a flurry of fist pumps in front of a triumphant Kop. Been a while…..

Oh my god, the fist bumps are back

Fans (almost) back and business as usual. Firmino started the match like he was in the playground, Kelleher so solid once again. Fabinho, Robertson, Henderson all on song. Trent’s cross… silly. #LFCdigest

Liverpool are still the team to beat this season…

All our players’ performances were superb tonight. Could not fault any of them tonight. Played like true champions.

3pts, clean sheet, fans back in the stadium, champions performance, joint top of the table! Love it!

– Raven on the forums.

A masterclass from the champions.

A performance of champions ?
Hendo incredible, Robbo, Bobby, Fabinho and Matip on top form
Trent's assist ?
And Gini's goal ? MOTM for me
Up the reds!! #LFC #YNWA