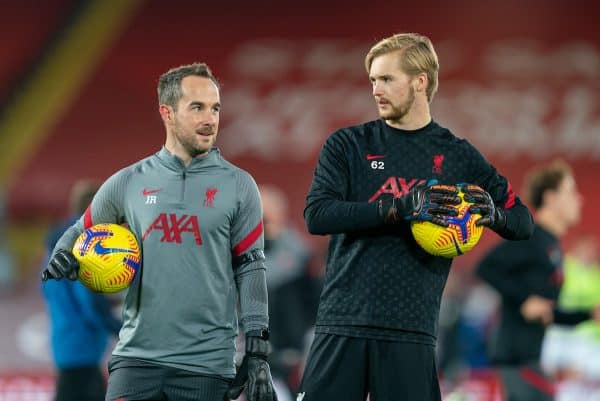 Caoimhin Kelleher is starting to settle into life in the first team after what he called a “mad” week in which he made his debut in two competitions.

With first-choice Alisson Becker still sidelined with a hamstring problem, manager Jurgen Klopp has put his faith in the 22-year-old ahead of established back-up Adrian as he feels the Irishman has better all-round qualities.

After keeping a clean sheet on his first European appearance against Ajax a week ago – capped by a close-range save to deny veteran predator Klaas-Jan Huntelaar a late equaliser – he managed another shut-out against Wolves on his Premier League bow.

It earned him a congratulatory text from Alisson but, more importantly, has sent a message to his new team-mates that he can be trusted to be a reliable understudy.

“Yeah it’s been a decent week. What can I say? Two debuts in one week, it’s been a bit of a mad one,” the Republic of Ireland international said.

“I’ve just been trying to take my opportunities when I’ve had them. I’ve had two games, and felt I did well in them. That’s all I can do.”

Asked whether he was feeling more at ease in his surroundings, he added: “Definitely on the weekend, I felt more comfortable after playing in midweek. The more games you play, the more comfortable you feel.”

Three days before making his Champions League debut at Anfield, Kelleher had been in goal for Liverpool’s under-23s as they shipped seven goals to Manchester City.

In his four previous first-team appearances, in four domestic cup competitions last season, he had twice conceded five to Arsenal and Aston Villa, although one of those was with a youth team as Klopp’s side were in Qatar winning the Club World Cup.

“I wouldn’t say I was disappointed, but obviously I felt I could have done better,” he said of those two matches.

“They were difficult games, we had a lot of younger players against tough opposition which made it more difficult.

“I wasn’t too hard on myself, I didn’t spend too much time thinking of those games.”

Fast-forward 12 months and he is making a stunning save to deny a player who used to be one of Europe’s top strikers.

“It was just kind of an instinctive reaction, to be honest. [Huntelaar] was that close, I just tried to get anything I could on it. Luckily I was able to get it away to safety,” added Kelleher, who is set to start against Midtjylland on Wednesday.

“My phone was buzzing for about three days afterwards, just from friends, family, former coaches, everyone really.

“Alisson texted me as well just to say well done, and that he was proud of me. The messages were all nice and supportive, so it was good to get them.”