Takumi Minamino has been unable to break into the Liverpool forward line on a regular basis as yet, but now Jurgen Klopp feels he can contribute elsewhere.

The Japanese attacker has made 13 appearances for the Reds this season, scoring three goals, but in the two main competitions he has managed just 331 minutes, with only two 90-minute outings.

And, notably, his pair of full-game appearances have not come in the forward line, but in midfield – where the boss feels he might be a more regular option in future.

While injuries have hit Liverpool hard in defence and midfield this term, the attack has been largely untouched aside from a couple of absences for a game or two.

That has made it difficult for Minamino to earn regular starts, with Diogo Jota hitting the ground running with a glut of goals and Taki left to watch on more often than not – though he is at least ahead of Divock Origi in the list of preferred bench options.

Against Brighton, though, there came a full outing for Minamino as one of two No. 8s; it wasn’t a stellar performance on the ball, but the boss clearly saw endeavour and a capacity to learn from his No. 18, which led to another run-out in the same role against Midtjylland.

Judging by his post-match comments where he made reference to Minamino’s improvement and role in good build-up play, that’s something we might see more of in future.

“I liked the football we played in the first half, especially with the so-much-changed team we had tonight,” Klopp said.

“The way we played, the way the boys adapted, not to forget that Takumi Minamino played now only the second time in that position – once in Brighton, which was a different game, and tonight it looked already much better.

“I really like the football we played first half, we had really big… if it’s not a chance then nearly a chance, I’m not sure what is the English word for that. But we had a lot of these moments which we could have used in a better way and that was good.”

While of course Minamino won’t have as much final-third involvement from midfield as he would up front, he has managed to involve himself in both games in that regard. 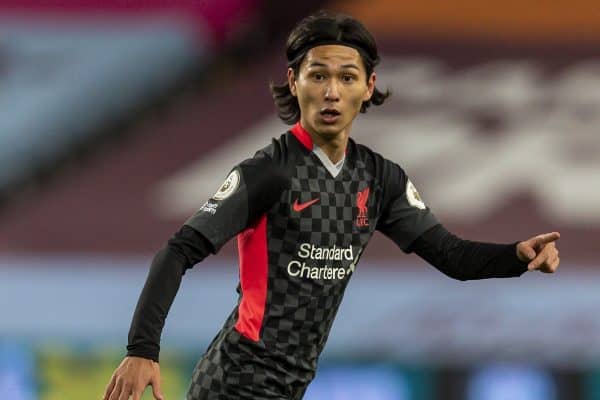 He took one shot against the Seagulls running from deep, and against the Danes on Wednesday he recorded one key pass – and of course would have scored the winner but for a harsh-at-best VAR review.

There’s no lack of effort and running from Minamino, and tactically he will learn quickly from more exposure to the role in training, and while of course it’s unlikely he’ll displace the likes of Gini Wijnaldum or Jordan Henderson, the Reds have habitually made great use of versatile players under Klopp.

It has been a slow integration for Minamino since signing 11 months ago, but perhaps this new route into the team will see him pick up more appearances, more regularly, over the coming month or two with so many games to go around and so many injuries still to contend with.