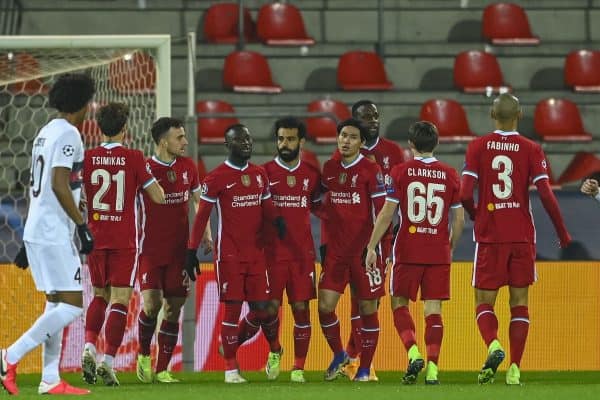 A much-changed Liverpool side were made to settle for a 1-1 draw in their final group game at Midtjylland, on a night which saw Mohamed Salah add more club records to his name.

The final group game provided a rare luxury for Klopp and co. with progression into the knockouts already secured, with the drama of years gone by, thankfully, nowhere in sight.

It ensured there were changes aplenty in Denmark, with balance maintained with the presence of senior pillars in Mohamed Salah and Fabinho – where Trent Alexander-Arnold marked his return to the starting XI with the captain’s armband.

It marked yet another proud moment for the club’s academy, one which was handed another reason to celebrate as Leighton Clarkson made his European debut from the off.

The matchup was in all essence a dead-rubber but that did not stop Klopp from proclaiming the “want to win,” and the Reds looked to heed his notice without delay.

And it was the right boot of Salah with 55 seconds on the clock which edged the Reds into the lead, the club’s quickest in the competition, after he toe-poked home in unspectacular fashion. They all count.

It came after pickpocketing the hosts and charging towards the goal in what was the first showing of what would be a lively performance from the No. 11, with Liverpool going on to control the majority of the first half.

Setting up in a 4-3-3 system with Takumi Minamino in midfield, the Reds looked to make the most of the vacant spaces left open by the hosts – with Clarkson duly impressing with drilled passes between the lines.

While at times disjointed, Liverpool created more than a handful of chances with Diogo Jota forcing Jesper Hansen into two saves, while Naby Keita similarly had an opportunity to establish a healthy buffer before the break.

In fact, it seemed comfortable enough that Kostas Tsimikas even attempted a bicycle kick on goal.

At the other end of the field, Fabinho earned the plaudits for a goal-line clearance to deny Sory Kaba in what is quickly becoming a hallmark of his game.

The crucial defensive clearance would be one of Fabinho‘s last involvements as he made way for 18-year-old Billy Koumetio at the interval, and the young centre-back had little time to settle on debut.

The hosts squeezed the Reds and placed pressure on the back four with an average age of 20.75, finding the crossbar and peppering the goal as they starved Liverpool of possession.

There were then two blows in succession as Tsimikas was withdrawn with a knee injury, requiring Andy Robertson‘s inclusion, before a penalty was converted by the hosts after Caoimhin Kelleher‘s foul on VAR review.

Further senior reinforcements saw Jordan Henderson and Roberto Firmino added to the fold, while the domestic offside confusion crept into the European scene as Midtjylland thought they’d scored a second.

A brilliant save from Kelleher and then a desperate intervention from Henderson at the death kept the scores level and Takumi Minamino looked to have clinched the winner, only for VAR to take an age to overrule offside but then award a handball. Go figure.