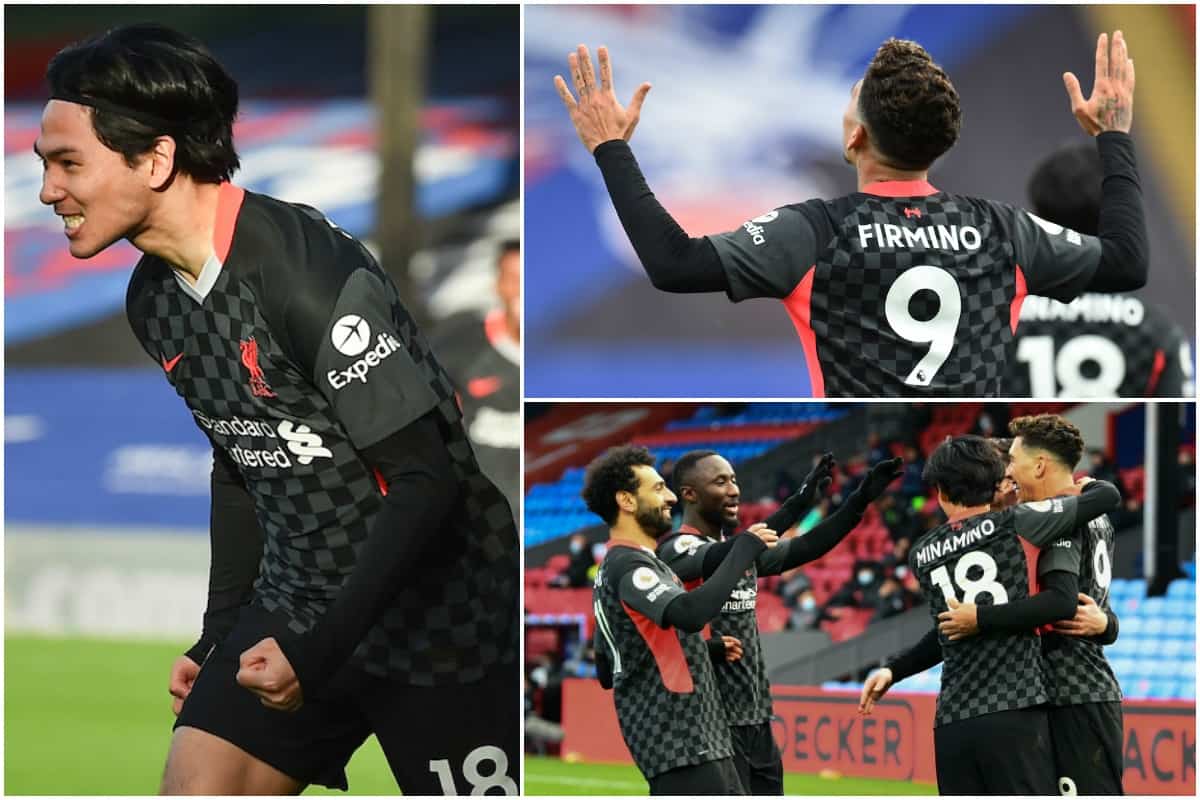 Liverpool’s fondness for records continued as they dismantled Crystal Palace with seven unanswered goals, a result which consolidated their place at the Premier League summit.

The Reds made their way to the capital needing to back up their midweek triumph and they did so in ruthless fashion, picking apart Roy Hodgson’s side with a record-breaking 7-0 win.

Takumi Minamino, Sadio Mane, Roberto Firmino, Jordan Henderson and Mohamed Salah were all on the scoresheet to notch both the club’s biggest ever Premier League win and their biggest away win in the top-flight in 106 years.

With results still to play out elsewhere, Liverpool, for now, hold a six-point lead at the top and will sit at the top of the tree on Christmas Day for the third successive year.

Here, This Is Anfield’s Joanna Durkan (@JoannaDurkan_) and Matt Ladson (@mattladson) discuss the key aspects of Liverpool’s win with John O’Sullivan (@NotoriousJOS), as well as which of the seven goals was the best.

JOHN: No prizes for guessing that I’ll say the win. This game was highlighted as a potential banana skin and it had all the hallmarks of one. Early kick-off, coupled with our poor away form.

But, aside from a slack twenty-five minutes in the first half, we were sublime. Our goal difference was done the power of good.

Also, it’s another clean sheet for the defence that was supposedly going to inhibit us winning the league.

I was so pleased for Minamino. He was excellent throughout.

Usually, he’s been selected in mismatch teams without synergy and it’s hindered his performances. Or he’s played in unfamiliar roles, like on right in the Merseyside derby last season.

But today, he was allowed to play on the left and drop into the half-spaces he likes to operate in. He took his goal with aplomb and — after dovetailing nicely with Naby Keita — his beautiful first touch through on goal should have seen him notch another. 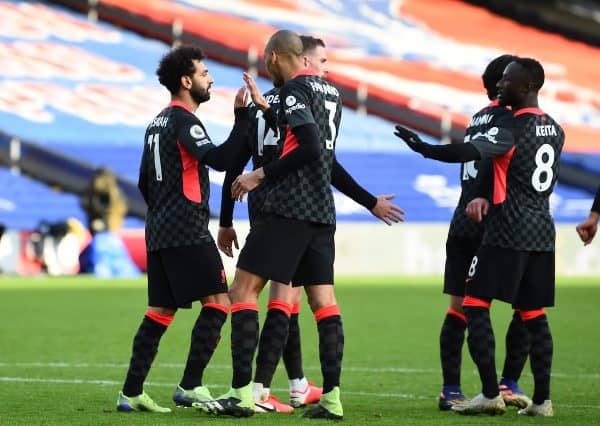 MATT: Where to begin?! The quality of the goals, keeping a cleansheet, inflicting a biggest ever home loss on a Roy Hodgson side… honestly, what a way to put us top at Christmas for the third year in a row!

I actually really liked the benching of Salah. Of course, it helps when it ‘works’ but to have a player like him as an option if we were needing a goal would have also ‘worked’. And for Minamino to get his first league goal so early, that does his confidence a world of good.

All four of the attackers today on target, seven different players assisting. Honestly, you couldn’t write a better good category!

JO: For all that has been thrown at us, it’s incredible to be in the position we are currently.

That we could rest some legs, inject minutes into others and sit back and enjoy the show was delightful – not to mention rid the third-kit memories of that Villa drubbing.

As Matt said, the number of contributors was pleasing and that Taki could open his Premier League account will relieve some of the pressure he no doubt felt.

And you cannot look beyond the return of Ox. His Liverpool career has been anything but smooth sailing and here’s hoping he can build on his short cameo. 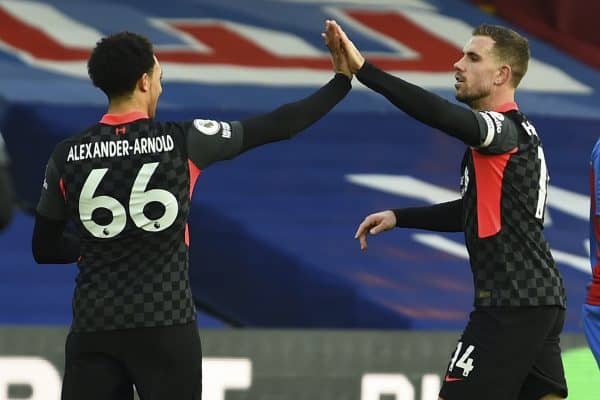 JOHN: It’s becoming so commonplace that it sometimes goes around the radar, but Andrew Robertson claimed another assist in an all-round strong showing. He’s now level with Kevin de Bruyne for having the most assists in the league since the 18/19 season. Remember: he’s a left-back. Superb.

I was delighted to see Firmino bag a brace of goals. His form was patchy for the best part of the year, but he was brilliant today, extending a run of good form.

Took both his goals confidently — the first of which was a trademark no-look finish — and linked up well with those around him. Talk of his regression was greatly exaggerated

MATT: The great is this Liverpool team in general. We’re witnessing the greatest Liverpool side of all-time, setting all-time club records with ridiculous regularity.

Klopp was almost nonchalant when it was put to him post-match about it being our record ever top-flight away win: “this team sets records” was his response. Simple as that.

It’s an absolute travesty though that there are no fans in there to watch this side, which will likely go on to be remembered as the greatest in Premier League history. 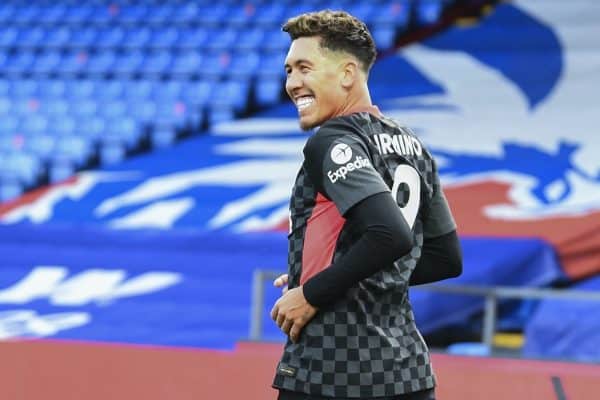 JO: Roberto Firmino. This one is dedicated to him.

It’s been a strange old year for Bobby and I do think he has suffered with the absence of fans, he’s an entertainer and a showman after all.

We slowly started to see his flair return and against Spurs you could see his passion, and here he was the complete package. Klopp said before the game he was not concerned about his goal scoring record and he was right not to be.

But an assist and two goals within an all-round performance showed exactly why he is a key cog in this relentless red machine.

And the best goal?! 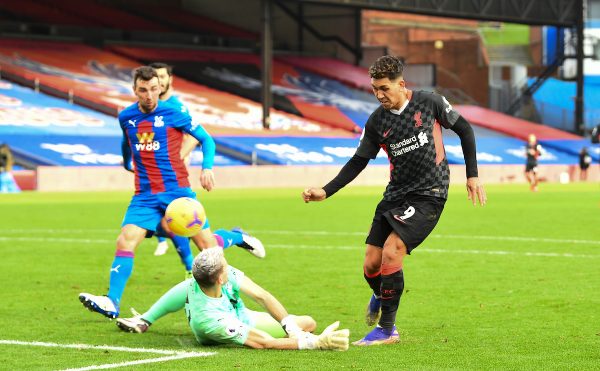 JOHN: Firmino’s first. It encapsulates what’s so brilliant about him.

He goes from defending in his own box to linking with Robertson, running the length of the pitch and then finishing so confidently. Graft and peerless technique, that’s our Bobby.

MATT: The toughest question of the lot! We could do a two-hour debate on this alone.

I’m going with Firmino’s first. It’s a bloody one-two between him and Robertson! Played over 70 yards. Look at the pace of all three forwards on the counter, then Bobby’s first touch and supreme confidence outside of the boot finish. Incredible.

JO: We really were spoiled, weren’t we!

I loved the simplicity and set-up for Henderson’s and the ease in which Salah set up Firmino’s second, but I am in total agreeance with Matt and John and have to say Bobby’s first.

The turn, the pass, the movement, from him and Robbo, and then the composure to take a deft touch before that exquisite finish. B-E-A-UTIFUL.