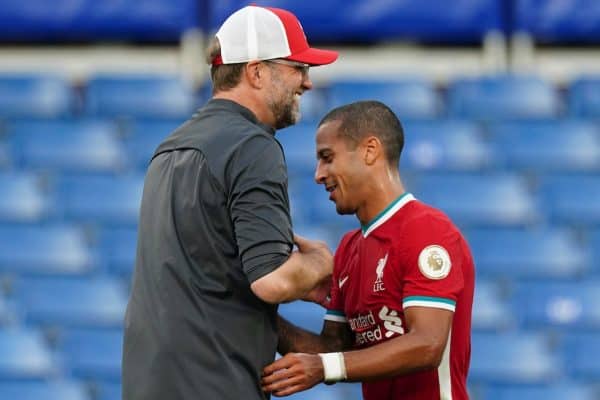 Alisson, Virgil van Dijk, Trent Alexander-Arnold and Thiago were all named in FIFA FIFPro Men’s World11 for 2020, an honour which was not taken lightly by the quartet.

The Reds were the club best represented in the XI with four and while Jurgen Klopp may have been right in that “we had to buy Thiago to win that competition,” it remains a nod to the world-class talent this squad possesses.

And the likes of Andy Robertson, Jordan Henderson, Sadio Mane and Mohamed Salah, who were on the shortlist, further that notion.

The World11 is decided by votes of professional male players around the world and it led to a feeling of gratitude for Trent, Alisson and Thiago – who added to a memorable night for the Reds after Klopp took out the annual top men’s coach for a second successive year.

“It feels good, to be honest with you,” Trent told the club’s official website after being named in the side for the first time.

“It’s something I’ve obviously always dreamed of and it’s an honour to be in and around the names that are in the team. It’s a proud moment for me.

“It’s a prestigious award, it’s an honour to be in the team. It’s something not many players have the privilege of saying they have been able to get included in.

“It’s something I don’t take for granted and I’m obviously thankful for everyone that voted for me.

“Hopefully I’ll be able to keep up the same form that I did in the last year or two years especially. But the main focus for me is not winning these awards, it’s about winning the big trophies, the ones that put the medals around your neck at the end of the season.”

For Alisson, the gong came as a “surprise” after he was beaten to the Best Goalkeeper award by Bayern’s Manuel Neuer but his words were primarily ones for his team after a stellar 2019/20 season.

“I’m really happy. We had an amazing season, winning the Premier League and the Club World Cup as well, playing really well. So I’m really happy and thankful to be there in the top 11,” the No. 1 said.

“For what we are doing on the pitch, for how we are playing, you can close your eyes and put 11 players there from our team. ”


The story is, of course, a little different for Thiago after he earned his place in the side for his incredible campaign with Bayern.

But the Spaniard is already eagerly anticipating having a similar impact at Liverpool after “not the best start” having played just 135 minutes before sustaining a knee injury.

“It’s a beautiful recognition for last year but at the end, we live in the present and we want to play and we want to enjoy football and enjoy it with the guys as well,” Thiago said.

And one of those next steps comes in the form of a return to team training, which Thiago is hopeful can arrive before the end of the year as he continues to make positives fitness steps after two months out of action.