Jurgen Klopp has explained the decision to start Jordan Henderson at centre-back, backing the Liverpool captain to lead Nat Phillips and Rhys Williams through games.

In the absence of Virgil van Dijk, Joe Gomez, Joel Matip and Fabinho, Henderson is now stationed as the Reds’ leading centre-back, which is a far cry from his natural role as an advanced midfielder.

The 30-year-old has honed his positional and defensive game in his time in the No. 6 role, but this is even more of a departure, and he is expected to start at least the next month of games in his new position.

After a shaky outing against Southampton, Henderson was much-improved as centre-back against both Man United and Tottenham, with his ability to play out from the back – and particularly from range – giving the Reds a valuable outlet.

This has largely come alongside the more experienced Fabinho and Matip, but the second half of Thursday’s 3-1 win over Spurs saw Henderson partner Phillips, and the pair meshed well to ensure victory in north London.

Ahead of Sunday’s trip to West Ham, which is likely to see a Henderson-Phillips centre-back partnership from the start, Klopp explained the situation and why he trusts his No. 14 at the back.

“We don’t worry about Nat and Rhys, for example, but it’s about the situation.

“If they play with Joel Matip, Joe Gomez or Virgil van Dijk, that’s absolutely no problem – it’s clear who organises the line and stuff like this.

“But these kinds of things, with young players, it must be the 100 percent right moment.

“You saw around the first goal [against Spurs], this stepping in and chipping the pass, that’s what you want to see as well.

“That he can defend in the position, it’s clear; that he has to adapt and learn the position a little is clear as well.

“But it’s the personality we need, it’s the experience we need and it’s the football we need from the position. That was the decision with Hendo.”

Klopp added that Liverpool’s main issue has been “that we have so many different centre-half pairings,” rather than the specific starters, with 16 so far this season affecting “the whole aesthetic of the game.”

In a way, the availability of Phillips and Williams has been a godsend, as though they have only played a combined 1,124 minutes, either one or both have been in the matchday squad for every Premier League game since Van Dijk’s injury in the Merseyside derby.

Williams has also been an ever-present in the Champions League, playing in all six group games including three starts, and Phillips is likely to be registered for the competition for the second half of the campaign.

Klopp has emphasised his trust in the duo, despite their inexperience, and insisted he would not overcoach them, embracing their individuality.

“We speak constantly, but probably not the talks you think we have. It’s not that I explain the game to them every day,” he continued.

“They are talented, really talented, and they will have a proper, proper career. That’s all fine.

“But trust means letting them do it in a specific way and not judge everything, ‘oh no, if you do that then you would have done better with that’. 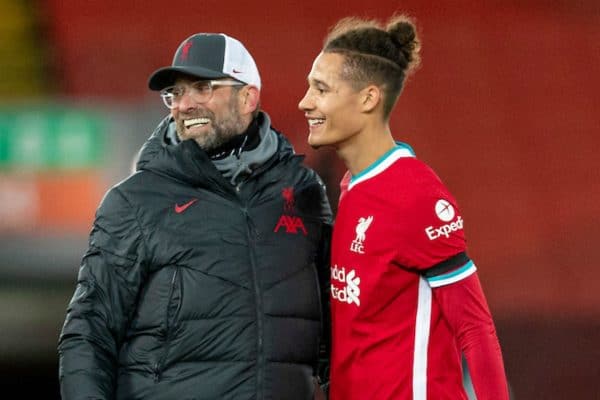 “Yes, we talk, but it’s not that every day we give them a book about playing centre-half in the Premier League. We have a lot of faith and trust in the boys.

“For example last night, really tricky one. Nat coming on, early challenge, yellow card, then staying calm and playing a really good game which helped us a lot.

“That was really, really good. So we are happy about that.”