RB Leipzig are claimed to be “resigned” to Dayot Upamecano leaving in the summer due to a £37.3 million release clause, with Liverpool among the many clubs interested.

With a January arrival unlikely, the Reds’ recruitment staff are busy weighing up their targets for the summer ahead, which could prove to be a big one for the club.

Gini Wijnaldum, Adrian and Nat Phillips are currently due to leave on the expiry of their contracts, while defence is the main priority following the blow of injuries to Virgil van Dijk, Joe Gomez and Joel Matip this season.

The hope will be that all three are fit and firing heading into 2021/22, with Fabinho either able to return to his natural role in midfield or, given his form at the back this season, established as a new long-term partner for Van Dijk.

But while this season is the most demanding in living memory, Jurgen Klopp will be well aware that he cannot head into another campaign with only three senior centre-backs and a midfielder as stand-in.

The outstanding duo, however, are Leipzig’s Upamecano and Ibrahima Konate, with the former of particular interest as one of the most highly regarded young centre-backs in Europe.

More striking, of course, is the release clause in Upamecano’s contract with Leipzig that will allow him to leave for a relatively low fee of €42 million (£37.3m) in the summer.

According to the Guardian‘s Fabrizio Romano, Leipzig are “resigned” to the Frenchman leaving at the end of the season – with the release clause leaving them powerless if the player wishes to depart – though a January exit has been ruled out.

Romano names Liverpool, Chelsea and Man United among “several Premier League clubs” considering a move for Upamecano, along with Bayern Munich, who have a penchant for hoovering up the Bundesliga’s best talent, albeit rarely from Leipzig themselves.

This puts Upamecano in a favourable position, certainly if all of the sides touted with an interest do activate his release clause, as the 22-year-old would be given his pick of many of Europe’s best clubs. 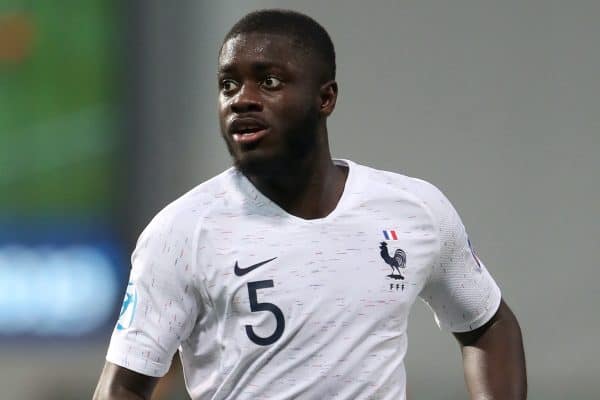 Working with Klopp at Anfield would likely be an attractive proposition, but Liverpool may not be in a position to offer the wages that their rivals would be willing to, nor perhaps the guarantee of an immediate first-choice role.

The Independent‘s Melissa Reddy has explained that “when Liverpool do buy a centre-back, it will be their intention that the player ultimately replaces Matip,” which highlights their long-term view.

But it could be that Upamecano arrives as an eventual successor to Van Dijk, as though the Dutchman will remain the bedrock of Klopp’s defence for years to come, it is notable that Leipzig’s No. 5 is also left-sided and seven years his junior.