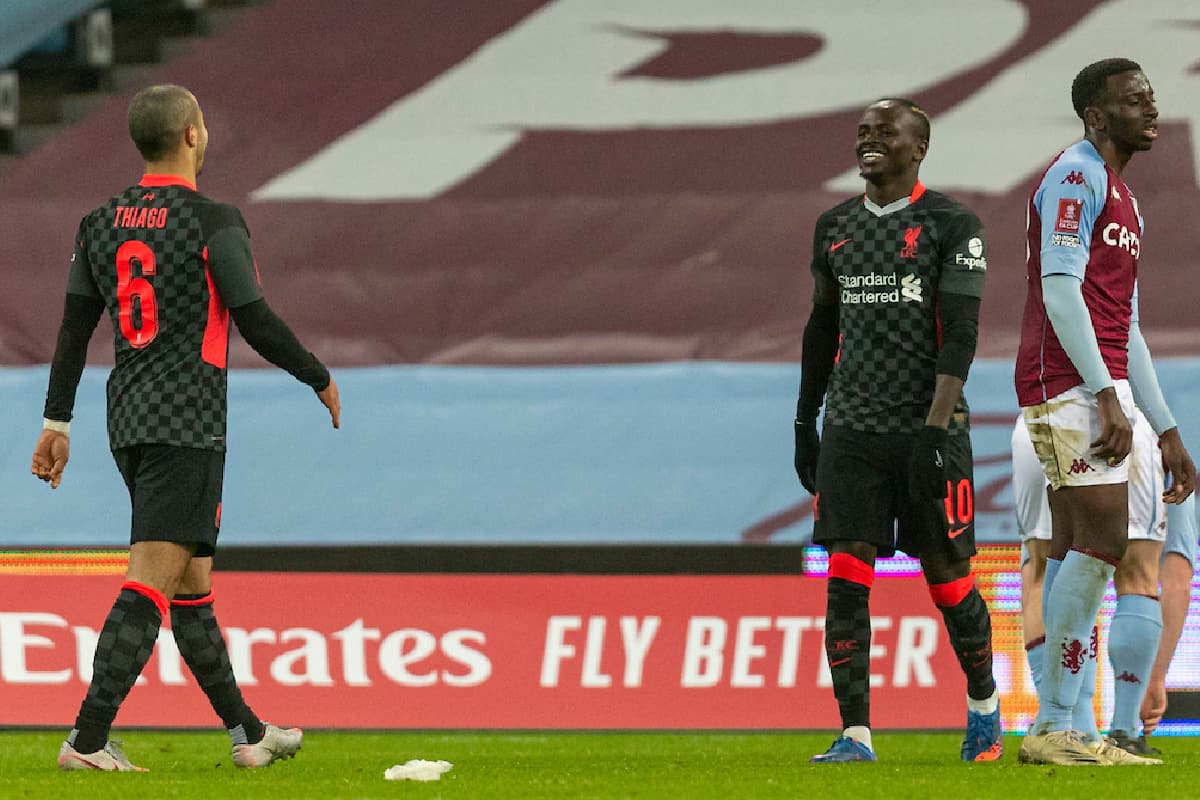 It was a strange old evening for Liverpool in the FA Cup in a game which was ultimately played out before the first whistle ever sounded at Villa Park.

A game we could neither have won nor lost in many respects, Villa Park on Friday offered a live-action example of what an internal training match behind-closed-doors looks like. Which was all very apt really, given that it was a game that took place behind-closed-doors.

It was hard not to feel made up for the kids of Aston Villa in being handed the chance to represent their club and launch their senior careers on mass, in the FA Cup third round against a very strong Liverpool line-up.

Handed a kit list and departure time, packed lunches hastily prepared, walking boots and pac-a-mac located, plus £5 put into a plain envelope with their name written on the front in black biro for them to spend in the souvenir shop, Mungo Bridge moved by Mr Delaney from the back row of the minibus to sit next to him at the front because he got a bit over-excited by it all, Dominic Revan nursing a brown paper bag and complaining of being carsick, Louie Barry in awe of and loving absolutely everything about the trip, wondering if it’s OK to eat his Breakaway while asking Mamadou Dialla Sylla if he wants to swap bags of crisps. An apple randomly roles down the aisle, perilously close to Mr Delaney and the driver.

Liverpool players, and supporters alike, struggled to get their heads around this game. With no certainty that it would take place at all, until earlier in the afternoon, Jurgen Klopp went with focus and the line-up he devised days ago in preparation to take on Villa’s senior players, remained the line-up to take to the pitch against their kids.

Asked prior to kick off if he felt any sympathies for Villa’s predicament, Klopp seemed nonplussed by the question. For him, football is all about opportunity. How can you feel sympathy for a gang of teenagers being gifted the biggest night of their lives?

For me, that overplayed gif of Larry David sprang to mind. The one where he mulls the pros and cons of the situation he finds himself in.

On one hand, they were just kids we were up against while on the other, our last two visits to a ground that has often been very good to us resulted in 12 goals being conceded, with our own collection of kids taking to the pitch on the first of those games.

Then there is always a third element at play, with the image of those paper-hatted Villa fans heading to the 2015 FA Cup final throwing a ‘hilarious cheer up Steven Gerrard party’ on their train, neither enjoying the day for what it was or with any inkling of the impending doom that lay ahead across a 12 month-span that would see them travel from being dismantled in the FA Cup final to sinking into a three-year stay in the Championship.

Back in 2021, Sadio Mane scored early but the expected avalanche of goals never came, while it was also initially disconcerting to see him limp away from the impact.

Chasing shadows for a spell, Villa eventually gained in confidence. Akos Onodi made a string of fine saves despite wearing a headband that made it look as if he had a bookie’s pen lodged behind his right ear.

In a game of commentator bingo, it took ten minutes until Kidderminster Harriers got a mention with relation to Rhys Williams. It’s mentioned so often that I’m beginning to forget that Jan Molby used to manage them.

From here, until the hour mark, it was a game of youthful exuberance versus the frustrations of star players who should know better. Jordan Henderson seemed too sheepish to impose himself, Curtis Jones took his foot off the gas after the first goal, while both Mo Salah and Mane were regularly guilty of either selfishness or a lack of awareness, heads down with the ball at their feet all too often.

The Rhys of the Williamses had culpability in Villa’s well-taken equaliser. He got on the wrong side of Barry and was outstripped for pace.

Gravity applied itself in the second half. The introduction of Thiago Alcantara was punishing on young legs and minds.

Three beautifully taken goals arrived just beyond the hour via a fine Gini Wijnaldum finish for 2-1, swiftly followed by a brilliantly directed header by Mane, for 3-1, and a marvellously intelligent goal by Salah for 4-1.

It all got a bit pre-season from there, as a revolving door policy was introduced for substitutions while we remained largely encamped in the Villa half.

A surreal and muted night navigated where our goals were barely celebrated, it’s hard to take any real indicators in how much intent Klopp has for this season’s FA Cup.

The fourth round sits between Premier League encounters at home to Burnley and away at Tottenham, so it is likely to be dealt with as a bit of an irritant by the Liverpool manager and much will depend on the opponents we are faced with.

We will only reach the business end of the FA Cup if Klopp can play the percentages to get there.

As for Villa, we are due to face them in the Premier League again in April, and as a team with nothing other than league games to occupy themselves, between now and the end of the season, they could provide an uncomfortable hurdle as the run-in takes shape.

Now we’re faced with an almost unsettling lack of football before what will be the visit of a Manchester United side that might be Premier League leaders by the time they arrive at Anfield next Sunday.