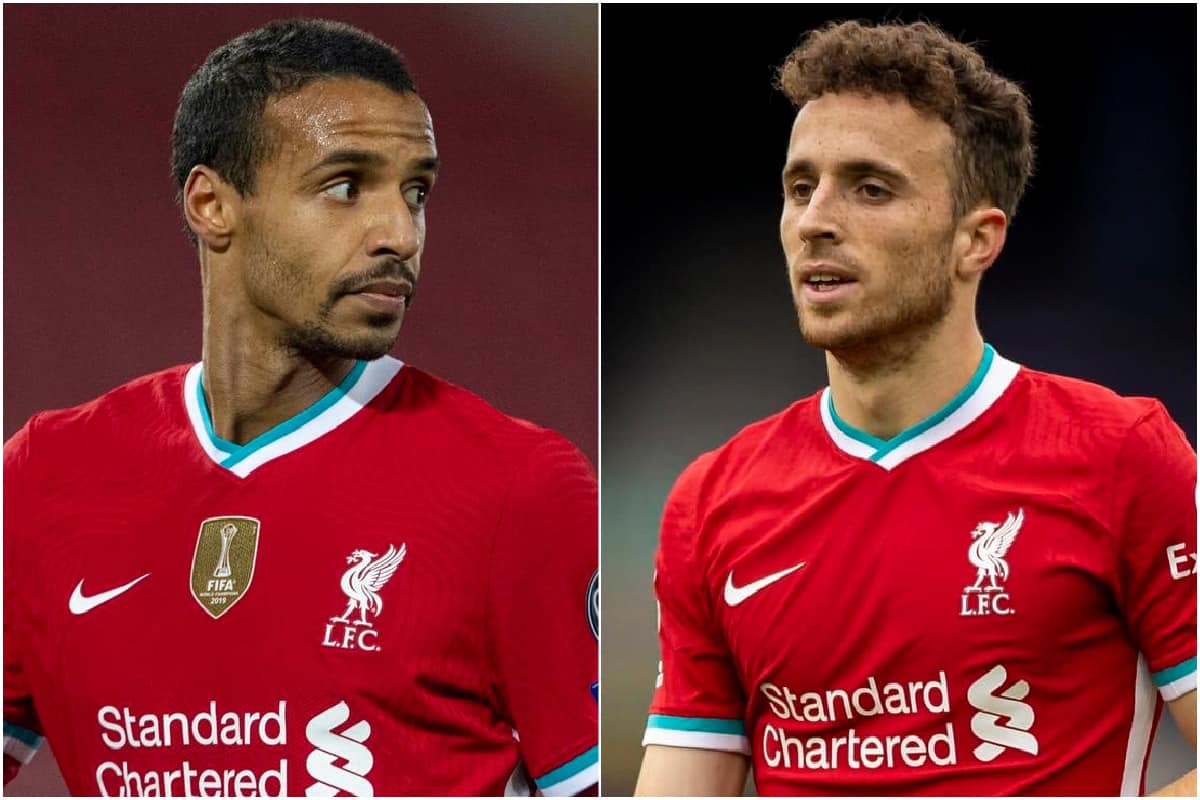 There is “no real time frame” for the return of Diogo Jota as he continues his recovery from a knee injury, while the hope remains that Joel Matip will be back in contention against Man United.

The Reds have seen some of their injury woes alleviate in recent weeks after the likes of Thiago, Xherdan Shaqiri and Alex Oxlade-Chamberlain made successful returns.

But there are still a host of key figures who remain absent from the Liverpool squad, namely Virgil van Dijk, Joe Gomez, Diogo Jota, Naby Keita and Joel Matip.

The former centre-back pairing are unlikely to be seen again this season, but the latter trio continue to leave many on edge as to their respective returns.

With just one goal scored in the last three outings and only seven shots on target mustered in that time, the influence of Jota has been sorely missed following on from his bright start which returned nine goals in 17 games.

He has been absent since the trip to Midtjylland at the start of December and it was claimed he could be in the squad by the end of January, but Jurgen Klopp says he is still “a few weeks away from team training.”

That would inevitably shift his likely return to the team to February as he will need to build a fitness base once more, where Man City‘s visit on February 6 will no doubt be highlighted.

“It will still take time, he is still wearing the brace so that means he’s still a few weeks away from team training,” Klopp told reporters ahead of his side’s trip to Villa Park.

“So there’s nothing to say really, it takes time. There was no surgery required but it was a proper injury and it’s not a little knock or something.

“It will take time and so there’s no real time frame.”

Matip, on the other hand, has a chance to feature in the all-important league clash against Man United on January 17, with the club to do everything in their power to make it happen.

The No. 32 was withdrawn at the hour mark against West Brom with an adductor injury.

“It will get tight, but yes we will try [for Man United game],” Klopp added. “We try working on that, obviously. Until the United game we still have, nine days, so we try.

“He’s in a good way but if it will be United or a few days later, I don’t know.

It is a welcome boost to know there is light at the end of the tunnel, with Naby Keita also to be back “soon”, but not at Villa, after missing the last three games with a muscle injury.

Klopp did note that “fresh legs” could be injected for the FA Cup clash at Aston Villa, where in doing so a number of senior faces would be handed a rare extended break up to 13 days.