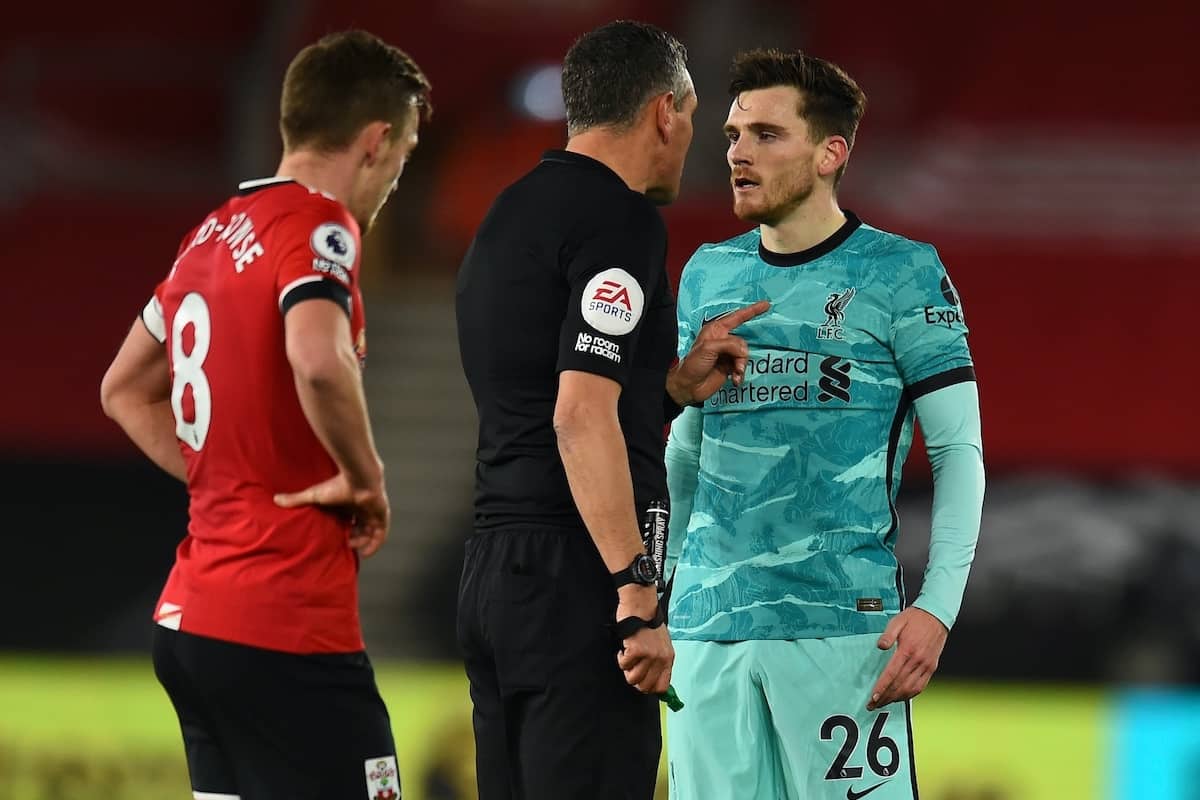 Liverpool were a shadow of themselves on the south coast, delivering a disappointing performance which resulted in a 1-0 defeat at Southamtpon.

The Reds made the trip to the south coast for their first game of 2021 in search of three valuable points and they came nowhere close, seeing seven points dropped in the last three games.

It did not get off to the best of starts, as sloppy defending made way for Danny Ings to open the scoring with just minutes on the clock – lending itself to one of the worst 45 minutes of the season.

Finding the target proved difficult and VAR inconsistency frustrating in the second half as the Saints stubbornly defended their lead.

One-shot on target defined what was a disappointing and forgettable evening as they have now left the door ajar for the rest of the pack to seize.

It was an evening to forget…

Really poor. Sort of match where conversely you prefer to lose by a proper losing scoreline. 85mins of that was torture, crossing repeatedly to nobody, thoughtless build-ups, so many didn’t show up. Isn’t a time for panic but this recent stretch has been embarrassing. #LFCdigest

Dry January is really being tested and we’re only four days in.

“We deserve nothing. We have been a massive pile of dung today.”

“Well done Southampton. Played well. Liverpool are totally out of sorts at the moment.”

Only saving grace is the season isn’t over yet.

Blame the ref all you want but that was so poor from Liverpool.

Klopp's got some work to do here, in a rut at the worst possible time.#LFC #SOULIV

First day back in work after Christmas, 6 week lockdown announced and Liverpool lose. 2021 is making 2020 look like the best year of the Millennium #SOULIV #LFC #lockdown

Well done Southampton, a well deserved win against the Champions.

I really don’t want to take anything away from the Saints but that was absolutely dire from Liverpool, about time they remembered that no matter what you won last season, it counts for nothing in this one. Poor.

That’s not terminal, but it’s the third bad showing on the bounce. And it’s attack, not the defence, that’s the big issue.

Top of the Premier League still but #LFC have some serious issues to contend with. Their core XI looks hugely fatigued and those returning from injury are miles away from sharpness. Tonight’s lineup surely underlines the need for an extra body at centre-back.

“Feel like I’ve watched 4 hours worth of football without us getting close to scoring.”

#LFC could play until the end of lockdown here and still not score.

Some terrible refereeing there and no way Liverpool deserved to lose, but very, very poor in the final third again.

Lots of possession but didn’t test Forster at all.

Lots of talk about the CBs but the attacking play is the issue at the moment. Need Jota back ASAP.

Seven shots on target against West Brom, Newcastle and Southampton, one goal

Attacking play really concerning since the Palace win. Devoid of ideas, unable to play through the middle and resorting to aimless crosses every time.

There was a consensus the centre-back situation needs addressing…

Henderson experiment not working. Gap at back needs to be plugged by at least bringing in someone on loan. Not saying it is only problem today but a big one.

All these people discussing how to fix the issues Liverpool are having now – it isn't complicated, it isn't difficult, we don't need anything fancy or novel.

We need a real CB, and we need our captain back in the midfield.

The midfield which was on the pitch when Liverpool last won the Champions League is now three quarters of their defence.

And there's still some people saying we don't need to buy a centreback lol.

Can point to obvious issues in final third but biggest issue that needs addressing is at CB. Forcing the two best MF in this system to drop in and cover affects the chemistry of the entire team

Seeing as Liverpool's back four now contains three midfielders, maybe it's time for their much-lauded recruitment department to spring into action.

Have they changed the laws of football or something

Salah grabbed around the neck, Mane fouled inside the area, Milner cleaned out, Mane pushed to the ground but it’s Shaqiri who gets a yellow for playing the ball. This is just ludicrous.

Milner taken out with a two footed lunge, nothing given and commentators don’t even mention it. Incredible.

“How does that not even get reviewed, he clipped him on the ankle. Pogba gets that call every day of the week and twice on Saturdays.”

Semmy on the forums.

It’s not that Liverpool don’t get that. It’s that others would

What’s the script with VAR tonight? Is he watching Channel 4?

This is one of the worst refereeing performances I've ever seen. Absolute joke.