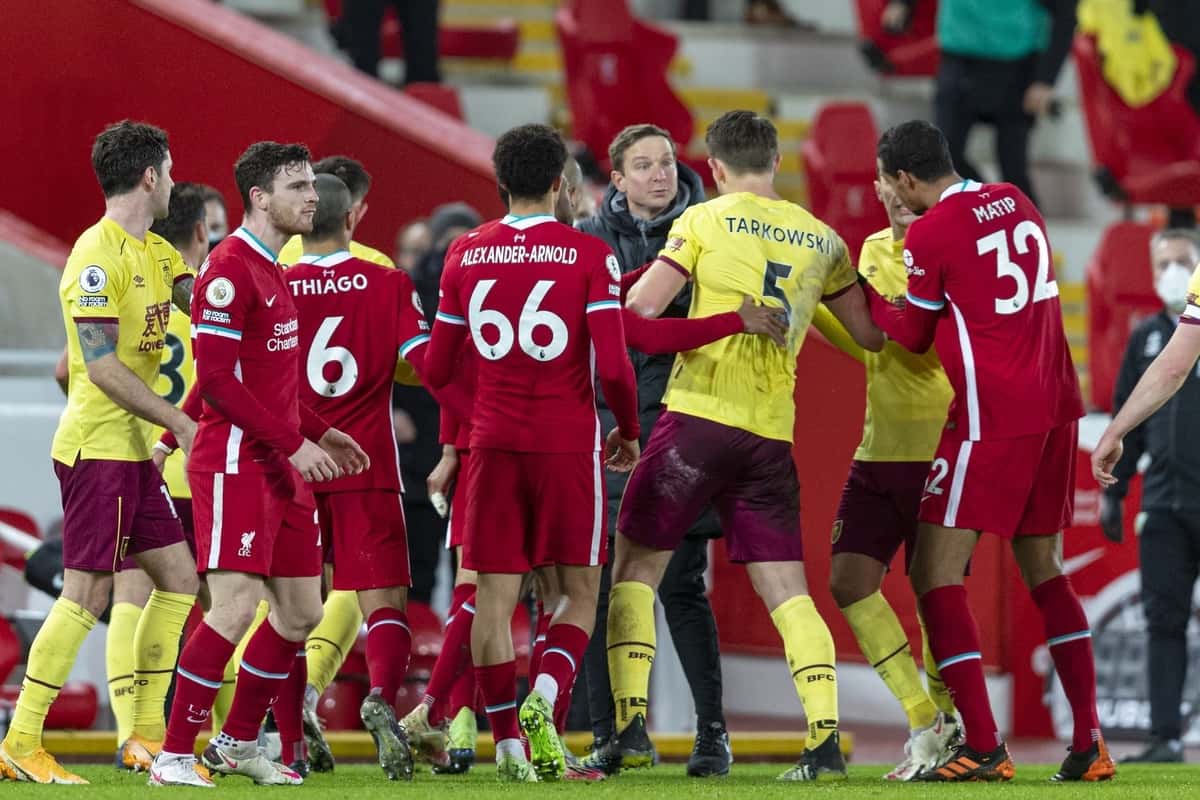 Liverpool’s long unbeaten home run came to a devastating end on Thursday night, as the Reds lost 1-0 at home to Burnley.

After a poor run of results, Jurgen Klopp‘s champions needed a win against a well-drilled Clarets outfit.

As was the case against Man United on Sunday, Liverpool failed to create anything of note in the first half, barring one glorious chance that saw Divock Origi hit the crossbar.

Despite playing slightly better after the break, the hosts’ end product continued to be woeful and they were punished late on.

Alisson fouled Ashley Barnes in the area and the Burnley striker stepped up and fired home the penalty, sealing a momentous victory in the process.

An appalling performance was lambasted after the final whistle…

Terrible. Losing the home record was always likely in an empty Anfield. But all told we are seriously lethargic

#LFC were always going to lose a league game at Anfield eventually but that feels big for different reasons. Namely that they just no longer look like a title-challenging team. Injuries a key reason, no doubt about it, but I didn’t expect to be saying that so early in the season.

Losing the Anfield record in the most pitiful circumstances. Liverpool so, so poor. No intensity, no belief, no movement. Don’t even look like scoring.

It’s weird. I shouldn’t care this much, especially after we just won the title. The problem is we haven’t even had time to celebrate, no supporters in grounds, no parade.

This season is just an awful grind, nothing to really savour. And right now constant dread of the next game.

“Team is broken. Big clearout needed at the end of this season.”

Liverpool lost. In more ways than one.

“Disgraceful I hope Klopp comes out and says it.”

– RER on the forums.

Such a brainless, idiotic performance. Cross after cross against a team desperate to do nothing but deal with crosses and long balls. Going to log off Twitter tonight because I'm frustrated and will doubtless say something stupid. We're in real trouble at the moment.

For some, Liverpool’s title hopes are over…

Oh well, being champions was fun while it lasted.

Shambolic run of form – a team completely ground down by injuries, bad luck and individuals slipping well below their best.

Dreadful. Forget a title race, we’ll be lucky to get top four if this isn’t rectified very, very quickly.

“The title is slipping away and 2 more weeks of this and top 4 will be the focus.”

Liverpool's 68-game unbeaten run stretching back to April 2017 is over. So too, could be their hopes of retaining the title. A disastrous night for the Reds.

“Could be 7th come next league game”

PL title race over for Liverpool. Have to concentrate on finishing in top 4 and doing well cup competitions now.

Oxlade-Chamberlain fluffed his chance to impress…

Not convinced Ox is a football player, anymore.

Ox is on his way out the club I reckon.

Ox in the front 3 has never worked. Ever. Not even in pre-season. Absolutely no idea why Klopp tried it again.

There were also real concerns about Trent’s form…

Completely fallen apart. The players look devoid of ideas but they've clearly been overplayed – even the ones with alternatives in the squad week after week.

Trent Alexander-Arnold case in point; he's done nothing during this run that Neco Williams couldn't.

Genuinely think that Trent performance is one of the worst I’ve ever seen in a Liverpool shirt. Would have rather had Johnny Vegas on the pitch

I'm not saying that Trent Alexander-Arnold's having a bad game, but the last time I saw so many crosses with so little gained was the final scene of Oh What A Lovely War…#LIVBUR #NicheReference #LFC