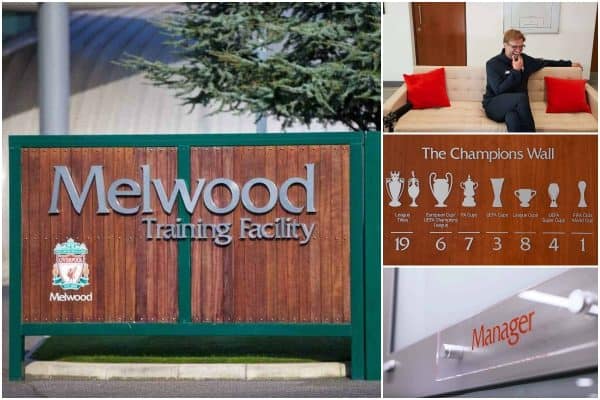 With Liverpool having left Melwood back in November, the former training ground is in its final stages of farewell and one of those includes an auction of special memorabilia.

After more than 70 years, the Reds waved goodbye to a place which had etched itself into the fabric of the club and had seen over 40 major honours won and various managers and players walk through its doors.

They traded Melwood for the AXA Training Centre in Kirkby to see the first-team link up with the academy for the first time, bringing together the present and the future under one roof.

But in doing so, countless items were left behind and now they are to be auctioned off to fans online, where some items are to raise funds for the club’s foundation.

And ahead of the event on March 2, a catalogue of what is up for grabs has been released and there’s a multitude of items that are certain to raise eyebrows for both good and bad reasons.

From door signs and storing units to the famous lettering walls and items used by Jurgen Klopp, the collection is vast and has everything you could think of – and even some you wouldn’t. And here are eight of our favourite listed items.

A pricey item for the fact that it was once used by Klopp and it is one which will no doubt attract plenty of bidders with his initials ‘JK’ etched into the hardwood door.

It is for his second locker at Melwood as part of the first-team coaching staff’s changing room, and as such is slightly smaller than his first – which is not listed for auction.

Wonder what his combination for the lock was?

It would be unlikely that this press conference desk would be used for its initial design, but it could make one hell of an office desk.

A bespoke piece with history to boot and plenty of famous and familiar faces to have used it throughout its lifetime, where can we sign up?

From Klopp’s old office itself and it is the tactic board you see in the image above, with all 23 magnetic counters to boot.

It’ll certainly have been used by the boss himself and it would certainly be an item anyone could find a home for, should you wish to part with up to £600.

And strangely enough, the couch Klopp is sitting on in the image is also for sale as the third priciest item – and don’t worry, it comes with the two red cushions.

Everything you see here could be yours, the crest and lettering, you just need a decent size wall and you’re sorted – in addition to a few thousand pounds.

This is another one of those pieces that will certainly get people talking!

This is an interesting one as you can pick up a number of locker room doors from the first-team dressing room, with the name and number of current members of the squad.

From Jordan Henderson, Trent Alexander-Arnold and Joe Gomez to Andy Robertson and Alisson.

They’re just the doors so the person to buy any of them would need to find something to attach them to, and they’re expected to be sold in the region of £1,000-£1,500.

You may need to make some room for this famous boot rack, but what an honour it would be to do so.

It shows signs of wear and tear and that’s what makes it so valuable, having been home to a long line of Liverpool players and managers, in addition to being the backdrop for the photoshoots of countless new signings – including the infamous Mario Balotelli.

Let’s just hope they’ve sprayed some air freshener before the new owner gets their hands on it.

This would be a dream to own, even if it were to be out of date in the near future.

It represents the history of the club we love and every major honour which has been secured from 1901 to 2020 – not to mention that it has long adorned Melwood’s walls.

This is certainly one of the priciest items, with an estimate of £7,500-£15,000, and whoever picks it up will have secured a very special item indeed.

That’s right, someone can own the original main entrance sign – talk about an impact purchase.

Imagine having this in your backyard or even greeting guests as they arrive, if walls could talk it would surely have a lot of stories to tell.

There is slight blemish as the dot on the first i in ‘Training” is missing, but we’re nitpicking here – so, anyone have a spare £10,000?

Special Mentions for the other end of the spectrum…

* If you want more information as to how to participate in the auction you can do so here.