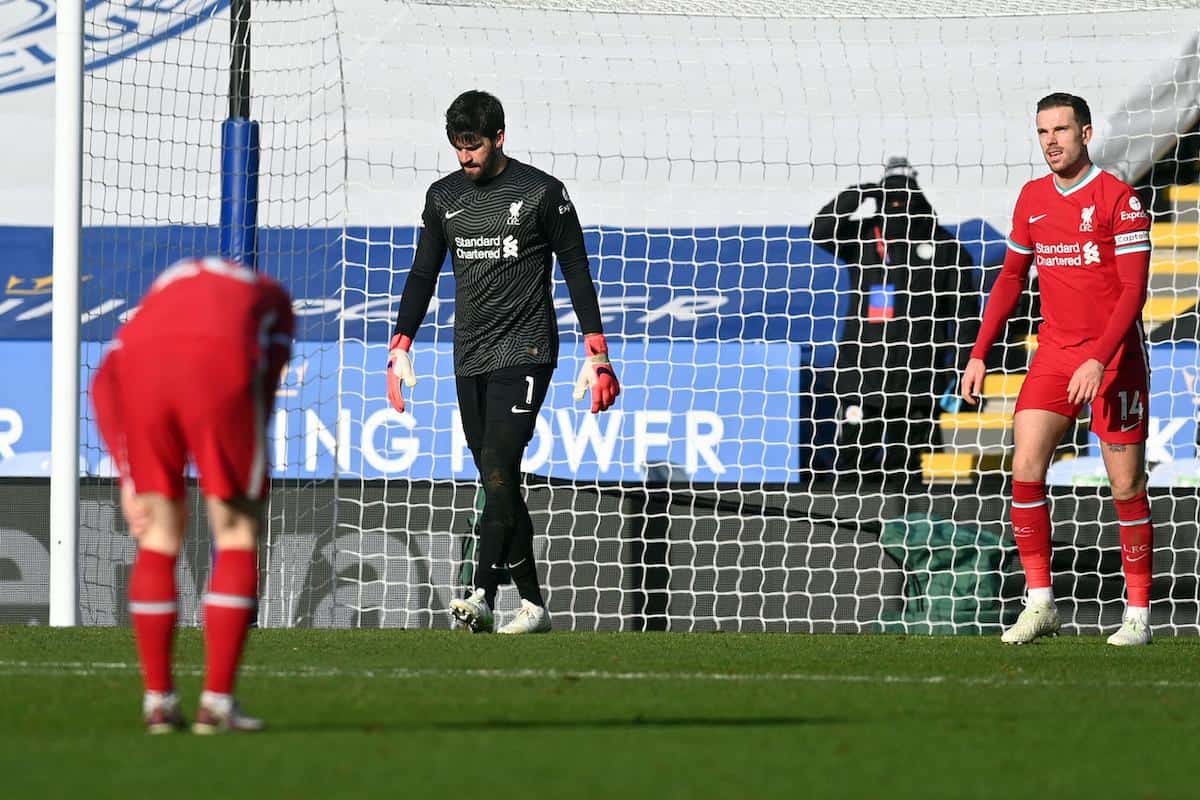 Liverpool controlled the game, took the lead and looked the part against Leicester…then completely collapsed, losing 3-1 and their grip on the top four. 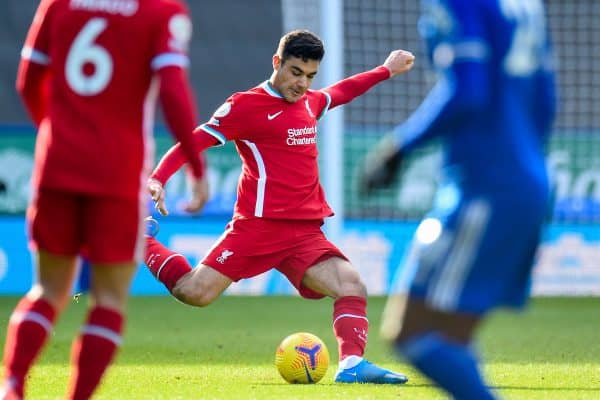 Jurgen Klopp finally got to name a first-team capable centre-back at centre-back, which was a novelty.

Ozan Kabak made his Reds debut, for the first hour looking halfway between comfortable and natural and lacking confidence and understanding.

Positionally it was as fine as you’d expect: he knows where to be for certain situations, but not specifically where to be in this Liverpool team – several times he dropped several yards deeper than the rest, possibly by design to get a yard headstart on Jamie Vardy.

Passing out was kept simple, usually to Henderson and usually accurate – safety-first was the watchword, as you might expect from a young debutant.

And in the air, he wasn’t directly tested too many times but did misjudge one which ran in behind him to gift a chance for the runner, which Alisson stopped.

Then the final 15 minutes happened, with a crazy crash between Kabak and Alisson leading to one and the defender unable to stop a through pass for the third. Not the ideal introduction, and a big reminder to us all that there is no quick fix. 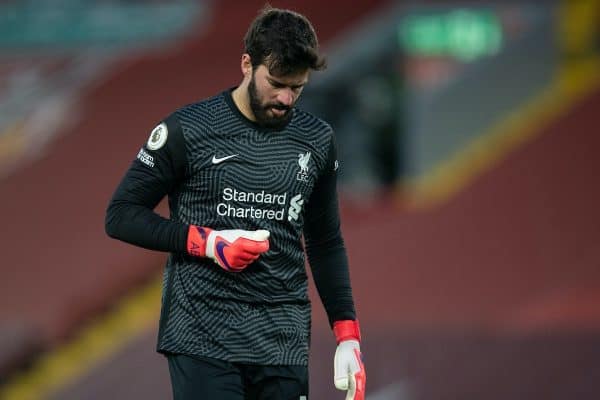 After the second half footwork bungles against City, it was important that – whatever the outcome of the match – Liverpool got to see Alisson Becker back in form and looking confident.

That might have been ruined minutes in, had James Maddison’s strike from his own half carried more power, but in an otherwise quiet opening 45, Alisson came out on top three times.

Once, a routine save from a header. Then, standing up big to thwart the one-on-one which ran in behind Kabak. And thirdly, a moment of fortune as Vardy smashed the crossbar rather than into the top corner as he ran through.

Then, yes, he and Kabak had a big collision. There should have been screams from Ali if he was coming for it – perhaps there was, it wasn’t heard over TV or by Jurgen – but possibly he simply should have stayed at home.

Either way, it was a telling moment, but he did still make another unbelievably good stop after that point, a double save which most keepers wouldn’t have stopped one of.

Ali can’t be held accountable for the defeat overall, but maybe his showing mirrored Liverpool’s: mostly good, occasionally exception, yet still with a costly error and defeat. 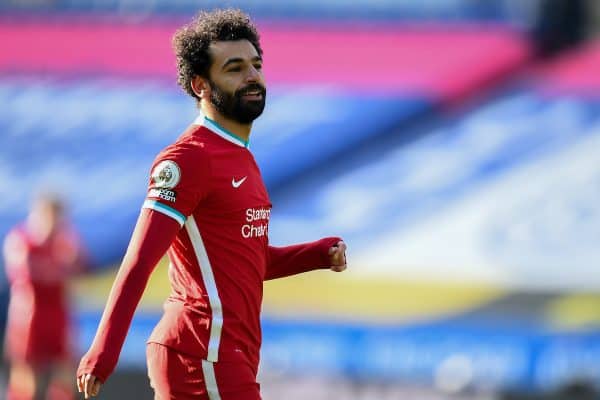 Ten out of ten isn’t an unreasonable assessment for the Reds’ passing, circulation and first touch – right up until the first cut of grass outside the penalty box.

But from that groundsperson-measured line on the pitch through to the goal-line, it was roughly a two in the first hour of play.

This has been the case in most matches over the last couple of months. Whether it’s a piece of combination play, a lack of runners from deep, not enough confidence from individuals or the clinical, speedy passing.

Salah’s goal was a perfect execution of what we used to see: full-back rampaging, forward with a great touch and use of space, unerring finish.

More of that, please, and less of the aimless final 15 minutes which saw zero created after midfield substitutions – just like against Man City. 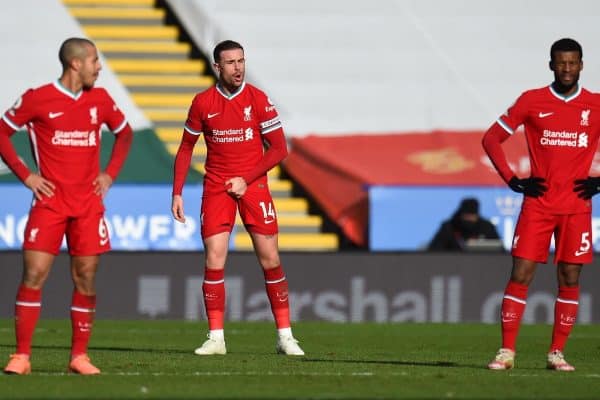 Nothing against the specific players involved here, but rather the overall mindset of the team perhaps.

We’ve gone from knowing we’ll score and beat anybody, to not knowing how to net past anybody and not really looking like getting back into a game once we go behind.

Control of a game and even taking the lead is all well and good, but there’s not really a sense of inevitability about Liverpool’s play right now, so conceding isn’t a surprise – not a good way to be.

It’s almost as though many of the players have the sense of ‘here we go again’ when something bad goes against the team and there’s too much of a mindset which is not precisely giving up, but certainly doesn’t know the route back to winning ways. 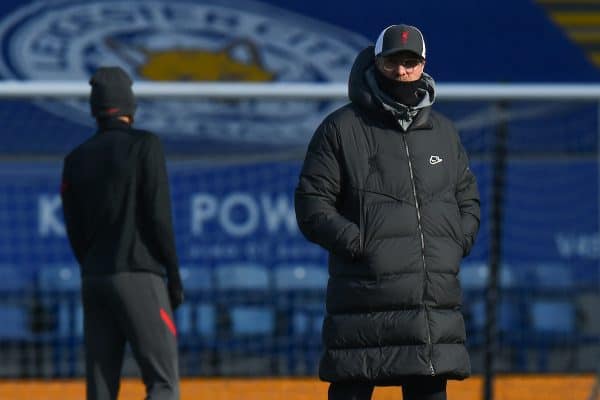 So the title talk is done with – and if we don’t sort ourselves out quickly, we’ll be repeating the trick for Champions League football chatter.

There’s a long way to go yet and make no mistake, the other top-four challengers will have bad runs and drop silly points too. It’s just that season.

But Liverpool, right now, aren’t beating the top sides or the bad ones.

That must change extremely quickly, and next up is a less-than-ideal trip overseas to face RB Leipzig, one of the teams with the most attacking movement and tactical versatility in all of Europe.

What will be needed is a clinical edge, defensive organisation and good communication, and right now the Reds don’t have much of any of them.

Then it’s the small matter of the Merseyside derby next weekend, another game which could shape our top-four prospects against an in-form challenger. The next eight days are likely to be defining ones.