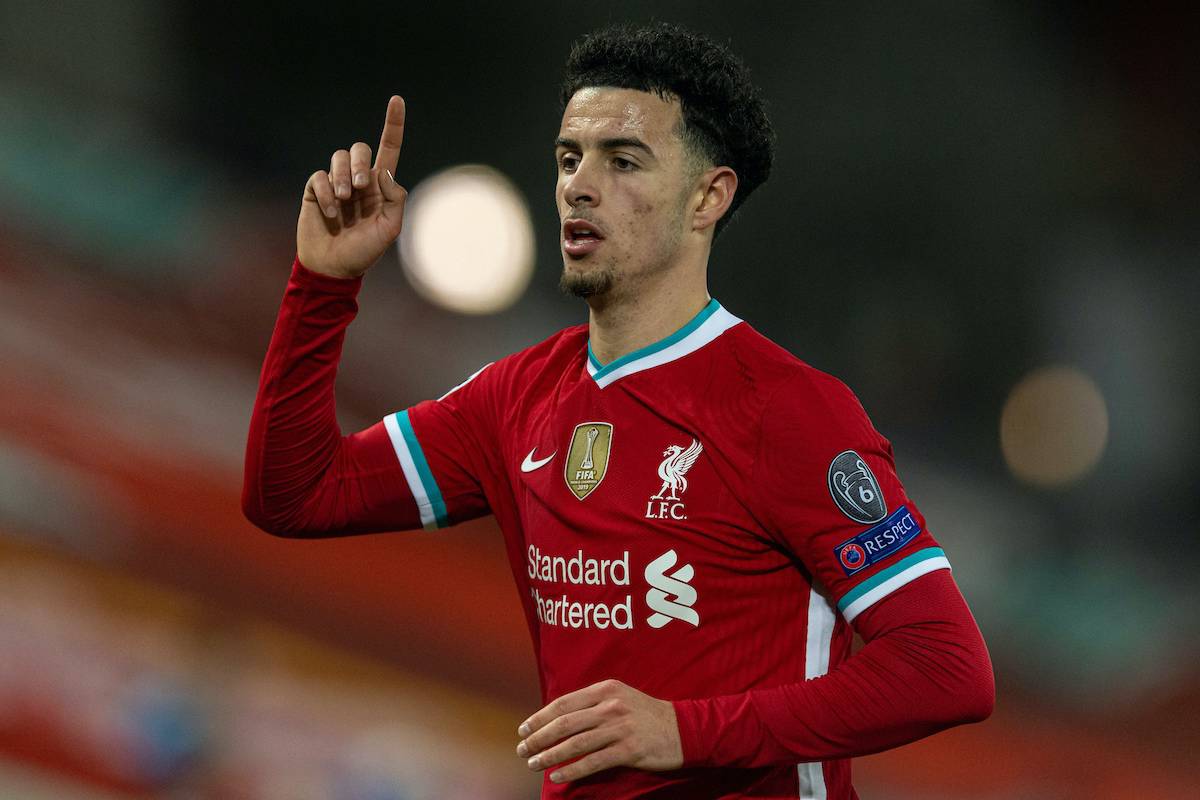 Liverpool’s campaign so far may be defined by the blow of big-name absences, but it is also marked by the rise of Curtis Jones to first-choice quality, writes Jason Hughes.

Liverpool’s authoritative victory over an exciting RB Leipzig side may have taken place almost 500 miles away from the Red Bull Arena, however, it will go down as an imperious away performance with the potential to reignite what has been a largely underwhelming season so far.

Ultimately, the Reds’ campaign has been typified by a seemingly never-ending procession of injuries, which have robbed Jurgen Klopp of key men for prolonged periods, resulting in disjointed performances and inconsistent results.

Ironically, however, it was one of the main beneficiaries of Liverpool’s minor muscle injury merry-go-round, a certain 20-year-old from Toxteth, who once again showed his class and maturity at the very highest level on Tuesday night.

Jones seemed to cover every blade of grass in the Puskas Arena, with his aggression and energy key to Liverpool’s efforts to press a nervous-looking Leipzig backline.

On the ball the Reds’ No. 17 was typically impressive, registering 60 touches and 34 accurate passes, one of which will go down as an assist for Sadio Mane – albeit with a helping hand from Nordi Mukiele.

Jones’ performance in Budapest was the latest in an ever-growing list of displays which suggest that he is already comfortably at home in Klopp’s first XI and is destined for the very top.

While Jones came into the season with just 126 minutes of Premier League football under his belt, and was arguably eighth choice in midfield, the club’s seemingly perpetual injury crisis has offered him an opportunity that he has seized with both hands.

And he is unlikely to let go of it without a serious fight.

Maturity on and off the ball 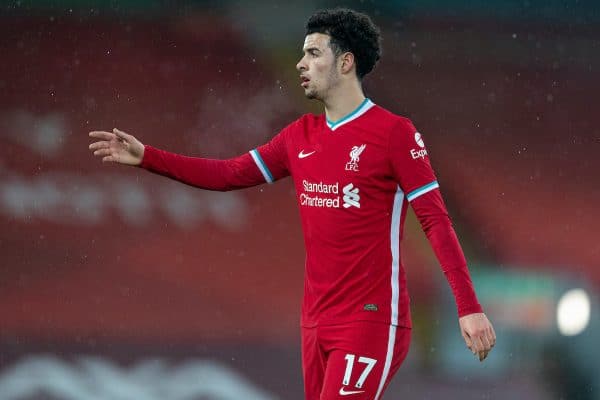 The young midfielder’s raw ability was never in doubt for those who witnessed him notch 17 goals and 10 assists in 20 games during his final season of youth football, before loudly announcing himself on the big stage with a sensational winner in the Merseyside derby.

But perhaps the most impressive aspect of his transition to senior football has been his understanding of the defensive side of his role.

The tactical and physical demands which Klopp places on his midfielders are well-documented, with the German’s No. 8s often expected to cover the spaces vacated by their adventurous full-backs and cut out counter-attacks.

The restraint and maturity with which Jones has performed these duties at such a young age is a credit to both his tactical intelligence and his willingness to sacrifice the more eye-catching aspects of his game for the benefit of the team.

This defensive work rate is highlighted by the fact that, of those to have completed five or more games, only three Liverpool players have bettered Jones’ average of 3.13 tackles and interceptions per 90 in the Premier League this season.

Furthermore, Jones has posted 5.66 successful pressures per 90, a figure topped only by Thiago and Diogo Jota.

Jones has therefore carried out his extensive defensive responsibilities with an aggressive dynamism that has seen him slot comfortably into Klopp’s engine room.

However, it is in possession, as much as out of it, where the young Scouser has demonstrated his maturity and reliability this season.

Ball retention in the midfield is crucial to the way Liverpool play, with the Reds’ advanced full-backs and high line leaving them vulnerable to the counter-attack when probing the opposition for chances.

It is in this area that Jones has excelled this season, miscontrolling just 1.01 of his 90.1 touches per 90 in the league.

Equally, Jones has averaged 79.35 attempted passes per 90, with a pass completion rate of 91.3 percent, which places him in the 93rd percentile of Premier League midfielders and is bettered only by Gini Wijnaldum and Fabinho in the Liverpool squad.

These numbers emphasise the security which Jones’ technical ability and understanding of the game have brought to the Reds’ midfield, and demonstrate his development from an attacking midfielder brimming with flair into an accomplished and consistent No. 8 who fits perfectly into Klopp’s style of play.

However, while he has adapted almost seamlessly into the dependable and tactically astute player that Klopp requires him to be, Jones’ creativity and attacking intent continues to shine through, adding a new dimension to the Reds’ midfield.

With the exception of Thiago, no Liverpool midfielder has bettered Jones’ 2.54 shot-creating actions per 90, demonstrating the No. 17’s creativity when given license to get forward.

Live passes (non-dead ball) account for 1.82 of these actions, and while Jones’ passing has been extremely reliable this season, it would be wrong to label it safe or unambitious.

In fact, in this season’s Premier League, he has averaged 8.42 passes into the final third per 90 and 1.72 into the penalty area.

These numbers are enough to place Jones in the top seven percent of Premier League midfielders for both metrics, while only Jordan Henderson and Thiago have completed more passes into the final third in the Liverpool squad. 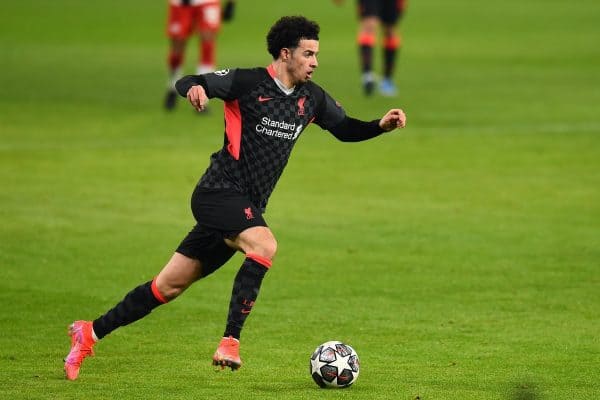 Furthermore, Jones has regularly exhibited his natural dribbling ability this term, averaging 10.45 progressive carries per 90 and racking up a progressive carrying distance of 190.45 yards a game.

This direct dribbling has seen Jones complete 3.15 carries into the final third per 90 and 0.61 into the penalty area.

Despite only turning 20 last month, Jones has more progressive carries than any other Liverpool player and ranks in the 97th percentile of all Premier League midfielders.

This dynamic approach has the potential to offer Liverpool a new dimension from midfield, with Jones’ powerful running providing another tool for breaking down defences.

While injuries and ill fortune may have initially paved the way for Jones to become a regular in the first XI this season, there can be no doubt that he now retains his place on merit alone.

While next season will bring new challenges for the youngster, with Henderson and Fabinho set to return to the midfield, he will no doubt be eager to meet them head on.

Furthermore, the club’s continued silence over Wijnaldum’s contract situation has become increasingly deafening and while a dramatic U-turn may yet see the Dutchman extend his stay on Merseyside, his seemingly inevitable departure draws nearer with every passing week.

Before long, Klopp will have to decide how best to fill the imminent Gini-shaped hole in his midfield, and as it stands few are better-placed to fill it than our own Curtis Jones.

When fans finally return to Anfield, they will undoubtedly be singing about a second Scouser in our team.