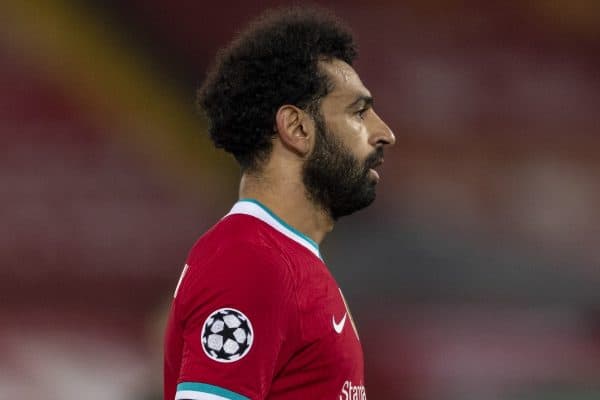 Liverpool are already set to play at a neutral ground for the first leg of their last-16 tie with RB Leipzig in the Champions League, but could be forced to play away from Anfield in the second leg, too.

The current regulations around Europe relating to travel are fast-changing and different from nation to nation, which is leading to some obvious problems as continental football prepares to start up again.

Last week, it emerged that the Reds will head to Budapest and the Puskas Arena to face the Bundesliga club in the first leg, as German regulations would not allow Liverpool to play the game without quarantining first.

Now it has appeared the reverse is also true: Leipzig could come to Anfield to play the second leg, but then wouldn’t be allowed back into Germany afterwards without an isolation period.

The Times report that “the German government has informed Leipzig that they would need to quarantine upon their return from the second leg” – and given they have Bundesliga commitments, it poses an obvious problem.

As such, Liverpool “are already looking into possible alternative venues” as UEFA regulations state that the home club are held responsible for ensuring both teams are able to fulfill the fixture.

A report on the potential of this pitfall in the Mail earlier in the season stated UEFA’s view and rules:

If COVID-19 restrictions affect a visiting club, the home club must propose a suitable alternative venue which may be in a neutral country and if the home club fails to propose such a venue, the visiting club may be awarded a 3-0 victory.

The same applies the other way round though: if restrictions of a visiting club’s own national/local authority prevent them from traveling, the home club must propose a suitable venue which the away club is able to access – or UEFA appoints – and again if either club refuses, the other may be awarded a 3-0 win.

While it could simply be that both legs are held at the same location in Hungary, there are wider questions and implications to consider.

The Times report suggests that, with Man City and Chelsea also affected in the Champions League and several Europa League ties also likely to be switched, European format this season could have to revert to a single-game knock-out affair.

Last term, the solution was to play all the knock-out games and the final over the course of a couple of weeks in a single location at the end of the season; it would require some very rapid rescheduling to do the same this time around, with the Euros on the horizon too.

As a result, the current solution is both ironic and ridiculous: to comply with bans intended on reducing travel and the spread of Covid, both teams will now likely have to travel more and to entirely different locations to ensure they can complete the tie.