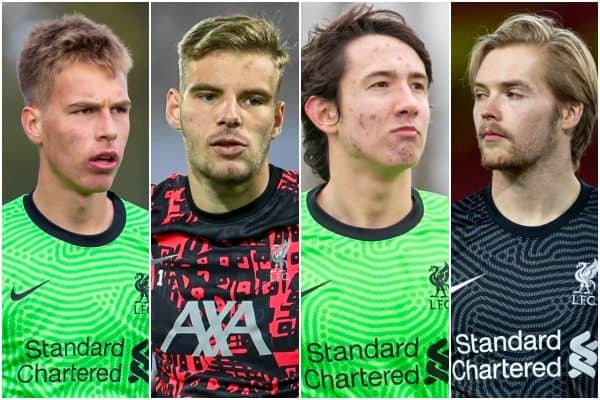 Liverpool have signed a collection of young goalkeepers over the past couple of seasons, but there’s a specific reason that several have been brought in – including the latest addition in January.

Alisson Becker is the undisputed first-choice stopper for the Reds, with Caoimhin Kelleher having this season usurped Adrian as his back-up.

After those three seniors, there rages an intense battle for game time and prominence within the Under-23s and Under-18s ranks, with as many as half a dozen young hopefuls all pushing to play each week.

Of course, goalkeeper isn’t exactly a position which is usually rotated or involves in-game substitutions, meaning some regularly miss out – but as youth keeper coach Mark Morris has explained, that’s precisely the role some are brought in to fill.

The U23s coach says that the Reds like to always have one or two “training keepers”, as he puts it, to allow sessions to run as smoothly as possible with the right personnel in place to mimic match realism.

In most cases, the players signed up to fill this role fit a particular set of characterstics: free transfers, great mentality, looking to improve their own game…but knowing that isn’t likely to come with matches.

Liam Hughes signed from Celtic on a free in January, replacing Ben Winterbottom who was the most recent player who filled that role at Kirkby – he has now departed for Brentford which is evidence, says Morris, that the plan continues to be mutually beneficial.

The Reds get the numbers and the continuity they want, and the players get the chance to improve with better coaching, facilities and the chance to move on and progress their careers elsewhere.

“Ben can go and push his career on; he is part of the B Team there, he is training with the first team at Brentford, he’ll play B Team games, again which we couldn’t guarantee him. He’s gone to further his career.

“Liam was basically back in Northern Ireland waiting to go on trial at places and see what he could get.

“The personality we wanted to come in and train is a tricky one; they have to know the reason they’re coming in and not be knocking on our door after two or three months saying, ‘I’m not playing.’

Andy Firth, Lawrence Vigouroux and Kai McKenzie-Lyle have all moved on to Rangers, Leyton Orient and Cambridge United respectively after also being utilised as training keepers with the Academy.

Meanwhile, Jaros has moved to Irish side St. Pat’s Athletic, giving him senior action in a meaningful environment on a regular basis.

In turn, the remaining ‘keepers at the Academy will see their own game time chances improved for the U23s and 18s.

The reality of the goalkeeping position and the elite man between the sticks for the Reds is that few will ever get the real opportunity to establish themselves as a first-team option for Jurgen Klopp.

But that’s true for all positions, and ensures that only the very best get through to senior scene – just as Trent Alexander-Arnold and Curtis Jones have managed.

Kelleher is the path and the role model for these younger goalkeepers to follow, and his success in playing nine times for the first team so far and pushing himself up the order of preference further proves that, if the players are good enough and show the right improvements, they will be given their chance.

The processes in place at the Academy are to the eventual benefit of all, whichever level that takes them to.