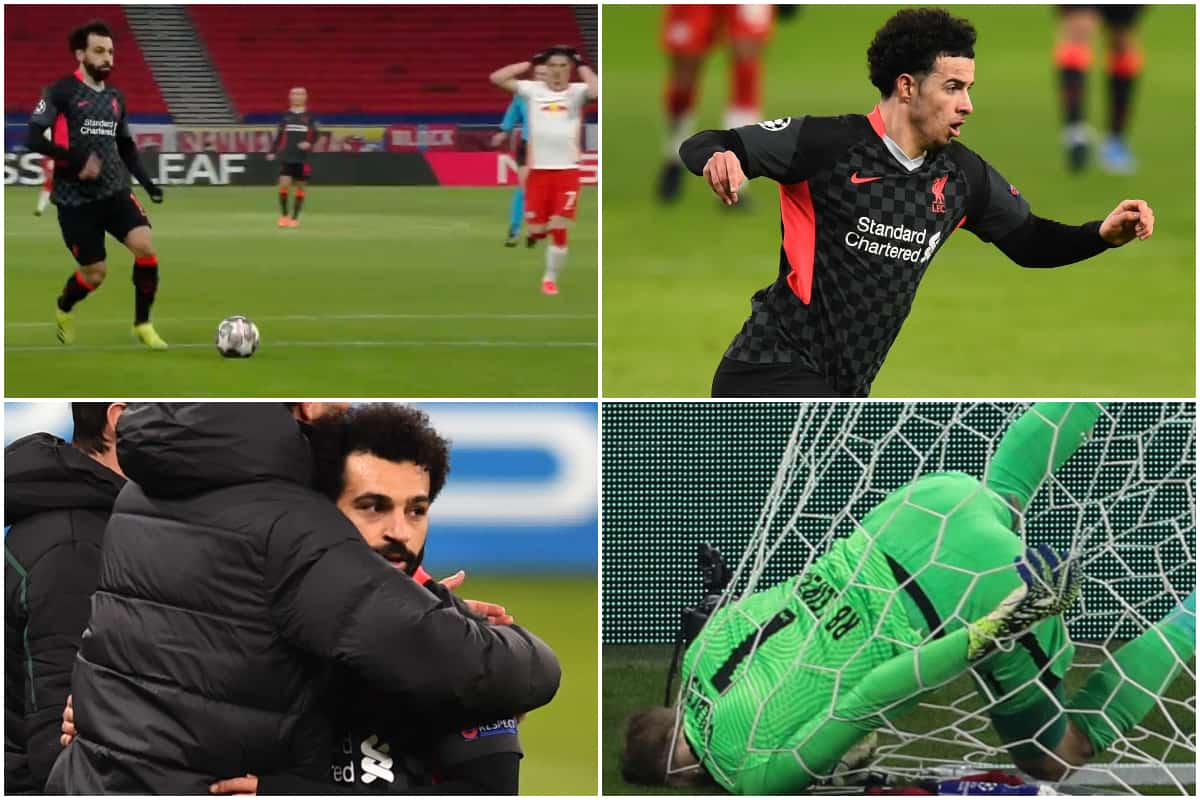 Mohamed Salah delivered on his promise and Peter Gulacsi became a meme in defeat to his old club as Liverpool surged to a 2-0 victory over RB Leipzig on Tuesday.

The Reds were widely considered underdogs for the tie in Budapest, having suffered successive defeats to Brighton, Man City and Leicester in the Premier League.

But inspired by Jurgen Klopp‘s defiant pre-match address, Liverpool put one foot in the Champions League quarter-finals with a 2-0 away win in the last 16.

Leipzig were, nominally, the home side, with the first leg played in Budapest, and they still had chances to punish the Reds’ makeshift defence, only for wasteful finishing and the interventions of Alisson to keep them at bay.

Ultimately, goals from Salah and Sadio Mane – capitalising on mistakes at the back – earned Liverpool a priceles win, and momentum heading into the Merseyside derby.

It was an eventful night at the Puskas Arena, and here are five things supporters noticed in a big victory.

After error-strewn performances against City and Leicester, it was heartening to see Liverpool benefit from slip-ups from their opponents on Tuesday.

The first, for Salah’s goal, came via an overhit pass from Leipzig captain Marcel Sabitzer, which evaded the hapless Lukas Klostermann and allowed the Egyptian King through on goal.

Sabitzer knew the price he had paid before Salah had even put it past Gulacsi for 1-0, and his reaction summed it up.

Before the scoring spree began in the second half, an open first 45 minutes played out as both sides had chances to break the deadlock.

Surprisingly, one of the most convincing opportunities came through Andy Robertson, who almost profited from a wayward clearance from the onrushing Gulacsi, close to the halfway line.

The left-back picked up the ball, looked up and lofted a long-range effort that just missed the top corner, leaving a scrambling Gulacsi to soar into his own goal, to the extent which his head went through the netting.

The Hungarian, who was on the books at Liverpool for six years between 2007 and 2013 but failed to make a single first-team appearance for the club, was left disappointed at full-time.

It was, however, great to see Gulacsi catching up with not only goalkeeping coach John Achterberg at the final whistle, but also Jordan Henderson, who he joined in the Reds’ matchday squad on 18 occasions during his time at the club. 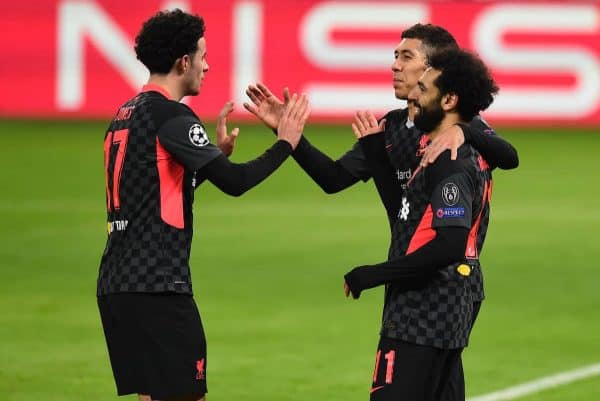 There were a number of standout performances for Liverpool in Budapest, but perhaps the most so was that of Curtis Jones, who excelled in his debut in the Champions League knockout stages.

The 20-year-old more than held his own in an intense contest, with his ability to keep possession and, more importantly, make things happen towards the final third helping the Reds to victory.

All #lfc players stood up to be counted tonight, none more so than Curtis Jones. Just turned 20 but played with such maturity. Clever in possession, creating Mane's goal, also turning one poor ball from Firmino into a good one with quick reactions. No ego, just hunger ? #RBLLIV

I’m disappointed to learn that all the changing of the guard talk tonight is actually about Kylian Mbappe and not Curtis Jones.

One of Jones' best performances for Liverpool. So, so impressive both in and out of possession. Completely belongs at this level now.

Curtis Jones. Has seen LFC sign a number of midfielders over the last few years but worked hard and taken advantage of every opportunity he has been given. He is now an integral member of this team. Outstanding player

It didn’t go unnoticed, and with Klopp surely aware Jones should be a regular starter from this point, it could be that Gareth Southgate is now paying closer attention too.

Salah delivers on his promise

Following the weekend’s 3-1 defeat to Leicester, Salah took to social media in a rare and much-welcome battle cry.

“We are champions and we will fight like champions,” he told supporters, before adding “that is my promise to all of you.”

Salah has been one of Liverpool’s most consistent players throughout the campaign either way, but on Tuesday he stepped up again, with his goal taking his season’s tally to 24 – one more than in the entirety of 2019/20.

When the Egyptian King makes a promise, he delivers.

The return of the Champions League provided another illuminating comparison between the quality of refereeing in the Premier League and elsewhere in Europe.

Liverpool’s recent games – and the whole of the English top flight this season – have been dogged by strange calls from officials, whether on the field or in the VAR booth, but Tuesday night saw a more decisive, consistent approach.

It wasn’t without controversy, of course, with Roberto Firmino‘s first-half header ruled out after Mane was adjudged to have taken the ball off the field, but the approach pleased fans.

One of the most refreshing things about watching Liverpool in the Champions League is seeing Mane and Salah get free kicks when they are fouled.

The Premier League boasts many of the best players in the world – should it not be the same with its officials?