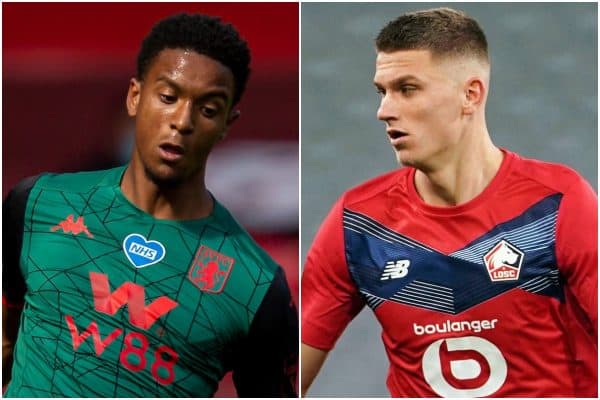 Liverpool’s centre-back search for the summer continues to take in names, with Aston Villa‘s Ezri Konsa now reported to be under consideration by the Reds.

Tyrone Mings is usually the Villa man to get the headlines at the back, being the England international and occasional captain.

But in truth, since the resumption of Premier League action post-lockdown 1.0, it’s Konsa who has been far more consistent and, from a Liverpool perspective, the much better footballer.

He is now tipped for an England call-up and the Athletic‘s David Ornstein says the Reds are among the sides looking at him with a view to a summer transfer.

Tottenham are also listed as keen, with both clubs needing a summer upgrade at the back, while the English FA are likely to make a move soon too as Konsa is eligible for DR Congo, Angola and Portugal.

Konsa has good pace, is extremely confident on the ball and from a defensive standpoint ticks many boxes: bravery, reading of the game and decent in the air, if not utterly dominant.

The Villa man is just the latest name to be linked with Liverpool though, with two others heavily reported to be of interest seeing their names in transfer headlines over the weekend.

Firstly, Dayot Upamecano is now firmly off the table after agreeing to leave RB Leipzig for Bayern Munich in the summer.

The unsurprising move sees the Bundesliga champions strengthen further by weakening a rival – a favourite move of theirs to ensure continued domestic dominance.

More interestingly, French media outlet Canal+ claimed over the weekend that a deal had been struck by Lille to sell Sven Botman to “an unnamed major European side”.

The deal is for summer and worth between €40-45 million, according to the report, with Ligue 1 reporter Jonathan Johnson further clarifying that Canal+ referenced “a big English club” after the Reds’ January interest.

There’s no prospect of a quick announcement, though, as the rumour of a deal being finalised was quickly shot down.

Noted journalist Mohamed Bouhafsi said there’s no agreement in place yet, while Botman’s own agent also denied the claim.

It’s worth remembering the social media treasure hunt of sorts that Botman, or his agency, appeared to lead people on during the last window.

Perhaps this is just the latest step to keep interest and intrigue high in the client – not that it should be needed with Lille sat top of the table in France and looking to hold off PSG for the title.