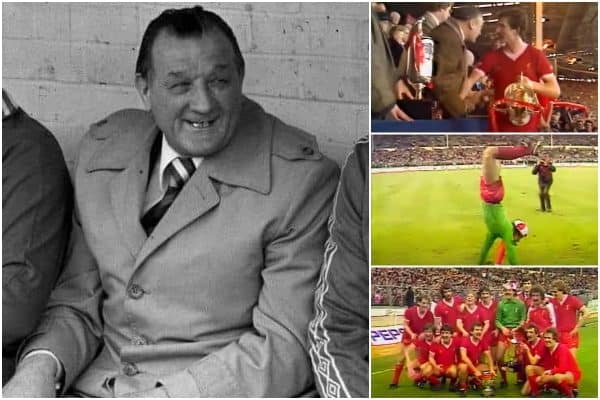 Two trophies, one League Cup final victory and a show of mental warfare that saw Liverpool become only the second team to successfully retain their title.

‘Liverpool legs outdance Tottenham‘s Latin beat’ was the Guardian’s headline after a 100,000 capacity crowd at Wembley witnessed a final to remember.

The year was 1982, Bob Paisley was the manager, the Reds were on the cusp of their 13th top-flight title and were defending European champions.

They too were the reigning League Cup holders after lifting the trophy the season prior for the very first time in the club’s 90-year history having toppled West Ham.

And their bitter crosstown rivals Tottenham would be next up in the bid to dethrone Paisley’s champions and deny his men a sliver of history.

They had every right to walk with authority into the home of English football on March 13, 1982, after overcoming Man United and Brian Clough’s Nottingham Forest on their way to the final dance.

That was in addition to a 16-game winning streak and a League Cup campaign that had yet to see them concede a single goal in a historic run, something ex-Red Ray Clemence had more than a part to play in.

For Liverpool, Arsenal and Ipswich Town – a fierce rival in the league – were swatted aside to set up a first-ever final between the two clubs which would later be described as “fiercely competitive and dramatic” by commentator Brian Moore.

The Reds had success and experience in their bones, seeds laid by Bill Shankly and further nurtured by Paisley, and they very much looked the part with steely determination and a jovial spirit as the two teams were first presented to Sir Matt Busby prior to kickoff.

But it would be Spurs who would strike first. Not an unfamiliar position for Liverpool.

It arrived off a clumsy finish from the boot of Steve Archibald after Mark Lawrenson failed to clear his lines merely 11 minutes into proceedings. Advantage to the Londoners.

An equaliser was immediately sought after as Paisley’s men looked to get one over on Clemence in the first meeting since his Anfield departure, but 76 gruelling and nailbiting minutes would need to be navigated before the red side of Wembley could erupt.

Spurs were “already toasting their victory” when the 87th minute came around but Ronnie Whelan, on his first visit to the ground, ensured it would be all too premature thanks to an instinctive shot into the corner to force extra time.

And this is where Paisley’s lesson in psychology paid dividends as he famously instructed the Reds not to sit on their haunches, as Tottenham did, after normal time.

“He was bellowing: ‘Get up off your feet, don’t them let them see you are tired.’ It stemmed from Shankly, who would never let an opponent see that you were weak,” Phil Neal recalled.

It was one red wave after another and while it took until the second half of extra time, Whelan would finish off an Ian Rush and Kenny Dalglish interchange to all but put two hands on the trophy.

“I was so over the moon after getting my second that I ran over the running track to celebrate with our fans. Only when I got there did I realise it was such a long way back to the pitch and I was so tired that I barely made it!” Whelan recounted.

Rush would then kickstart his love affair with Wembley with his first of many goals moments before the full-time whistle to send the travelling Kop into ecstasy over the 3-1 win.

Spurs led for 75 minutes and Liverpool just nine, but it was Paisley’s men who would defend their title, achieved for only the second time in the history of the competition after Forest, and parade the club’s 22nd major honour around the Wembley turf.

It was a walk of honour that saw Bruce Grobbelaar show off his acrobatic skills and would include not one but two trophies, picking up the original Football League Cup and the newly named Milk Cup.

“I was getting ready to turn sour on the Milk Cup,” Paisley joked in the dressing room after his latest success.

But it would never be the case for Liverpool as they would also win the next two editions, a return which played a significant role in kickstarting the Reds’ current title as the most successful club in the history of the competition.