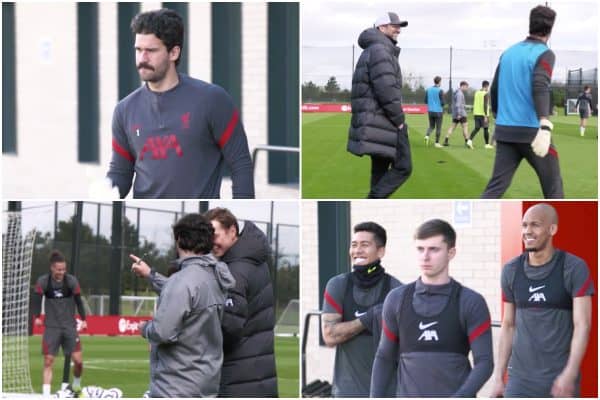 Liverpool returned to Kirkby on Monday to begin preparations for Saturday’s trip to Arsenal, with Jurgen Klopp keeping four youngsters as part of his senior squad.

The Reds not on international duty returned from a short break to prepare for a visit to the Emirates this weekend, with Roberto Firmino back from injury.

Naby Keita was also involved, having been recalled from the Guinea squad early, while Klopp retained a clutch of the academy players initially called up earlier in the month when numbers were short.

There was no sign of Melkamu Frauendorf, Tyler Morton, Conor Bradley or Kaide Gordon, who were involved at the start of the international break, while Jarell Quansah, James Norris and James Balagizi were unavailable.

Ready for the week ahead ?? pic.twitter.com/vCj6DYwqLp

Klopp led a rousing rendition of Happy Birthday for elite development coach Vitor Matos, who turned 32 on Sunday, before the squad split off for drills, rondos and small-sided games.

Along with Firmino and Keita, Alisson was part of the senior cohort, and the Brazilian was sporting an impressive moustache, joking with Klopp that he looked like Ian Rush:

The boss and @Alissonbecker on the new facial hair on show ? pic.twitter.com/mK39x1rMCR

James Milner has worked at Kirkby throughout the break, with the squad given the option to either stay at the training ground or follow individual programmes from home, and the vice-captain clearly relished the return to action:

Is that what they call in Liverpool – “being sent for the Echo”? #ortheboltonnews #chopchop #firstthingtopasshiminawhile pic.twitter.com/YUTAQxZ3Ik

Trent Alexander-Arnold, Fabinho, Alex Oxlade-Chamberlain, Adrian, Rhys Williams and Ben Davies were also part of the squad, with the rest of the first team to rejoin later in the week.