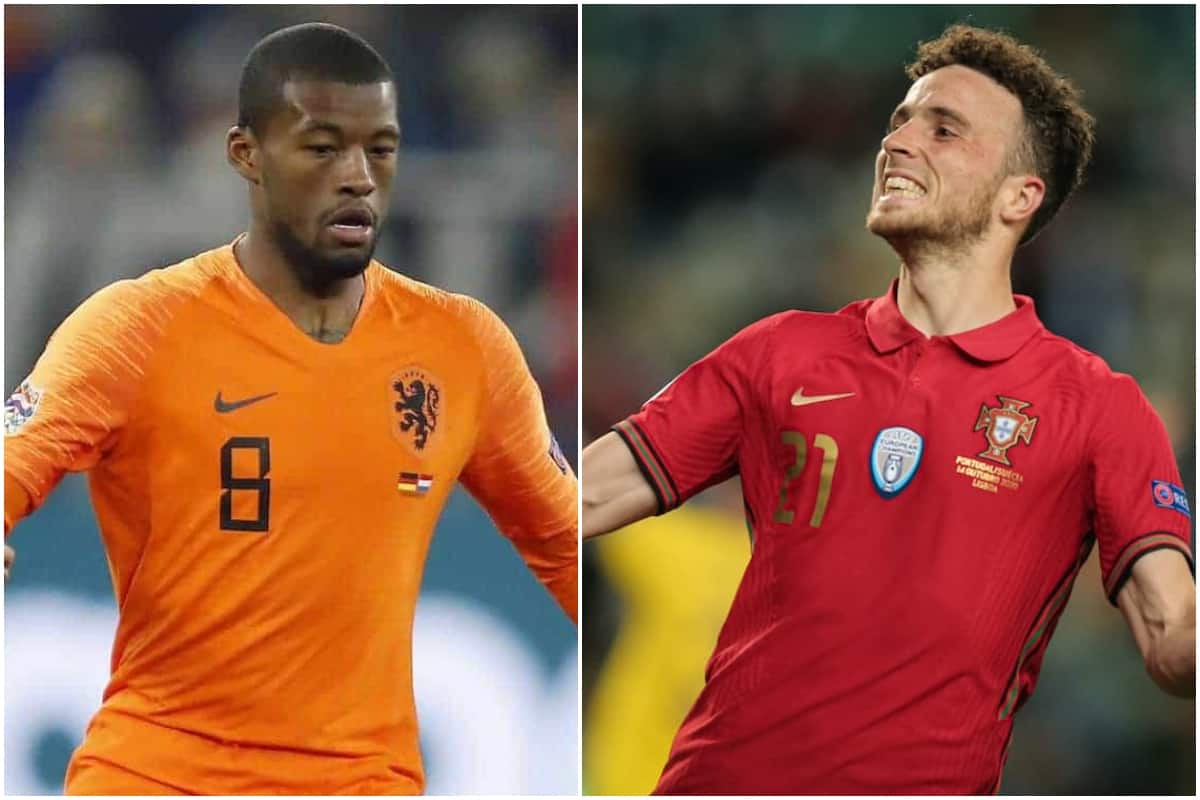 Diogo Jota scored two headed goals in 25 first-half minutes in what proved to be a frustrating evening for Portugal in their World Cup qualifying campaign.

It was another night of international action for the Reds and after being an unused substitute earlier in the week, Jota was reinstated back to the XI on Saturday.

It came in Portugal’s second qualifier against Marko Grujic‘s Serbia, who was an unused substitute, and Liverpool’s No. 20 got his side off to the perfect start after setting up a 2-0 lead after just 36 minutes.

The 24-year-old lined up alongside Bernardo Silva and Cristiano Ronaldo, playing on the left of the front three and he broke the deadlock after 11 minutes.

It came off the back of an inswinging cross from Silva after Jota had drifted toward the back post before steering his header powerfully beyond Marko Dmitrovic.

Twenty-five minutes later and Jota doubled the lead after steering Arsenal‘s Cedric Soares’ cross in off the left upright after expertly manoeuvring himself into the centre of the penalty box.

Victory looked within their grasp, but Serbia would level the scores halfway through the second half thanks to Aleksandar Mitrovic and Filip Kostic.

Controversy then ensued following Jota’s withdrawal in the 85th minute as Ronaldo’s last gasp effort was adjudged not to have crossed the line – with no technology to confirm nor deny.

For Gini Wijnaldum, the shock midweek defeat to Turkey was put behind him and the Netherlands as they put two unanswered goals beyond Latvia to collect their first three points of the campaign.

Steven Berghuis and Luuk de Jong scored either side of half-time in front of 5000 of their fans in Amsterdam after the government sanction a study into crowds within a pandemic.

Wijnaldum captained the side once more in Virgil van Dijk‘s absence and was one of the players to look to bombard Roberts Ozols’ goal throughout, but his aim was wayward with six shots off target.

He would be withdrawn after 79 minutes and cut a frustrated figure in his touchline talk with Frank de Boer, which he cleared up post-match.

“My substitution? Yes I was a bit disappointed. But we shouldn’t make it bigger than it is,” he explained. “On the one hand I was very disappointed, but on the other hand it is also good for the group process when other guys play too.”

And it was a case of action off the bench for Ozan Kabak and Neco Williams after their midweek exploits in their respective XIs.

The former played the final four minutes as Turkey secured back-to-back victories after putting three beyond Norway, while Neco Williams was handed 25 minutes in Wales’ impressive 1-0 friendly win over Mexico.