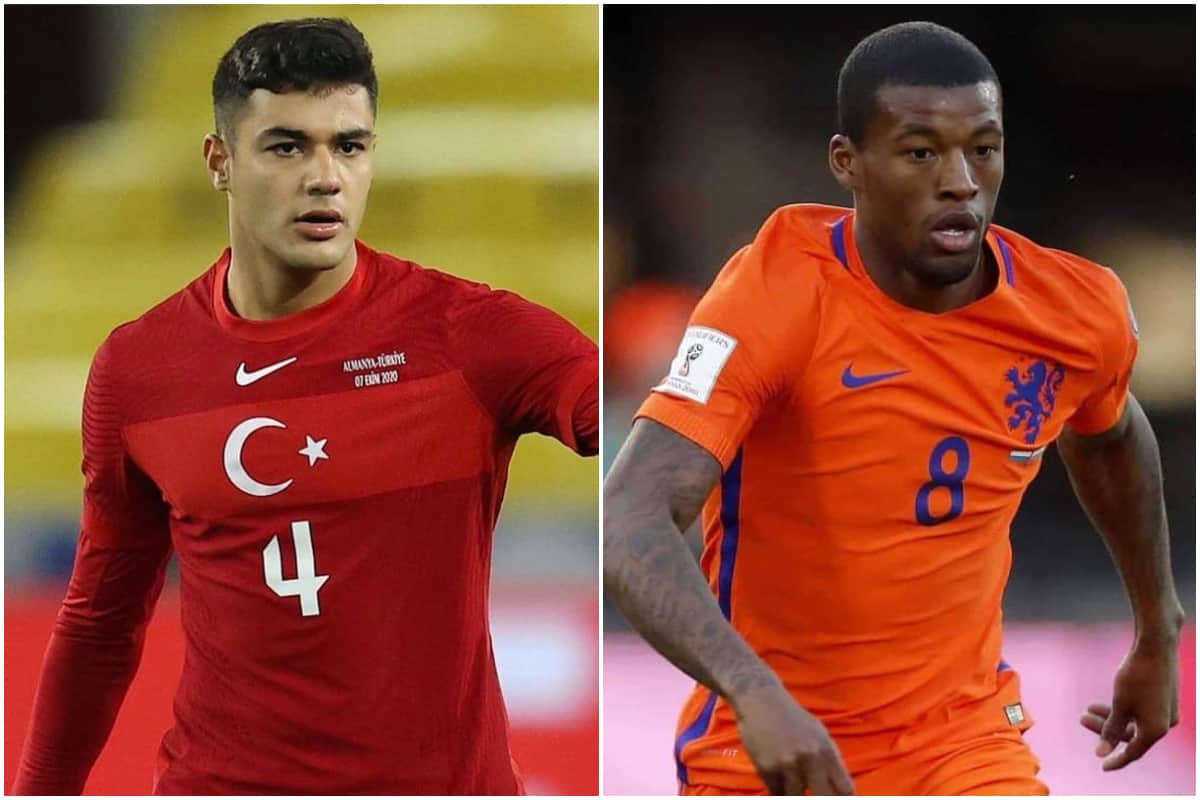 The first night of the international break pitted two Liverpool players against each other, and it was Ozan Kabak who emerged victorious against Gini Wijnaldum.

Kabak and Wijnaldum were both in action on Wednesday evening as Turkey and the Netherlands kicked off their World Cup qualifying campaign in Istanbul.

While both will be hoping to be back at the Ataturk for the Champions League final come May 29, this time their focus was on their national teams, at the expense of their team-mate.

It was a miserable start for the Netherlands on the road, then, as they went 3-0 down in the first 46 minutes, as Burak Yilmaz scored two and Hakan Calhanoglu netted another without response.

Davy Klaassen and Luuk de Jong clawed it back to 3-2 with two goals in two minutes midway through the second half, only for Yilmaz to complete his hat-trick soon after and seal the win.

The result continues a meagre start to life as Netherlands boss for Frank de Boer, as though it was his first defeat in charge, it was also his fourth game of six without a win.

Kabak has been hailed for his composed display at centre-back, in which he led the Turkey side for touches (59), passes (36), pass accuracy (86.1%), clearances (13) and even created the joint-most chances (one).

It was his goalline clearance, after Matthijs de Ligt struck the post with a header, that kept Turkey in the lead going into half-time, but Kabak was also guilty of conceding a penalty in a tussle with De Ligt in stoppage time.

Memphis Depay’s spot-kick was saved, though, on a night of frustration for the Netherlands, which saw Wijnaldum deployed as a No. 10 but with little success.

Elsewhere on Wednesday, Naby Keita started and played the full 90 minutes as Guinea booked their place at the Africa Cup of Nations with a 1-0 victory over Mali.

Keita was fielded as an advanced midfielder in a game decided by Seydouba Soumah’s second-half strike, and with Guinea now qualified for next year’s tournament, he can comfortably return to Merseyside early.

Liverpool requested Keita do not travel with his national team for their Group A clash with Namibia on Sunday, due to the country being on the UK’s red list, which would have required the 26-year-old to quarantine upon his return.

The No. 8 will, however, now depart for the Africa Cup of Nations midway through next season, with the tournament to be held in Cameroon between January and February of next year.

Sadio Mane‘s Senegal are also already qualified, while Mohamed Salah and Egypt can clinch their place with at least a draw against Kenya on Thursday evening.

Back in Europe, Neco Williams and Harry Wilson both started as Wales suffered a 3-1 loss at Belgium, with Wilson scoring the opening goal with an excellent finish as part of a flowing move.

Williams played the full 90 minutes as a left wing-back, while Wilson was withdrawn with 23 minutes to play, as Kevin De Bruyne, Thorgan Hazard and Romelu Lukaku sealed the win for Belgium.

Finally, Diogo Jota was an unused substitute as Portugal earned a 1-0 win over Azerbaijan, with manager Fernando Santos rotating to give the likes of Pedro Neto and Andre Silva an opportunity.

Curtis Jones is the first up, though, as England kick off the Euro Under-21 group stage at home to Switzerland.