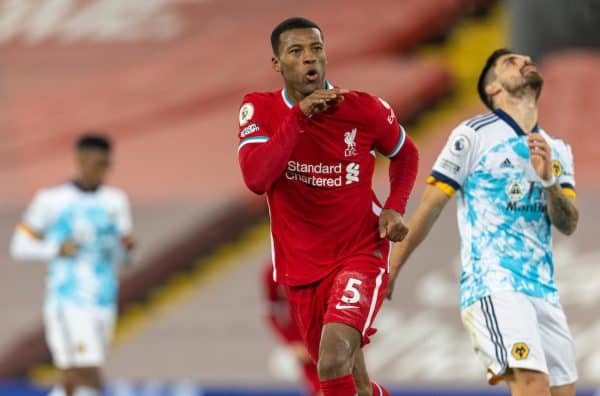 Shot at momentum thanks to away comforts – Wolves vs. Liverpool Preview

After finding the route to victory on the continent, Liverpool will be out to get their league campaign back on track when they meet a Wolves side starting to refind their feet.

Rolling into a matchday with a win the previous outing really does work wonders.

Especially when it is one that cemented Liverpool’s place in the final eight of this season’s Champions League, keeping alive the faint hopes of silverware.

The Reds were the dominant force against Leipzig and the 2-0 victory is one that will have provided a much-need pick me up for Jurgen Klopp‘s side.

But, thankfully, the lesson in taking their chances in front of goal did not prove to be a costly one as Mo Salah and Sadio Mane did enough.

A road trip to the West Midlands now awaits and will enable the Reds to put their Anfield woes behind them and aim to make it five wins from six away matches.

With the challengers for a top-four spot slowly drifting out of reach, Liverpool can ill afford any more dropped points should they wish to at least muster a final push in the last nine games.

For Nuno Espirito Santo and Wolves, a top half of the table finish will be on their agenda and after just one defeat in their last five, they will fancy their chances.

The manager has talked a lot about kickstarting some momentum and it would not hurt to do so with a second successive win for the first time since the end of January.

No new injuries to report on, yes you read that correctly and no, we’re not in a parallel universe.

The only, existing, concern heading into the clash is the fitness of Roberto Firmino who missed the Reds’ last two games with a knee injury.

Klopp was hopeful of being able to include his No. 9 in his squad on Monday but will not feel rushed in his timing with Diogo Jota, Mohamed Salah and Sadio Mane expected to start.

With five days between games there could be few, if any, changes from the XI who emerged victorious in Budapest.

It would mean Fabinho would be handed a successive start in midfield behind a centre-back pairing of Nat Phillips and Ozan Kabak.

The likes of Curtis Jones, Naby Keita and Xherdan Shaqiri will no doubt be pushing for selection.

For Wolves, they will remain without Daniel Podence, Raul Jimenez and Marcal for the clash.

Last 5 Away to Wolves (All Competitions)

So Liverpool have been generous in handing away records this season, but here’s hoping they don’t follow suit on Monday evening.

The Reds are undefeated in their last seven league trips to the Molineux Stadium, winning four and drawing three with an aggregate score of 12-3.

In fact, their last meeting on Wolves‘ home soil in January 2020 was the first time in five outings at their ground that Liverpool had conceded a goal.

How ideal would another win and clean sheet be? But any route to three points will no doubt be welcomed.

Speaking in his pre-match press conference, Klopp touched on his hopes of seeing a consistent centre-back partnership in Phillips and Kabak for the remainder of the season:

“We will see. I hope there will be [consistency], that they will stay fit.

“I cannot sit here and give guarantees for these kinds of things, but I heard nothing different so far so I think they will be available and it looked good [at Leipzig].

“If they’re physically ready to go again, which I hope, then why should we change it?

“It’s clear you want to have consistency and we never had it. It looked really good and so, of course, hopefully, they can play a lot of games, if not all of the rest, but if not then we have to find a solution again.”

Wolves vs. Liverpool kicks off at 8pm (GMT) and will be shown live in the UK on Sky Sports Premier League and Sky Sports Main Event, with coverage from 7pm.

Chris Williams has you covered on This Is Anfield’s matchday liveblog, hopefully keeping you entertained with his usual bias take for a Reds win, starting from 7.15pm