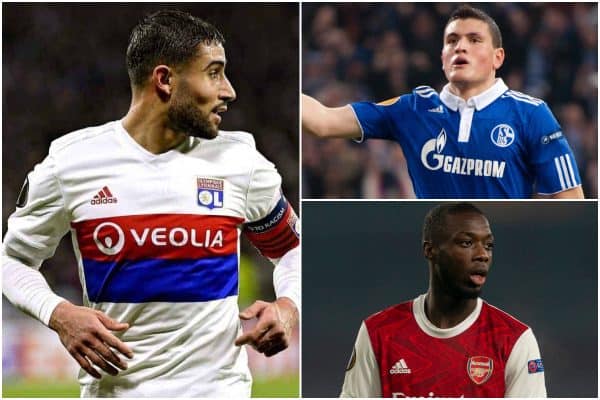 Silver lining: An XI of players Liverpool were lucky NOT to sign

Liverpool have conducted some superb business under Jurgen Klopp, but the Reds have also been fortunate not to sign some individuals.

It has been almost impossible to criticise the work Klopp and Michael Edwards have done in the transfer market over the past six seasons, as the Reds have returned to the pinnacle of English and European football.

Liverpool have made an endless stream of game-changing additions who have improved the fortunes of the club, whether it be Alisson, Virgil van Dijk, Mohamed Salah or Sadio Mane, to name just a few.

But what about those who were linked with the Reds and have ended up being disappointments?

Here’s an XI of players who fit perfectly into that category, all of whom reportedly caught Liverpool’s eye in and around Klopp’s tenure.

Alisson has been an incredible signing for Liverpool, but before his world-class presence arrived between the sticks, Butland was constantly tipped to head to Anfield.

During his younger years, he was considered England’s future No.1, but as time has passed it has become increasingly clear that the Reds were right not to sign him.

Butland spent both the 2018/19 and 2019/20 seasons in the Championship with Stoke, with no Premier League team convinced enough to snap him up.

He is now plying his trade at Crystal Palace but has been limited to just one solitary appearance in the FA Cup.

Trent Alexander-Arnold has made the right-back spot his own at Liverpool, and will hopefully continue to for years, but there was a time when they were searching for a player in that role.

Martin Montoya was one of those linked with a move during his time with Barcelona, and while he has enjoyed a perfectly solid career, he would have struggled to make the step up under Klopp.

The calibre of team that the Spaniard has played for has steadily dropped, going from Barca to Valencia to Brighton, before moving to Real Betis last summer.

The 29-year-old has shown his limitations and it is unlikely that he would have been any better than Nathaniel Clyne.

Before Van Dijk came along and solved Liverpool’s defensive issues, a number of individuals were tipped to be the Reds’ saviour at the back, under both Brendan Rodgers and Klopp.

Kyriakos Papadopoulos was one of them, following some dominant performances for Schalke, but a move never materialised.

Having departed for fellow Bundesliga side Bayer Leverkusen in 2015, the Greek’s career has nosedived, suggesting Liverpool’s rumoured interest was wide of the mark.

He only appeared once for RB Leipzig in 2016/17 and is now in Germany’s second tier with Hamburg, despite still only being 29 years of age.

Those ‘experts’ who ‘watched’ him every week may have just overindulged on YouTube!

When a player flops at Everton, you know Liverpool have done extremely well to avoid signing him!

Ashley Williams is exactly that, with the Welshman strongly rumoured to be joining up with former Swansea manager Rodgers during the latter part of his reign as manager at Anfield.

Fortunately, Williams never ended up in a Reds shirt and his spell at Everton between 2016 and 2019 was full of errors and his usual fake hardman act.

After spells in the Championship with Stoke and Bristol City, the centre-back hung up his boots in January.

Dejan Lovren have may been a divisive figure after arriving instead of Williams in 2014, but he looks like Van Dijk in comparison.

Before Andy Robertson arrived and became Europe’s best left-back, Liverpool were linked with a plethora of other players in that position.

Perhaps the most high-profile was Ricardo Rodriguez, who had caught the eye at Wolfsburg and looked an exciting long-term option.

While Robertson has gone from strength to strength, however, Rodriguez has never really kicked on, standing still at best.

In 2017, he joined a mediocre AC Milan side, becoming a regular but not enhancing his reputation, and he is now little more than a solid squad player at the San Siro.

Rodriguez is a perfectly good footballer, but Robertson has shown him how to become an elite left-back.

There was one summer in 2016 when it appeared as though Mahmoud Dahoud and Piotr Zielinski were heading to Liverpool every day.

Dahoud was considered a trendy option to come in and master the No.6 role in front of the defence, but he went on to join Borussia Dortmund the following year.

The German has been adequate for the Bundesliga giants, but only 33 starts in the league in four seasons speaks volumes about his role.

Liverpool’s midfield has been the least heralded area of the pitch during the Klopp era, but Fabinho, Jordan Henderson and Gini Wijnaldum, in particular, have mastered the job of providing consistent levels of industry and quality.

You have to wonder if Dahoud would have reached their heights.

Has there ever been a player closer to signing for Liverpool before the plug was pulled?

Nabil Fekir was the transfer story of 2018 at Anfield, with the silky attacking midfielder all but joining from Lyon, even being pictured in his new kit.

A knee injury was detected during his medical, however, and an exciting move was suddenly off the table, much to the chagrin of many.

While it was easy to feel frustrated at the time, the Frenchman has shown why he may not have been the right choice, failing to produce consistently influential displays for Real Betis.

In the meantime, Liverpool have won the Champions League, Club World Cup and Premier League, proving that the midfield wasn’t too shabby without him signing after all.

There’s nothing like a fancy foreign signing whetting the appetite during a transfer window – someone with attacking pizzazz who looks sublime, particularly in compilation videos!

Thomas Lemar was just that, standing out as a key man in a Monaco side that also featured Fabinho, Bernardo Silva and Kylian Mbappe.

Liverpool supposedly wanted to sign him, but Atletico Madrid acquired his signature in 2018, where he has since been an undoubted disappointment.

Only last week, Lemar was failing to impact his side’s Champions League defeat to Chelsea and the whopping £52.8million Atletico paid for him looks a real waste.

Just five goals and 11 assists in 104 matches for the La Liga side is a paltry return.

With Liverpool’s front-three of Salah, Mane and Roberto Firmino apparently in need of competition before the 2019/20 season, Nicolas Pepe was considered a strong option to join from Lille.

It was never easy to know how genuine the Reds’ interest was, but they appeared more than willing to allow him to join Arsenal over them.

Gunners supporters basked in the glory of pipping the then-European Champions to a supposed world-beater’s services, but that £72 million fee now looks laughable.

Pepe hasn’t played like the sixth-most expensive signing in Premier League history, too often flattering to deceive and looking one-dimensional on the right-wing.

Mario Gotze was one of Klopp’s favourite players during his glorious spell at Dortmund, with the pair almost having a father-son relationship.

In 2016, the German World Cup winner was tipped to come in and be a star addition to the Reds’ attack, as Klopp eyed up reinforcements.

Gotze was the popular, fashionable choice to come in, but Liverpool signed Mane instead, with the Senegalese a less glamorous addition.

History has shown that it was a masterstroke, though, with Mane the catalyst to the Reds’ success and Gotze becoming a shadow of the player he once was.

Fitness and health issues have played a part in that, but he never possessed the speed, power and work-rate to thrive for Klopp’s Liverpool like Mane has.

If Fekir was inches from being a Liverpool player, Loic Remy wasn’t far behind.

When Rodgers was looking to fill a Luis Suarez-shaped void in attack, the Frenchman emerged as a prime candidate to partly make up for the Uruguayan’s exit.

He was even on the verge of being given Suarez’s No.7 shirt, but the deal fell through at the eleventh hour after a failed medical.

Forgettable spells at Chelsea and Palace followed for Remy, before moving away from England and playing for Las Palmas, Getafe and Lille.

The summer of 2014 was dreadful for Liverpool, with the likes of Rickie Lambert and Mario Balotelli coming in, but there is no guarantee that the Frenchman would have fared any better.

Let us know who would make your XI in the comments section below.