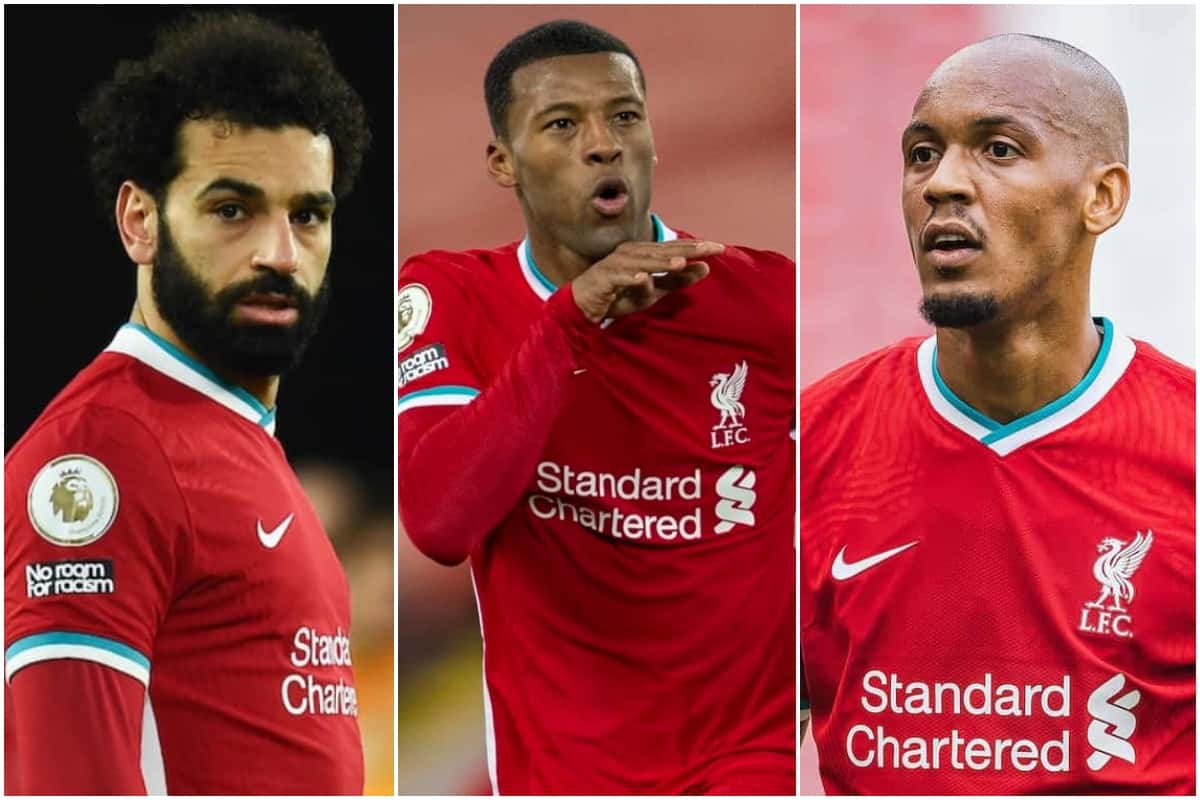 Liverpool’s season has not been smooth sailing, but within Jurgen Klopp’s ranks, there have been a number of Reds who have stood out above the rest.

Question is, who would you consider the Player of the Season to date for the Reds?

The campaign has been largely defined by injuries and resulting positional changes which has seen Klopp’s men struggle for consistency, and as such they currently sit seventh in the league.

But it is not to say there have not been leading contenders for the gong or those deserving of honourable mentions such has been their impact and ability to step in when needed.

As fans, we all value different traits when assessing overall influence and while this year has a narrower field when compared to the title-winning season, there are some more than worthy candidates.

CAMERON: I have to go with Fabinho. A rather grim period could have been even tougher had it not been for him filling in at centre-back, which he has done without a flicker of complaint.

I remember when he first came to Liverpool Pep Lijnders spoke brilliantly about his natural impulse to tackle forward and on the front foot in view of launching attacks. For him to resist that temptation so effortlessly and to adopt the responsibilities of a full-time centre-back so quickly has been remarkable.

The precision to his tackling has remained exquisite, while his calmness amid the chaos has been pretty breathtaking at times. If you were watching him play football for the first time, you’d have no reason to believe he was playing out of position.

And then against Leipzig recently he reminded all that he is still the best defensive midfielder the Premier League has to offer. A real master of his craft.

LEANNE: Had he not got injured, there’d be a very strong case for Diogo Jota given the impact he had at the start of the season. He was so often the man for all occasions, digging the team out of frustrating draws.

Fabinho is another who deserves a mention, given how well he responded to the impossible task of replacing Van Dijk and Gomez at the back. The Brazilian has hardly put a foot wrong, with his reading of the game and versatility invaluable for the injury-stricken Reds.

The fact both miss out is down to the sheer brilliance of Mohamed Salah.

Even in a season dictated by circumstances, he is no different.

Since joining in July 2017, he has looked like a man possessed, and while his world-class level of performance is now commonplace, the magnitude of what he is doing shouldn’t be taken for granted. Every time you think he can’t get any better, that he can’t pull off the seemingly impossible, he finds a way to prove you wrong.

To have scored 199 goals for the club, joint 13th in the club’s all-time goal scorers chart, in 233 games fewer than Ian St John is hard to comprehend.

His level of consistency is unprecedented and his influence on the side ubiquitous. A genuinely world-class player, one of the best we have seen, or will ever see, who has taken on responsibility and lit up this season with some phenomenal moments.

We are lucky to witness such a remarkable footballer.

SCOTT: In one part, this feels a bit of the choice obvious to me. In another, even I’m second-guessing my decision.

At times this season, Salah has been extraordinary. His current tally of 17 goals in 28 appearances in the league is already close to besting his total from last season, and his five in Europe have been vital in getting us to the quarter-finals of a competition we so desperately crave success in.

I think it was a bit of a tease on Mo’s part to start the season so hot — thinking back to his hat-trick performance in the opener against Leeds that made us think we were getting 30 goals from him this year.

He hasn’t set the world on fire every march, but nonetheless, he’s still the league’s joint top scorer and deserves the nod as Liverpool’s Player of the Season.

JOANNA: For the sheer volume of games, consistency and responsibility he has displayed, Wijnaldum has been a standout in his own right.

It does not take away from others as Fabinho’s unselfishness to drop back and showcase his world-class centre-back qualities is worthy of more than just admiration, as is Salah’s incredible goal scoring feats which certainly feel under-appreciated.

But for such a crazy season that Liverpool have experienced, you feel it in some ways redefines the rules and criteria.

Klopp recently noted Gini as our “most consistent player” having alternated between the No. 6 and 8 role, while also covering defence in-game when required.

And he is one who if you’re not watching closely can feel as though the game passes him by, but his sheer strength and ability to hold the ball is influential. He’s one that you’ll miss when he’s no longer here, and that looks to be on the horizon.

A left-field choice for some perhaps, but availability is key for any athlete and Wijnaldum excels in just that.

STEPHEN: Robertson has been ever-present this season and although results on the pitch haven’t been what we’ve become accustomed to in recent years, the Scot has always stood out.

It’s hard to ignore that the nature of Liverpool’s performances have cast a negative light on a glistening 18-months and the early part of the dysfunctional season, but the 27-year-old has also been one of the star players not only on the pitch but off it too.

Humbling defeats to Chelsea and Leicester left many down in the dumps but post-match he spoke with qualities of a true leader, taking the brunt of the criticism on the chin whilst analysing the downfalls of his own teammates. It is not exactly great to see considering the run of results which made grim viewing, but it shows when Virgil van Dijk, Jordan Henderson and the experienced James Milner are out the squad, we have a new leader rising from their shadows.

Back to his on-field antics, he has featured in every league match, chipping in with a goal and five assists, and has played the most minutes of any other player. The lack of balance certainly hasn’t helped him replicate his marauding runs to the byline of seasons gone by, but he has been a reliable and often unnoticed stalwart.

Despite a forgettable start to 2021 which ultimately derailed a promising title defence, Robbo has been a shining light this season. With Wijnaldum’s exit pending, he’s the right choice to be nominated into the leadership group as a future Liverpool captain.