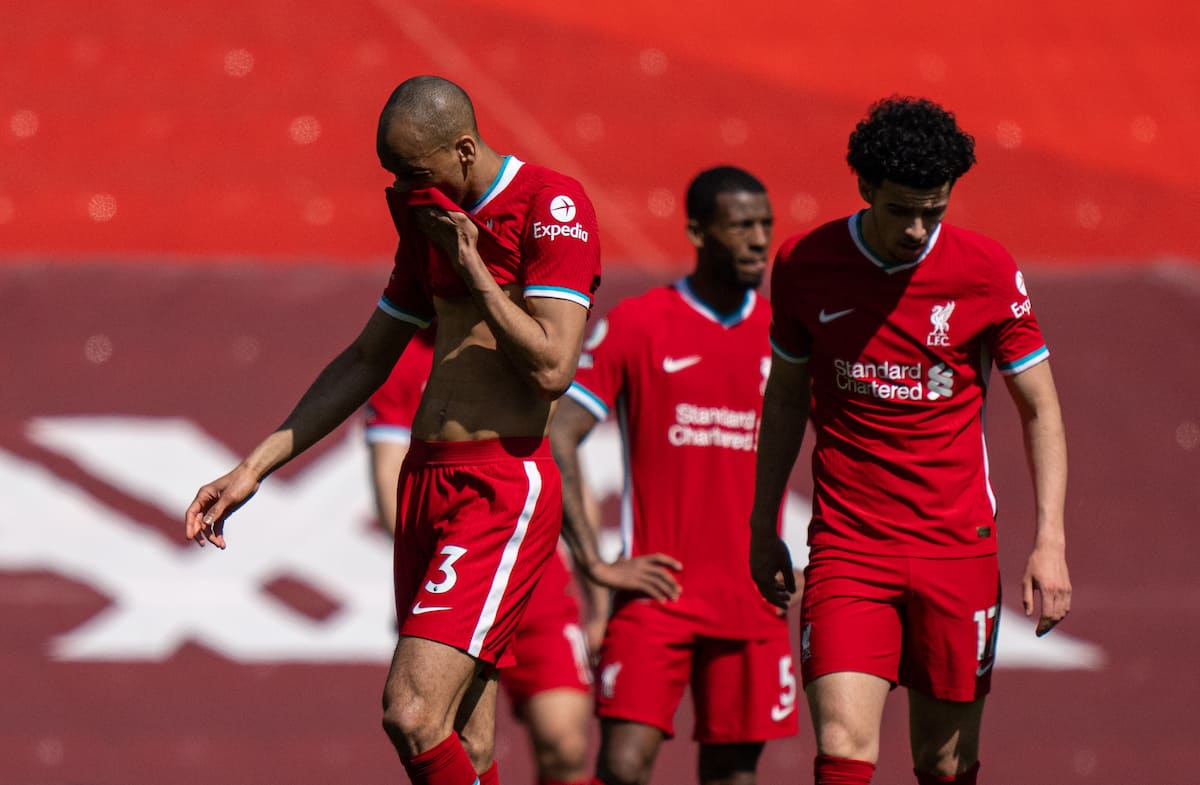 Liverpool let themselves down massively as wasted chances were again punished as a late goal earned Newcastle a 1-1 draw against the hapless hosts at Anfield.

Forced to play sweeper-keeper as Liverpool’s defence was cut apart too frequently, Alisson coped well in terms of shot-stopping and mopping up dangerous moves.

The No. 1 made a big save to deny Sean Longstaff in the first half, and was quick off his line to thwart Joelinton in the second, while his use of the ball was assured and, for the most part, clinical.

Let down by his team-mates for the two late goals – the first thankfully ruled out, the second a deserved equaliser for Newcastle.

The weakest of the back four, Alexander-Arnold looked shaken by the dynamism of Allan Saint-Maximin, dropping deep and forcing a disjointed defensive line.

Further forward he was more useful, and almost netted a stunning strike having been teed up by Thiago on the edge of the box.

Kabak was heavily involved throughout a frenetic first half, and held firm as the covering centre-back, compounded by an early yellow card that forced him to be more careful.

Liverpool were all over the place after the break, but the Turk was still largely strong alongside Fabinho, with Jurgen Klopp surely considering him as a long-term option beyond this season. 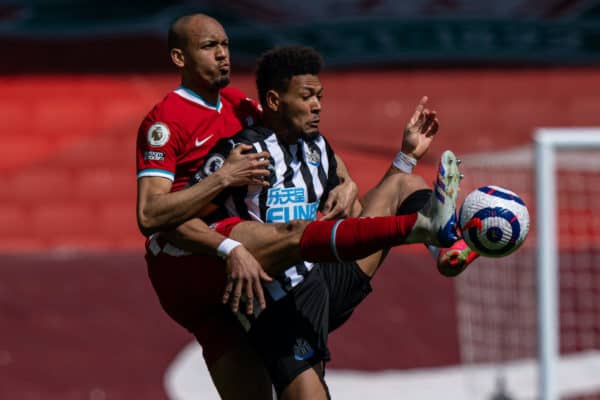 It is a shame to see Fabinho needed back in defence but encouraging that Liverpool have such a reliable option in reserve, rather than gambling with Rhys Williams or Ben Davies.

Made a big challenge at the end, taking a yellow card for a professional foul to deny Saint-Maximin on the break, but it mattered little as Newcastle eventually got their goal.

A driving force at left-back, Robertson was up and down the pitch throughout, aided by Steve Bruce’s persistence with a three-man defence and out-of-position wing-back Jacob Murphy.

The Scot almost grabbed the second goal of the game as he surged forward and powered a left-footed effort just wide, which would have capped an accomplished display. 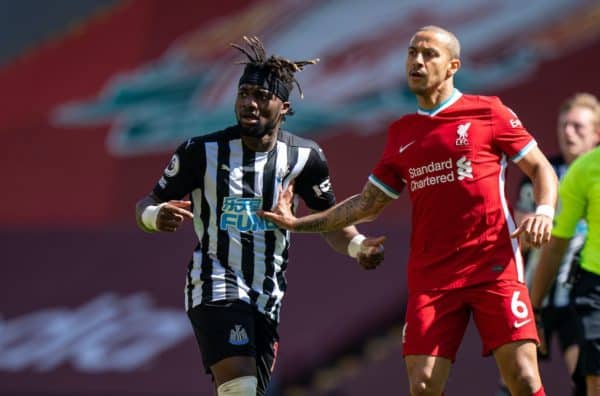 Thiago had the freedom of Anfield in possession, and it allowed him to be more positive in his use of the ball, keeping his head up and seeking out the likes of Diogo Jota and Roberto Firmino.

It is difficult to shake the feeling that his passes are at times too good and still not quite in sync with his team-mates, while at others they are simply overhit and sloppy.

The Dutchman had a different job to perform in terms of the structure of Liverpool’s midfield, and he did relatively well despite the game being too open for the majority.

He then dropped deeper upon the introduction of James Milner and the problems began, though through little fault of his own – Wijnaldum just isn’t a reliable No. 6. 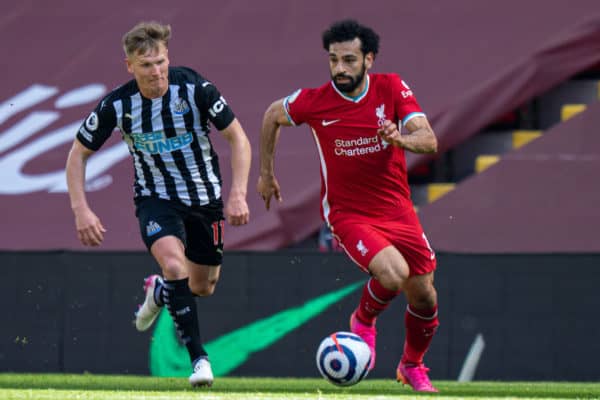 What a goal. Stunning stuff from the Egyptian King to touch, turn and finish in the third minute. The first Liverpool player to score 20 or more Premier League goals in three seasons.

He struggled to build on his opener, however, as chances went begging for Liverpool’s forwards, but he was again the standout in the final third.

The odd one out alongside Salah, Sadio Mane and Diogo Jota, Firmino was the creative hub in front of Thiago and Wijnaldum, and there were plenty of positives about his performance.

His interplay was smart and slick, with a neat touch and clever passing allowing him to craft openings for his more front-footed peers in attack, while he looked to test Martin Dubravka whenever possible, too.

Poor Sadio. He toiled away as part of the forward line but despite his drought-breaking goal against Leeds there is clearly still a mental block for the No. 10 around the penalty area.

Mane wasted a huge chance when put through by Salah in the first half, but at least continued to threw himself into opportunities as he looks to work his way out of a funk.

Jota had a disappointing game. His touch was sloppy, his passes overhit, his duels misjudged and his chances – of which there were plenty – wasted.

It was a big chance for the Portuguese as part of a four-man attack and it was squandered, with Klopp hooking him for James Milner before the hour. 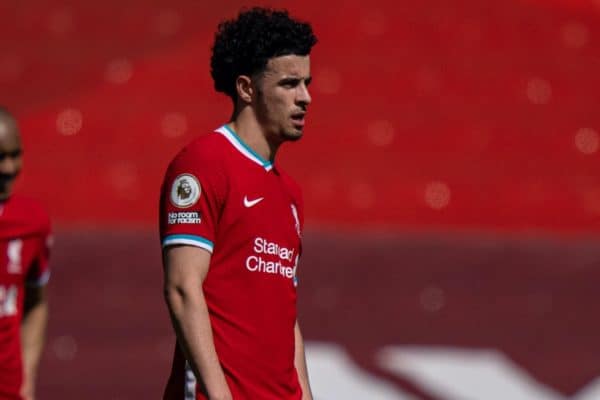 The renaissance continues for Milner as a regular option, and he gave Liverpool more fluency after replacing the wayward Jota, but a change of makeup in midfield undoubtedly played a part in the collapse.

Back in the fold after eight games unused or injured, Jones worked hard in a wild end to the game.

Klopp arguably made the right call in starting all four of his forwards given how many chances were created, and he could not legislate for the horrendous finishing on display at Anfield.

He was proactive in bringing Jota off for Milner, with it unlikely the 24-year-old starts against Man United next time out.

But the next sub, talking off Thiago was extremely questionable. “We had to keep the ball,” said Klopp post-match. Yet he took off the man who was keeping the ball in midfield.

An inquest will be held at Kirkby after a shocking defensive display in the final 10 minutes in particular, but Klopp needs to look at his own decisions too.

Could he have addressed it with the introduction of another centre-back, with Williams waiting in the wings? Perhaps, but he really should not have needed to.