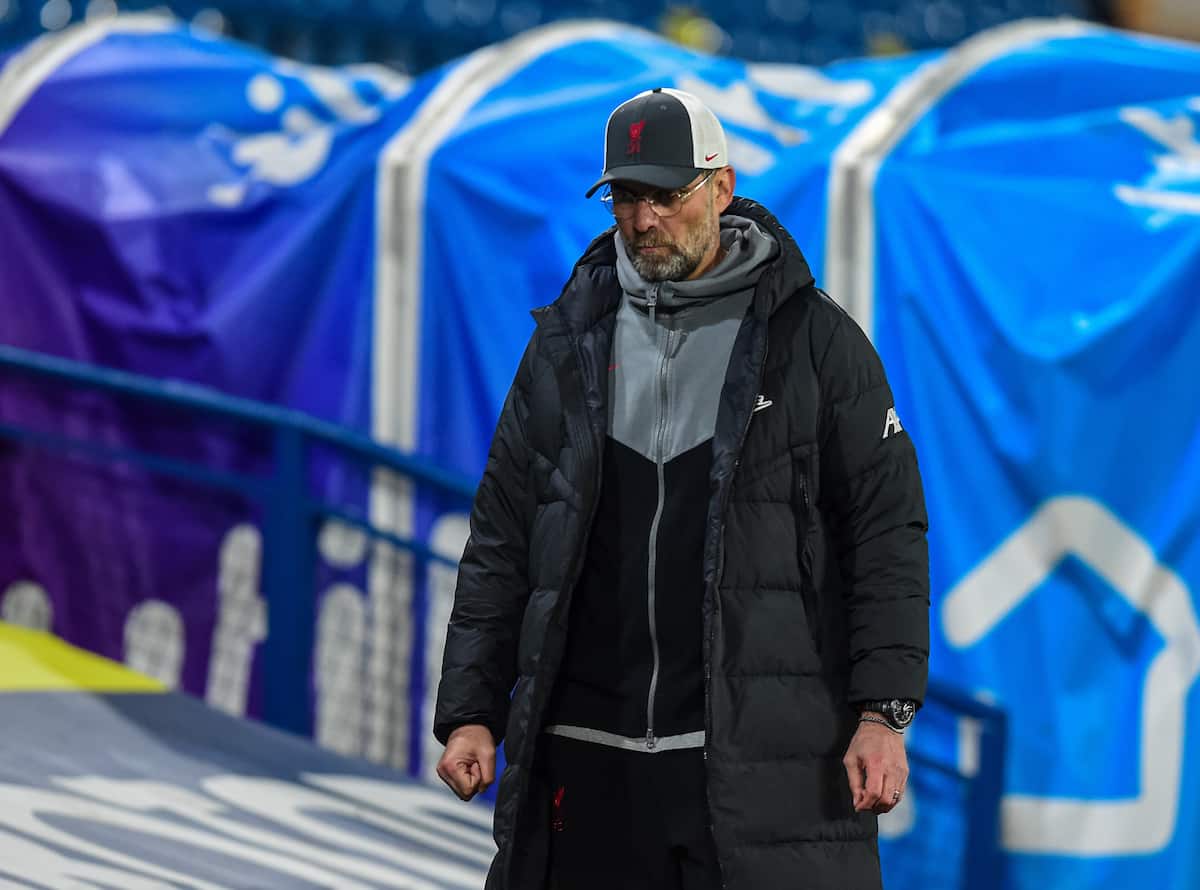 Liverpool were held to a 1-1 draw at Leeds that would have been seen as damaging in the race for a top-four finish, but the shadow of the Super League renders it moot.

The Reds arrived in Yorkshire against the backdrop of football ripping apart at its seams and while its significance is not yet known, Liverpool were held to a draw against a team not deemed worthy of a place in the breakaway competition.

In the race for top-four, it was a missed opportunity after West Ham‘s slip-up over the weekend, but the jeopardy does not exist if the Super League comes to fruition next season.

It leaves the question of does it even matter?

Sadio Mane broke his duck after nine league games without a goal before Fernando Llorente struck late in the piece, but again, does any of it matter?

That’s what it has come to and fans were all making the same point after the game across social media.

Does it even matter.

That was a weird feeling watching that

With relegation(likely), and the title done, the battle for top four in the Premier League was the only interesting race left, and now it’s all likely moot.

As if lockdown wasn’t bad enough; we have 6/7 dead rubbers left to “look forward to.”

Okay so horrendous 2nd half, Leeds deserved that goal and point in the end.

Does the top 4 matter now anyway?! If we're banned from the CL – none of it matters anymore ????

Whatever results don't matter we're in the Super League baby woo (but hey maybe they could've told the players I mean turns out there was no reason the likes of Hendo and Matip played through injuries and did themselves potentially long-term damage when the games didn't matter).

Good game that. If only there was a competition where history, local rivalry and the unique character of a nation's club football could make 6th v 10th so entertaining. Would be worth protecting.

‘Up the Reds but not the club’

Well that felt flat as fuck to watch – through no fault of the players. Feel sorry for them and Klopp.

Felt flat watching that, but mainly just feel for Jurgen and the lads, thrown under the bus and placed in an impossible position tonight. I still love this team and the boss, and I need to find a way to turn despair into anger because we cannot let them destroy our club and game

Really proud of the effort the players put in despite the fact that it all feels a bit meaningless.

I’m not in a great place due to largely unrelated things, but also because of all this — and as such, loads of love and solidarity to all fans who feel a bit sick and lost today.

Lucky to get a point but wasted opportunities too. Might never play Leeds again. Pretty standard day.

Up the Reds but not the club.