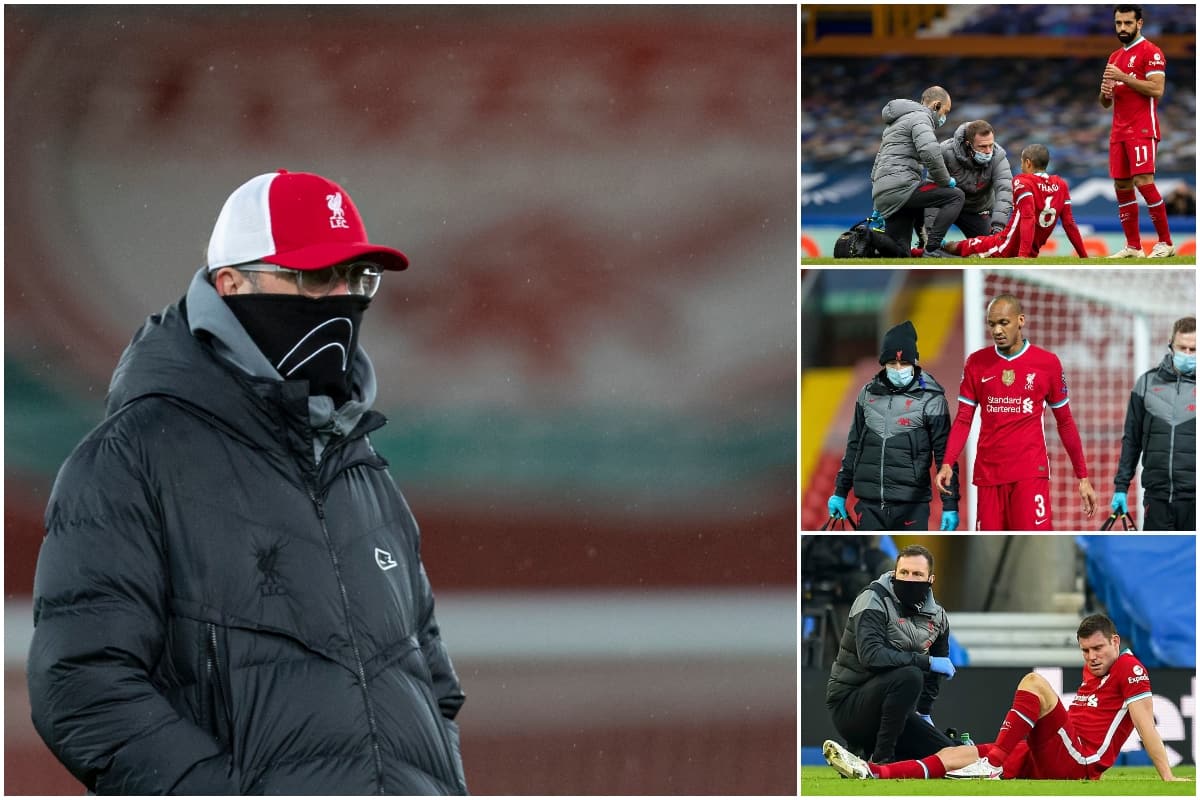 This season amidst the pandemic has created a perfect storm of injuries and issues for Liverpool FC. Dr Rajpal Brar looks at the causes and whether it could have been avoided?

To understand just how bad this season is in terms of games lost, here’s what the year-over-year injury data for the club looks like during Jurgen Klopp’s tenure (data provided by Ben Dinnery and Premier Injuries):

Here’s that data normalised on a per-game basis:

This season’s normalised injury data is by far the highest and nearly double last year! The question becomes: What’s the root cause of the injury crisis?

There are multiple factors that can help explain this uptick in injuries.

First and foremost, fixtures have come thick and fast during Project Restart and into a compressed 2020/21 Premier League season where the club is essentially playing every third day – whether that’s league games, domestic tournaments, or European tournaments.

That congestion creates fatigue which we know is a significant risk factor for increased injuries – especially soft tissue such as muscular, ligamentous, or bone injuries.

Further, that fatigue can lead to impaired decision-making on the pitch and create high-risk situations, whether it’s going in for a risky challenge or not being able to avoid certain challenges due to delayed reaction speeds. Mental fog and burnout, in addition to physical, has to be taken into account.

That mental and physical fatigue is further exacerbated by a very short off-season and turnaround time from the restart to this season. There’s was very little time – if any – for players to ramp down, decompress and recover.

Since Klopp took over, the club have been involved in and competed deep into multiple tournaments, including reaching the Europa League final in his inaugural season, two Champions League finals, and after his initial year, competing for a top-four spot in the Premier League each year.

These longer seasons of course lead to higher minutes played but the higher intensity nature of these matches create additional fatigue especially over the course of multiple seasons.

Since the 2017/18 season when Klopp’s vision for the Liverpool squad came together with his choice of personnel, there’s been a heavy load on certain players in key positions. Examples include each attacker in the front-three trident (Salah, Firmino, Sane), the pivotal full-backs in Andy Robertson and Trent Alexander-Arnold, and, up until his, injury Virgil van Dijk.

That consistency in play and intensity can actually be a positive thing in building fitness but it can create a more delicate situation where you’re walking a fine tightrope of risk/reward with player health and fitness, whether it’s due to fatigue or simply due to more chances of taking contact.

The Liverpool squad consists of multiple players who also participate on their national teams – many of whom are key players for their respective countries – and the club’s recent spell of success and raised profile naturally leads to more exposure for players and call-ups as well.

The end result is – you guessed it – additional minutes played at higher intensities.

When Klopp took over the managerial reigns, he gradually implemented and shifted towards an organised but frenetic high press system that requires significant physical and mental exertion and concentration from the players.

He has shifted away from that system in recent times but that initial transition to a higher intensity system and execution of it for multiple seasons can leave a residual impact on players.

Training for high-level athletes is a meticulous and organised process, with the Liverpool fitness staff creating specific programs and periodisations for each player and phase of the season, with each tile interlinked to create the overall strength and conditioning mosaic.

The COVID-19 shutdown obliterated that mosaic.

Although the team did its best to anticipate fitness needs – going as far as delivering fitness equipment to each player and doing fitness sessions virtually – it’s still not nearly the same as being in the facility, in training, and of course in matches. The shutdown created a significant dent.

Overall, the club has done quite well in managing the pandemic and that’s reflected in their small amount of confirmed COVID-19 cases (data again from Ben Dinnery and Premier Injuries):

However, we do know that COVID-19 can have significant effects on fitness – especially cardiovascular – which then increases injury risk when the player returns or perhaps lengthens their time off the pitch when dealing with another injury – possibly with Thiago – because now you have to rectify a double-hit on fitness from COVID-19 and the injury.

Whenever a team goes through injury woes, you’re nearly assured to hear an uproar or questions regarding that team’s medical or training staff. In this case, the team had multiple changes to their backroom staff including the departure of head of medical services Andy Massey who left to become the medical director for FIFA and physio Richie Partridge who left to be a part of the Qatari FA in preparation for the 2022 World Cup.

Partridge was replaced by new head of physio Chris Morgan – who left his station as head Arsenal physio to return to Merseyside where he previously had a stint of 10 years, working his way up from the academy to the senior side before leaving to the FA and Crystal Palace – and Massey was replaced internally by promoting Academy medical director Jim Moxon who impressed with his efforts coordinating the club’s response to the pandemic.

Without any information or specifics on new or changed injury protocols, it’s impossible to make any sort of measured or fair assessment. However, there may have been relative continuity from internally promoting a medical director and no significant changes to the club’s sports performance staff.

Rather than deal with unknowns and an absence of information, it serves our understanding much better to focus on the previous seven reasons rather than scapegoating.

We’ll never concretely know the root cause of the club’s injury issues this season but this litany of factors and unprecedented circumstances may provide some context for the slew of injuries this season.

When a team is playing and competing for multiple trophies over an extended period of time – fitness and health often can hang on a knife’s edge and just a few disruptors can throw a team into a full health crisis, let alone all the disruption the COVID-19 pandemic has caused.

Another team with a similar injury crisis is Real Madrid who – not coincidentally – have also been involved in long, hard seasons for an extended amount of time and therefore share many of these same factors.

Considering the Euros and Copa America this summer – more matches at high intensity – along with another truncated off-season heading into the 2021/22 season, I don’t anticipate injury risk normalising until after the summer of 2022 when players finally have a chance to actually downshift, have a proper rest and recovery, and then rebuild their fitness levels.

Until then, players, coaches, and medical/training staffs will have to hold on and make do best they can.