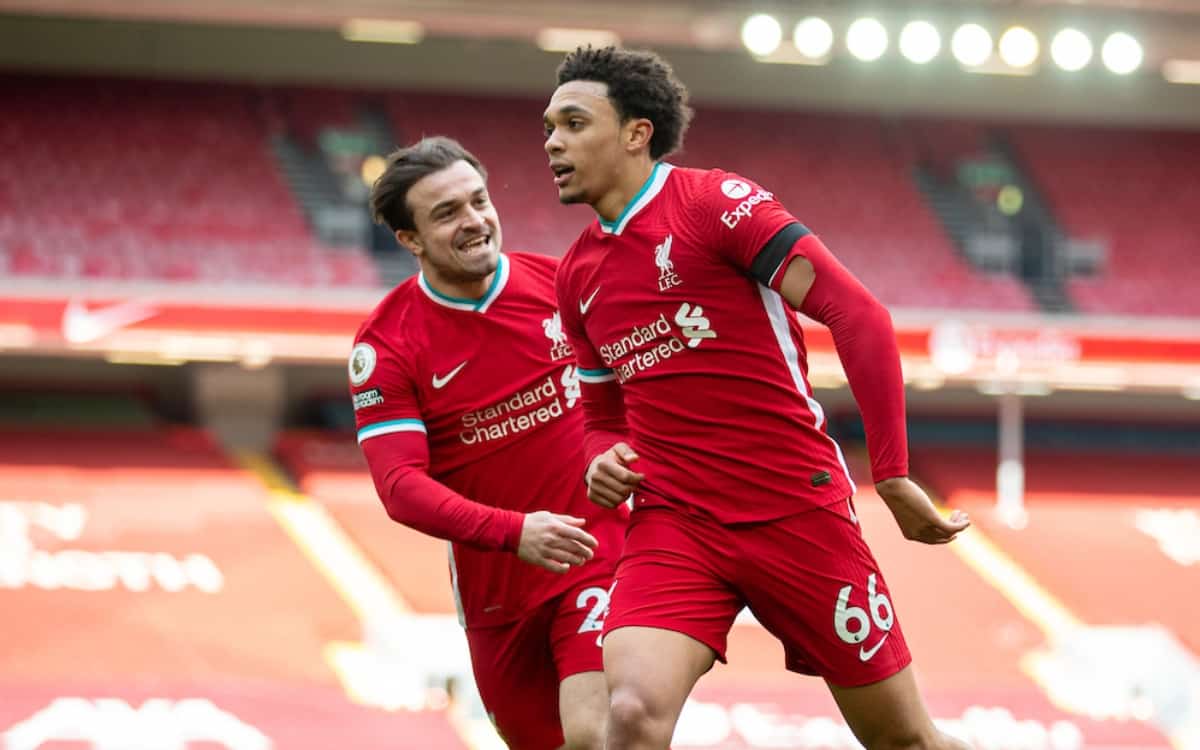 It was a day to applaud character and a fighting spirit for Liverpool as they came back from a goal behind to end their long-awaited run for an Anfield win, with Aston Villa the ones to taste defeat.

Much of the pre-match discussion centred around the Reds’ inability to find the winning formula on home soil after their solid foundations cracked at their feet to lead to eight games without victory.

And it appeared as though the story was to repeat itself when they failed to make their dominance count on the scoreboard, with Ollie Watkins pouncing on Liverpool’s soft underbelly.

Add to that a Roberto Firmino goal ruled offside by the narrowest of margins on VAR review and it felt as though we were reading off the script.

But then came Mohamed Salah’s header at the back post to level the scores and just when you thought they would be shaking hands with a point each, Trent Alexander-Arnold popped up with a thunderous strike.

The scoreboard read 2-1. Liverpool were the keepers of all three points at home for the first time since mid-December, 115 days previous.

It personified the Liverpool of old, the one who didn’t settle for less than three points while there was still time on the clock and it was the ideal change after weeks of mental fragility in the eyes of Salah when talking to Sky Sports:

“Finally! It was a great game, tough game but we won the game and that was the most important thing.

“We have lost a couple of games here and mentally it was like ‘oh no, not again’ but we did a good job second-half.

“It’s hard not to win at Anfield for a couple of games, we also missed a couple of chances in the first half and we were thinking ‘not again’ but the second half we managed to play good.”

It was a sentiment echoed by the captain on the day, James Milner who acknowledged to the BBC that it wasn’t Liverpool’s best performance, but that they found a way to grind it out was pleasing:

“I think many things but it was important to win, it was an important performance- it wasn’t our best by any means. The decision seemed to go against us but that’s the way it is. We have to stick it out and find a way.

“It’s nice to be in and around the Champions League spots but the most important thing is we concentrate on ourselves and try and get back to that consistent level. We need to take it in and keep improving and keep moving forward as a team.”

The victory was duly celebrated by the Reds across social media, with the manner of the victory welcomed by all after a turbulent few months.

And Andy Robertson, Ozan Kabak and Roberto Firmino all credited the teams’ mentality to “never give up” as three more important points were added to the tally in the race for top-four:

For Nat Phillips, who played his fourth consecutive Premier League game for the first time in his career, it was a comeback triumph defined by “character and determination”:

The team captains in Gini Wijnaldum and James Milner, meanwhile, could not look beyond the “important” nature of the three points and how the “scouser in the team” hit truly:

And lastly, Trent need only ask, “Are you not entertained?”:

The obvious answer to that question is yes. The win came as a relief after a long sting without one at Anfield and the manner of it was a welcome throwback to season’s prior.

Having the weight of Anfield off their shoulders could prove crucial ahead of Real Madrid’s visit on Wednesday, where Liverpool need to overturn a 3-1 deficit.

And fans or no fans, you can never truly write off Jurgen Klopp‘s men.