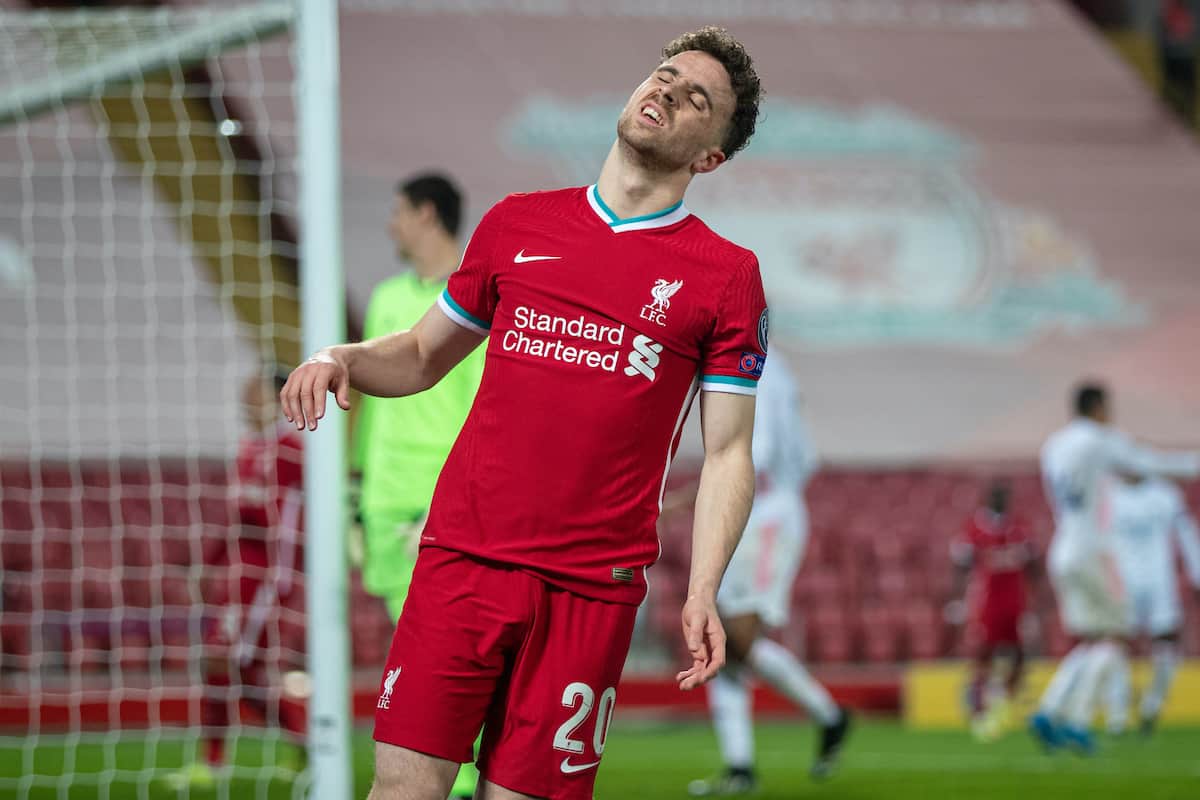 Liverpool’s Champions League campaign is over despite a rousing second-leg showing against Real Madrid, a 0-0 draw sending the Reds out on aggregate.

There were questions pre-game over what the best midfield arrangement would be: a two-man pivot with more attackers on the pitch? Gini and Thiago as the 8s or a complete change of approach from Klopp?

Ultimately it was the ‘steady’ option the boss opted for, the mix of players which can keep the passes simple and reliable, but also offer the off-the-ball defensive work and covering in the channels which could guard against Real’s counter-attacking threat.

James Milner starting might not excite the masses, but he was clearly picked as part enforcer, part recovery runner – while Gini barely misses a minute anyway.

Thiago was the first option off the bench, as a result, but it perhaps would have been more ideal to see him on when Real were behind and being pinned back – as they should have been.

It was a plan which largely went well in that first half, a mixture of aggression and supporting passes forward, but of course that left the reliance of actually scoring on the attacking trio.

That shouldn’t have been an issue, given the chances presented to them. 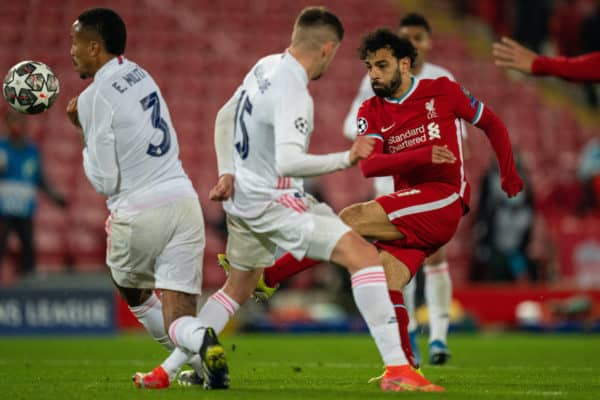 Confidence-boosting, for sure, but not deficit-reducing in the end.

Jurgen’s half-time team talk would have been supremely easy: keep doing everything the same, but find that finishing touch.

Minutes after the restart though it was a case of same old story: Firmino had one reasonable and one excellent chance. Courtois came to the rescue on the latter.

Salah missed two more openings, Jota off the bench rifled one into the side netting.

Liverpool had their chances, boy did they have their chances. At the weekend the long overdue home win arrived, but with it came the stat of less than one in a hundred shots finding the back of the net.

It was always a stretch to think we’d be able to fashion 200 against Los Blancos, even if the crowd had have been in place.

The Champions League campaign is over, but the season as a whole isn’t – but results at home simply had to improve.

That win over Aston Villa, plus a largely dominant and improved performance here, certainly suggests that Liverpool have put any questions of a home-ground hoodoo behind them.

Scoring remains an issue, yes, but we won’t play Real Madrid and Thibaut Courtois every week.

There was enough intensity in the game, clever passing in the final third and bodies getting into the box to take shots to suggest that future games can be won, perhaps enough to claw back ground on the teams above in the league.

Being out of Europe is bad enough, so let’s not focus on those who didn’t hit top gear.

Alisson had precisely one thing to do all game and it was perfectly done: stopping Vinicius Jr’s attempted flick over him and smothering Benzema on the rebound. This was more like the sharp, authoritative Ali we know and need.

The full-backs both more than played their part, the regular outlet and creative force again, perhaps not inch-perfect with every ball but relentless, hard-working, tracking back their men and looking for cut-backs when possible.

Fabinho barely missed a trick and not much more needs to be said about him.

And in the first half, Firmino and Mane were very good for the most part, dangerous and creating openings – though both faded after the break.

Both need to rediscover their shooting boots, but there’s scope for optimism. 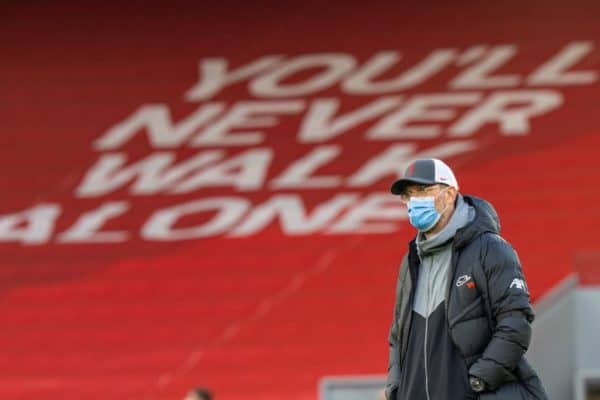 So the season boils down to something very simple: seven matches, two league positions and three points to make up.

We’ll need a near-perfect end to the season to do it, but this Liverpool side is capable of unbeaten streaks. Even in this dismal overall campaign, the Reds are now on a run which is five unbeaten in the last six.

Leeds and Newcastle must both be viewed as three-point fixtures, that much is clear.

Beyond that, we’ll see the lay of the land: all the top sides will still drop points between now and the end, and it isn’t as simple as a single day off costing a top-four finish.

But there’s little margin for error and above all else, that goalscoring, clinical, confident touch in the box must be found.

A little better in that regard this time around and the Reds would have been headline material once more.

Instead, it’s back to the training ground to recover, reconsider and recharge for one final push – which will be decisive for both this season and next.