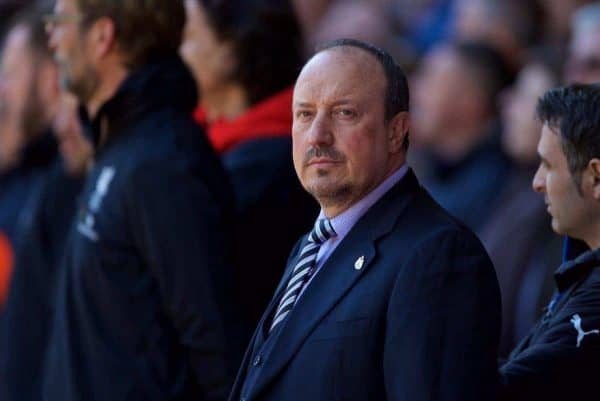 Rafa Benitez has detailed his tactical approach to taking on the current Real Madrid side, with his belief being that Liverpool can triumph if they thwart their midfield.

Benitez has experience on both sides of the tie, having led the Reds between 2004 and 2010 and managed Real from mid-2015 to 2016, but his allegiances lie firmly on Merseyside.

Currently out of work following his decision to leave Dalian Professional in the Chinese Super League, the Spaniard has kept his finger on the pulse of European football, as one of the most well-respected tactical minds in the sport.

In a column for the Times, Benitez looked ahead to the Champions League quarter-final in Madrid, and told the club he led to their fifth European Cup in 2005 that if they stop Luka Modric and Toni Kroos, they can stop Real.

“The key to the game will be the tempo at which it is played,” he explained.

“If Liverpool can operate with aggression in the middle of the pitch, they can make it very difficult for Real, who normally do not attack with the speed of Liverpool.”

He added: “Georginio Wijnaldum and Thiago Alcantara, more than Fabinho, are the ones who have to be on top of Kroos and Modric all the time.

“One of Liverpool’s weapons will be the intensity with which they play because if they allow their opponents time on the ball then they will be in trouble.”

Effectively, Benitez believes stopping the supply line to Karim Benzema is vital, and that if Liverpool’s midfielders are on their game, they can suffocate a Real side who will look to play.

In terms of their out-ball, Benitez details that “the space behind the full-backs is another area that Liverpool can look to exploit because we know they are so good on the counter-attack.”

Key to avoiding that for Real, he feels, will be Casemiro, as “how much work he can do, how many balls he can recover, will be vital.”

“Balance is always the key to success and that is why Casemiro is so important,” he continued.

Fundamentally, Benitez concluded: “It is crucial for Liverpool that they score.

“If they do this, then Real have to attack in the second game at Anfield and they will then be more exposed in defence.

‘We knew the next game at Anfield would be important with the supporters and we pressed them from the first minute and scored early before winning 4-0. The absence of fans would help Real this time.”