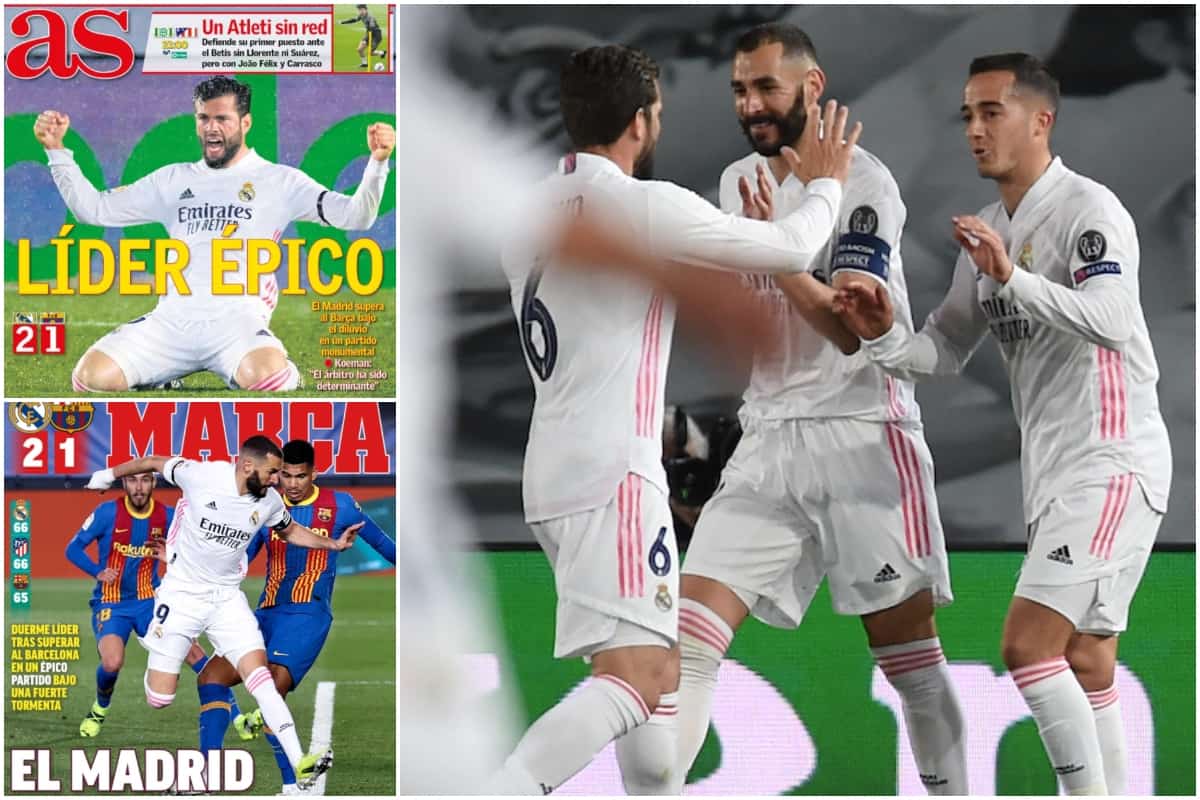 Real Madrid hung on to clinch a 2-1 victory in El Clasico on Saturday evening, a result which moved them to the summit of LaLiga, at least temporarily, ahead of their trip to Anfield.

Zinedine Zidane’s side had started the day in third place, behind Barcelona, and on a rain-sodden pitch in Madrid, they would leapfrog their rivals.

If Atletico Madrid overcomes Betis on Sunday their time at the top will be limited, but that they are back in the discussion will be the story after having previously been written off.

Real made just one change from their win over Liverpool, with Federico Valverde taking the place of Marco Asensio – a move akin to that of Jurgen Klopp after he made just two in the win over Aston Villa.

However, the withdrawal of Toni Kroos, Karim Benzema and Vinicius Jr at the 72nd-minute mark signalled Zidane’s intentions ahead of Wednesday’s trip to Merseyside.

And their defence took another hit as they will be without Lucas Vazquez for the remainder of the season after he was withdrawn on the cusp of half-time with a knee injury sustained in a challenge with Sergio Busquets.

By that time, Real Madrid had already amassed a two-goal lead thanks to a smart backheeled strike from Benzema and a deflected free-kick from Kroos on the edge of the area – both came within the first 28 minutes.

While Barcelona dominated possession (69 percent), Real were content to strike on the counter and prey on their vulnerability in what was a wild, high tempo clash for the entire 90 minutes.

Ronald Koeman’s side had their fair share of chances and found the woodwork, and their breakthrough came on the hour mark as Oscar Mingueze finished off Alba’s cross in the driving rain.

A frenetic finish would follow, with Barcelona denied a penalty after Ferland Mendy challenged Martin Braithwaite before Casemiro was shown a red card after his second booking and Ilaix Moriba hit the crossbar to deny the Catalan giants a share in the spoils.

The result means Real have won 15 of their last 20 games in all competitions, but post-match Zidane conceded his side have hit their physical limit.

“We will rest tomorrow as it has been two hard-fought games,” he said, via Football Espana. “I don’t know how we are going to end the season, because we are physically at the limit.”

Real, like Liverpool, will have had four days to prepare for their second leg Champions League quarter-final tie, where Klopp’s men have to overcome a 3-1 deficit to progress to the final four.