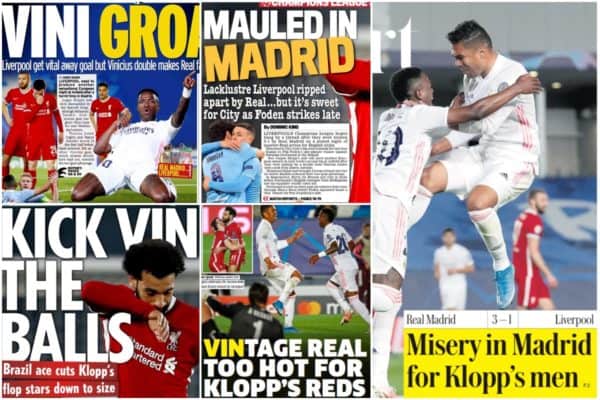 The media felt Jurgen Klopp had a night to forget in Liverpool’s 3-1 first leg loss to Real Madrid, and assessed the performance as a big step back after recent progress.

The Reds have a mountain to climb at Anfield next week after an error-strewn performance was punished by Zinedine Zidane’s side.

Vinicius Junior’s brace and Marco Asensio’s strike put the Spanish side in firm control of the tie, but Mohamed Salah’s effort at least provides a ray of hope for the second leg.

It was a poor display from Liverpool, with too many key men off the pace, and a vastly improved display will be required to overturn the result from here.

Here’s all the key analysis from the media on the deflating defeat in Madrid.

Leading that assessment was BBC Sport’s Phil Dawkes, who felt the Reds were simply “outclassed” by the 13-time winners:

“At the weekend, Liverpool ripped Arsenal apart, winning 3-0 in a display that some felt represented the turning of a corner for a side that have fallen well short of the standards they set during last season’s stellar title-winning campaign.

“If that was one step forward, this was two steps back, with the Reds largely outclassed by a notably superior opponent.”

“Liverpool lacked not only football basics but either discarded the central parts of their DNA ever since Klopp took over or felt utterly unable to play with the rock ‘n’ roll hunger and intensity that made them both famous and successful.

“Using the word ‘atrocious’ is strong. But it’s merited here not only by the normal Liverpool standards but by any basic football barometer.”

The Mail’s Dominic King assessed it was up there among Liverpool’s very worst European performances produced under Klopp:

“It was as bad a performance as Liverpool have produced in Europe on Klopp’s watch, lethargic and riddled with errors.”

The Telegraph’s Chris Bascombe thought Klopp’s team looked “a shadow” of the the side which had recently found form and bemoaned how the Reds were their own worst enemies:

“The game began akin to a surrender, Liverpool a shadow of the side which recently threatened a revival.

“As in the 2018 final, they were culpable for their downfall, defensive errors costing all three of Real’s goals.’

Writing for Goal, Neil Jones apportioned some blame to Klopp for his decision to throw Keita in on such a stage despite barely featuring:

“Klopp cut a frustrated figure on the sideline, but he too must take his share of the blame. If his players made mistakes, then so did he. His team selection gamble didn’t pay off.

“Naby Keita, a surprise starter in midfield, lasted just 42 minutes before being substituted, in what was a damning indictment of the manager’s gameplan. Keita, making only his ninth start of the season in all competitions and just his second in Europe, looked lost, a player short of rhythm, floundering the big stage.”

Bascombe suggested that Klopp underestimated and ‘disrespected’ Real Madrid by making such a change:

“In the build-up to the 2018 final, there was so much focus on the pain Liverpool’s strikeforce was going to inflict on a side apparently past its peak, few seemed to consider the possibility that the established superstars would put the novices in their place.

“There was a similar tone of disrespect to Zidane’s injury hit side pre-match here, if not within the Liverpool party, certainly among neutrals. Dare one say it even manifested itself in Klopp’s team selection?”

Meanwhile, King thinks Keita is running out of time to prove his worth at Anfield:

“After three years, we are still waiting for him to stamp his presence all over a game of this magnitude. Liverpool cannot afford to wait for him forever.”

Bascombe felt that Klopp badly lost the tactical battle as Zidane came up with the perfect tactical plan to exploit Liverpool’s big weaknesses:

“As in that Ukrainian final, Real were too savvy, too experienced, and too comfortable in their own skin to buy into the idea they were going to be dominated.

“Zidane is also more tactically astute than he is generally credited, identifying the way to expose Liverpool’s frailties was to pass long over their high backline. Both first half goals came from that source.”

The Guardian’s Sid Lowe explained how Klopp’s team played right into Real Madrid’s hands in allowing Kroos so much time on the ball to dictate the game:

“Where was the old swarming midfield cover? Gini Wijnaldum spent the first half chasing ghosts. Naby Keita was a star-struck tourist. When Liverpool play this way – like a bad Liverpool, Liverpool with the throttle closed – it is hard to think of a more perfect opponent for Kroos.

“But whatever the score at Anfield this was a chance missed, a high-class opponent given too much time and space, allowed to measure this game out in unhurried passes.”

The Mirror’s Andy Dunn had strong words for Trent’s performance and thinks the right-back played himself out of the Euros in Madrid:

“It was not just his latest assist – this time a thoroughly unwanted one for Marco Asensio – but it was the way he was exposed by, among others, Ferland Mendy. The Real Madrid left-back skipped around him as though he was bypassing a traffic cone early on.”

“Jota, chosen ahead of Roberto Firmino, did not match the Brazilian’s excellence at forcing opponents into the pressing trap, closing spaces, sniffing the opportunity to thieve possession.”

The Telegraph’s Mike McGrath thinks Trent’s error should see him taken out of defence and moved into midfield where his play-making capabilities could excel:

“As poor as his defending was, his attacking in the second half was sublime.

“Perhaps he needs to be in midfield, dictating the play rather than having one eye on the opposition forwards. Philipp Lahm did it later in his career when Pep Guardiola realised the football brain his left-back possessed. Most have seen by now that Alexander-Arnold can play in a more advanced position.”

The Mail’s Martin Samuel thinks this Madrid side boast too much winning experience in this competition in recent years to surrender the tie from this position:

“They put four past Barcelona two years ago, of course, but the recent records of the Spanish giants in Europe show a marked difference in temperament under pressure. Madrid have lifted four Champions League trophies in the time Barcelona have one.

“Given a two goal first-leg lead, and an empty Anfield, they have personnel who will not be fazed by mere circumstance.”

The Press Association’s Carl Markham sees a comeback as unlikely given there will be no Anfield crowd to make the difference:

“With no fans inside Anfield to produce that special European atmosphere and a team performing at a significantly lower level than in 2019, even an away goal given to them by Mohamed Salah’s 26th in 44 Champions League matches may not be of much help.”