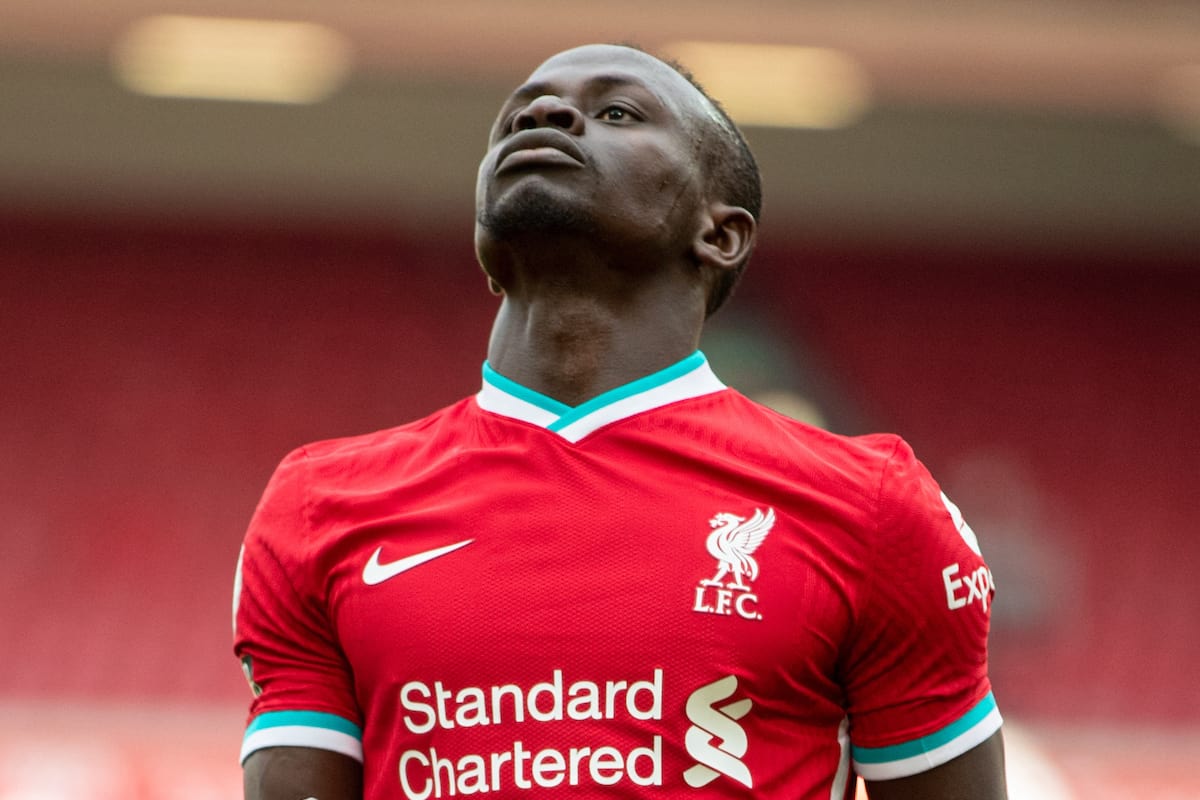 Sadio Mane is undoubtedly enduring a slump in form up front for Liverpool, and the numbers show that fatigue is finally catching up with a No. 10 in need of a break.

In the final seconds of Liverpool’s much-needed 2-1 against Aston Villa, Sadio Mane was presented with a golden opportunity to make it 3-1.

It was one of three big chances Liverpool had in the game, the others being Mohamed Salah’s goal and the chance the Egyptian missed in the first half.

Mane had a number of options once through on goal in those final moments. Pass to Salah, pass to Diogo Jota (which seemed like the best choice) or try any number of finishes.

In the end, he went with the option requiring the least thought – perhaps the most tired option despite him being fresh off the bench. He opted for power across the goalkeeper giving Emi Martinez the type of shot a goalkeeping coach might serve up for him in training. 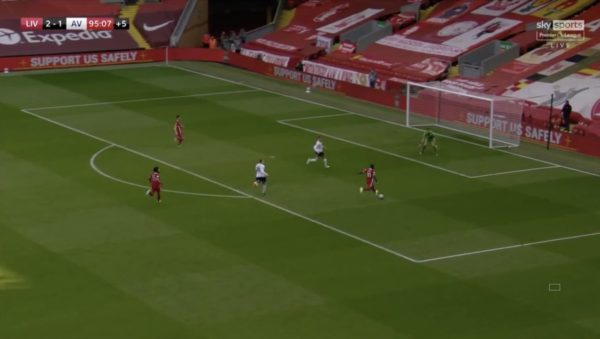 It summed up many of Mane’s recent performances. The Senegalese has gone from a standout player in a team of stars to a misfiring star in a struggling team.

This also shows that it’s not just Mane who has performed below his usual level this season, but given his more sustained quality in recent seasons and the high levels of performance we are used to from him, his dip in form is one of the steepest.

There is a measure of expected goals (xG) that subtracts xG from the actual number of goals a player has scored.

A high number in this metric can demonstrate that a player is high on confidence, is finishing more chances than the xG metric expects them to and is generally performing well in front of goal.

It’s not too difficult to guess which player is at the top of Liverpool’s charts for this at the moment. 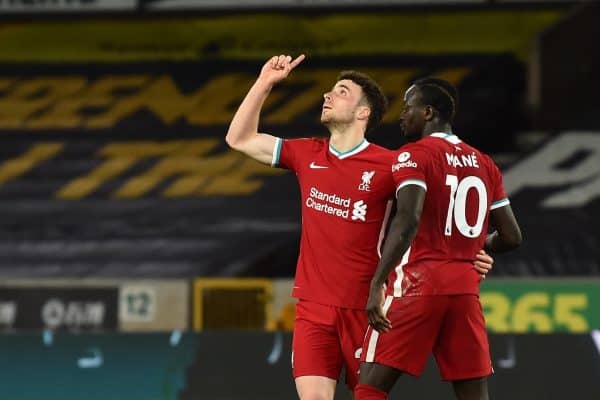 Jota has a goals-xG of 4.1. Only Son Heung-min and James Maddison rank higher in the Premier League.

Second in the Liverpool squad for this is Salah with 2.6, or 1.1 if penalties aren’t included.

Just as it’s fairly easy to predict Jota as the best player for a metric that can be seen as a judge of finishing quality, the names which come to mind when thinking of who might be at the opposite end of the scale for Liverpool are Mane and Roberto Firmino – and this too would be correct.

Mane sits at the bottom of the list with -5.2, with Firmino on -4.8. Mane’s shot against Villa is a good example of this in action – a high-quality chance that doesn’t result in a goal.

We may not need xG to tell us all this and come to this assessment of Mane’s play, but sometimes it’s useful as a reference to back up what we are seeing on the pitch. 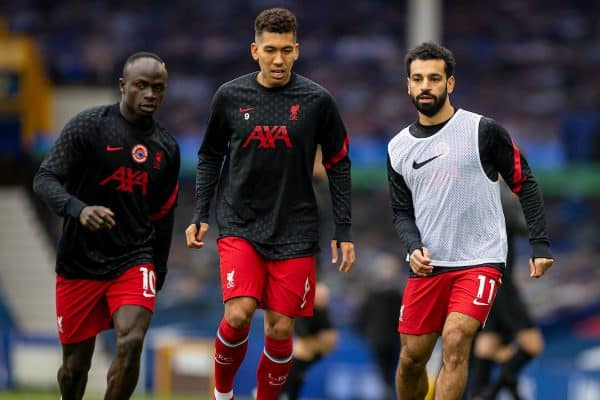 Another thing that seems obvious to the naked eye is that fatigue may be setting in for a number of Liverpool players who have played non-stop football for a number of years.

That’s especially the case for Mane, who played at the World Cup in 2018 before playing a key part for the Senegal team that reached the final of the Africa Cup of Nations in the summer of 2019.

Around all of this Liverpool have reached the final of the Champions League twice and have been involved in two relentless charges for the title, producing two of the best seasons in the club’s history.

Following on from the 2018/19 campaign in which Mane played the most minutes in his career to date, reaching the AFCON final in the summer meant his season didn’t finish until July 19.

He was back in training at Liverpool by August 5 – just a 16-day break – and gave him a pre-season of just 10 days.

“Sadio had 16 days off, he will be in a good shape,” Klopp said at the time. “He doesn’t drink, he doesn’t eat too much, he had a training programme.”

Then the break in activity in 2020 for COVID-19 was not the kind of break a footballer – or anyone – needed.

On top of this Mane tested positive for the virus in October 2020, putting him out of action for 14 days which, again, cannot be seen as any sort of rest.

Fatigue can often affect decision-making first and physical performance second. Mane continues to put in a shift in each game but is less effective.

There appears to be less purpose in his running on and off the ball. It seems like there is more running to recover than there is proactive running to press – even though, this being a Klopp team, there are always some instances of the latter.

The numbers show a dropoff in Mane’s pressing in defensive and midfield areas compared to recent seasons, as seen in the graph below using data from FBref. 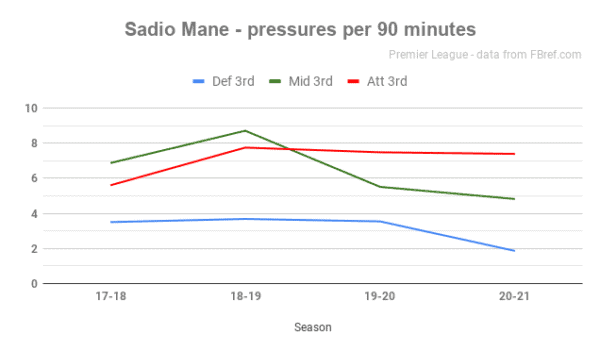 This matches up with a team-wide drop in pressures applied to the opposition per 90 minutes compared to last season. Defensive third pressures are down from 39.4 to 31.7, middle third from 61.7 to 56.7 and attacking third from 47.3 to 42.3 in the Premier League.

So this isn’t just an issue with Mane, and to his credit, he has maintained his high pressing levels in the final third, where he is sixth in the league for total pressures.

Using the limited data available publicly he’s also not dropped when it comes to the distances he runs in a game. According to this data from Sky Sports, he was averaging 10.1km per 90 in the Premier League last season.

Using data available via UEFA from Champions League games this season, he’s running 10.6km per 90, but though his pressing numbers in this competition are higher than in the Premier League they are still down on last season, as shown below. 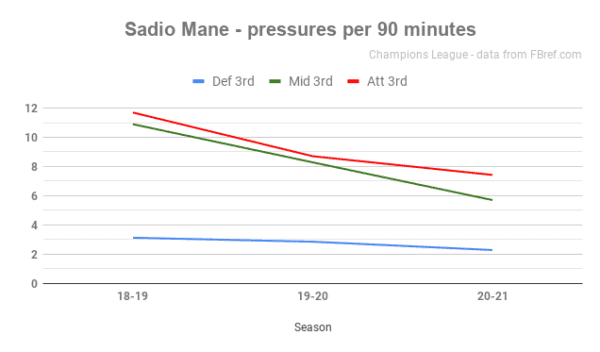 There’s always a chance that Mane could be being asked by his coaches to do less pressing in deeper areas, but this doesn’t seem to be affecting the distances he is running

Looking at Mane’s output in both attack and defence, it’s not the volume nor the effort that’s an issue, it’s where this is being directed and the quality of end product – as suggested in the AIUnderPressure tweet below:

One of the biggest stories is that Jota playing the centre forward role did not press Kroos once during the entire match. In fact neither Jota or Mane pressed Kroos during the match. Jota and Mane pressed the same people in the same locations (Vasquez, Militao, Modric) pic.twitter.com/kuFUJz6bAC

This all points to a lack of sharpness due to fatigue.

It might be a relief for many players, or maybe more so for their clubs, that the Africa Cup of Nations originally scheduled for this summer has been postponed until January 2022.

This will be the first summer off for Mane, and many others not involved in the Euros, since 2017.

Mane has been a world-class player for Liverpool and could be again, but in a team that relies on being sharp and alert in and out of possession, the explanation for Mane’s drop in form could simply be that tirelessness has turned into tiredness.