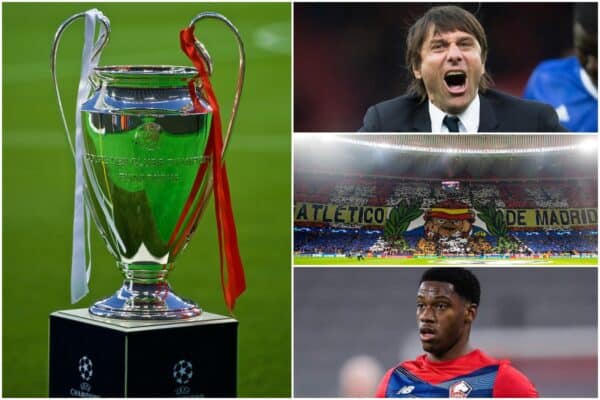 Liverpool made it into the 2021/22 Champions League thanks to a 10-game unbeaten run at the end of the Premier League season; around the continent plenty of other sides also left it late – and two league title winners were somewhat unexpected.

It seemed as though for a while the Reds, champions of everything only a year or so ago, would have to make do with a second-tier competition…or a third.

For a while, there was a debate over whether fans would prefer a streamlined Europa League or a new edition Europa Conference League – but thankfully there’s no need to decide.

Jurgen Klopp‘s team will be back among Europe’s elite next season, not as title-winners this time but perhaps with a new aura of strength around them after overcoming absurd levels of adversity to finish third.

Who will be joining us, and how did they get there? Read on and find out.

Round of applause, Luis Suarez. Binned off by Barca at the start of the campaign, our former forward rattled in 21 goals in LaLiga to fire Atletico Madrid to their first league title in seven years – including the decisive one to seal the win on the final day.

Our Champions League vanquishers of last season stumbled in Europe this time around, knocked out by Chelsea, but it left them free to power on and earn a long-awaited spot atop Spanish football’s ladder.

The second surprise winner was even more of a shock: Lille doing the business in Ligue 1 to beat PSG to the title.

It has been a very odd season: they almost lost their manager, Christophe Gaultier, who is now expected to head to Nice. The team could be broken up and sporting director Luis Campos is wanted by half of Europe.

Their starting XI cost around £66 million and yet they have beaten Mbappe, Neymar, Pochettino and the billions of barrels of oil to claim just their fourth league title in history.

Elsewhere, the names are less of a shock.

Bayern Munich eventually ran away with the Bundesliga title after it initially looked close-fought, while Inter Milan showed the consistency others lacked to win Serie A – their first in 11 years too, but they were miles better-organised and better-run than a start-of-a-rebuild Juventus.

Top teams from the top five

Presumably, you already noticed that Man United, Man City and Chelsea will join the Reds in the Champions League next term – unluckily for Brendan Rodgers and his Foxes.

Elsewhere, the big final-day drama saw Juventus edge out Napoli after the latter conceded 20 minutes from time to draw, while Lyon ‘did a Leicester‘ by losing when a win would have seen them overtake Monaco, who drew.

As a reminder, the champions of the top leagues are automatically top seeds next term.

Which faces are missing?

Napoli missed out, after last-day ineptitude went punished. Eintracht Frankfurt managed to throw away fourth place after one win in the last four, while Bayer Leverkusen are Europa-bound.

It appears Everton won’t be there either, after all.

Best of the rest to watch out for

As for the rest we could come up against, there are some familiar faces and some new names to enjoy if we get drawn alongside them.

Genk won once more in Belgium, while Galatasaray edged out Fenerbahce for a qualifier spot – though any happiness there was probably tempered by losing the title to Besiktas by virtue of a single away goal scored from the penalty spot on the head-to-head ruling: same points, h2h points, h2h goals scored and conceded. Madness.

Spartak Moscow, meanwhile, have a qualifier spot, and PSV and Porto are straight to the groups.

Who do you fancy, then?!