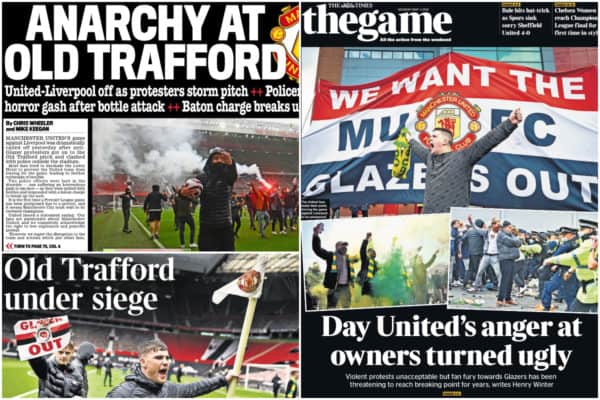 A “landmark moment in the game” – How the media saw protests at Man United vs. Liverpool

The violence of Man United supporters was condemned but Sunday’s protests have been described as a “landmark moment,” with a warning sent to Liverpool’s owners.

It became increasingly clear as the afternoon wore on that a vital Premier League game was not going to go ahead as planned at Old Trafford.

Both the Liverpool and United squads remained in their team hotels long past the intended kickoff time on Sunday as protesters broke barricades and made it onto the pitch in Manchester.

Organised to show patience had long gone with the United owners, scenes became violent as fans clashed with police, but there remained an overriding message that the time has come for the Glazer family.

There is no rescheduled date confirmed for the fixture as of yet, but as the media assessed the situation, it was largely deemed more important that the message was delivered.

Here’s how the papers saw the events at Old Trafford, and what comes next for clubs like United and Liverpool.

It is important to begin by condemning the violence that erupted…

Martin Samuel, writing for the Mail, criticised “those who betrayed the message” but insisted “there was nobility amidst the carnage”:

“Those who betrayed that message in favour of a bloody fight and some entry-level theft and vandalism must be disregarded and disowned. This was a bit more serious than getting your self-aggrandising selfie atop the goalposts, or having it away with the corner flag.

“This was not about throwing a bottle at a police horse. There was nobility amidst the carnage. This was, potentially, the start of something special. It may not change the ownership of football clubs, but it will, if successful, change the direction those clubs are travelling. And if it does, it changes the game too.

“Pulls it from the brink. Saves it from the moribund imaginations of the super-rich. Manchester United and Liverpool wanted Project Big Picture – and now they’ve got one.”

The Times‘ Henry Winter joined Samuel in a similar sentiment, first underlining his disapproval at the actions of a number of fans in a piece otherwise praising the initiative:

“The errant behaviour of some United fans outside the Lowry Hotel, where their team were staying before the scheduled match with Liverpool, and outside and inside Old Trafford, of course, needs the full response of the civil authorities.

“But let’s also understand the cause of yesterday’s events.

“Those of us regular attendees at Old Trafford, who were there, and have been chronicling the shameful story of the Glazers for 16 years, were able to peer through the smoke of the fans’ flares and fury, and see that the enemy within is not some trespassing fans but the odious owners bunkered up in Florida.”

But the United supporters’ cause was praised almost unanimously…

The Independent‘s Miguel Delaney agreed that violence was not the answer, but argued that these protests – an extension of the Super League opposition – could be a “landmark moment”:

“It is impossible to find fault with the legitimacy of these demonstrations, or their effect.

“These were almost unprecedented scenes. There has never been a game – let alone a game of this scale – postponed due to fan protest in the Premier League era.

“You might say it’s the second most effective moment of supporter activism in modern English football history, after the demise of The Super League.

“Really, of course, it is just a continuation of that same protest.

“It is why that plan may genuinely prove a landmark moment in the game, in a way that was totally unexpected, and that represents a classic case of unintended consequences.”

Andy Dunn of the Mirror noted how even the prospect of sanctions against the club they love was not enough to quell a movement that “came from the heart”:

“The club, which once had to postpone a game because a security firm had left a fake bomb in a toilet, knew these protests were going ahead yet still managed to allow hundreds of supporters inside the stadium.

“They are professionals only in the money-making league – it is amateur hour when it comes to everything else.

“If anyone is held accountable for this, it should be the people at the very top of Manchester United Football Club, not those who protested.

“And if you want to know how these protests came from the heart, then consider how these United fans thought their cause was more important than any negative consequences for the club.”

Football365‘s Matthew Stead described the affair as “a warning that everyone failed to heed”:

“‘We decide when you play’ read the message on a banner outside Manchester United’s Carrington training complex little over a week ago. Those words were not hollow. It was a warning that everyone failed to heed.

“Many expected some sort of demonstration to provide the pundits with a pre-match talking point or opening paragraph fodder for newspaper journalists across the country. None envisaged this becoming the entire story at the expense of the sport itself.

“But fans have been overlooked, taken for granted and treated like customers for too long. They have a collective voice and it is louder than any of us could have previously imagined.”

And for some it served as a warning of more to come, possibly for Liverpool’s owners…

While the Independent‘s Tony Evans believes the protests came “16 years too late,” he hopes it will be “the catalyst” for an uprising among fans:

“This should be the catalyst for a new phase of fan activism. The lesson of the Glazer takeover is that supporters allowed themselves to be silenced too easily.

“Owners like United’s – and Liverpool’s – came to believe that the opinions of those who fill their stadiums and bank accounts do not matter.

“The message of Old Trafford is that the people do have a voice. Football would be foolish to ignore it.”

Henry labelled it “a day in the shaping” since John W. Henry helped lead plans for Project Big Picture:

“This was a day in the shaping since October 11 last year, when Project Big Picture, a power grab driven by the Glazers and Liverpool’s equally money-conscious John W Henry, confirmed the greed of many of the elite.”

And for the Liverpool Echo, Paul Gorst painted the protest as a warning to FSG for their part in a “grand heist” of football:

“This is what happens when you plan a grand heist of a game that so many love.

“Broadly, the point of the protest was valid.

“One that Liverpool supporters themselves would surely have agreed with as they tuned into their televisions on Sunday afternoon.

“Fenway Sports Group will have been watching on from the other side of the Atlantic with a little unease, too.”