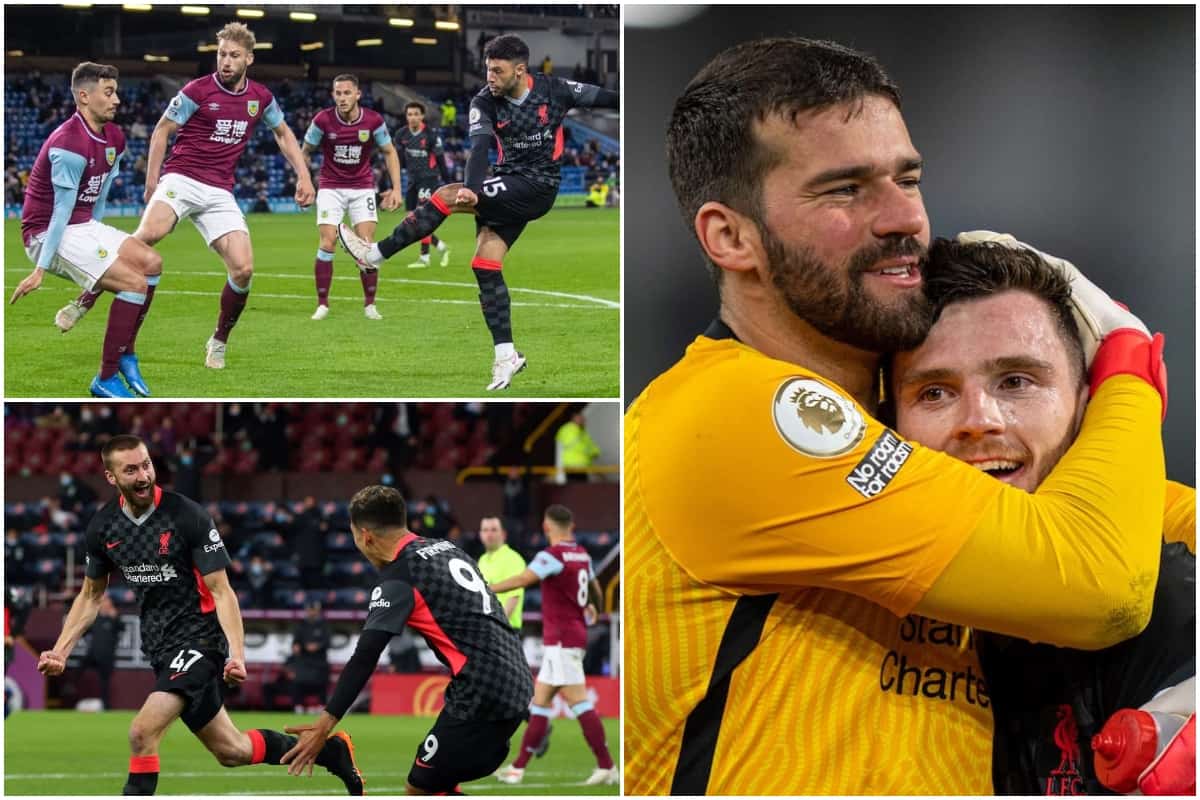 Jurgen Klopp‘s side picked up a massive 3-0 victory away to the Clarets on Wednesday night, dominating for large chunks of proceedings.

Liverpool’s lead was doubled thanks to a superb Nat Phillips‘ header before Alex Oxlade-Chamberlain enhanced the Reds’ goal difference late on.

Here, This Is Anfield’s Henry Jackson (@HenryJackson87) is joined by Dan Clubbe (@dan_clubbe) and Red (@TaintlessRed) to discuss a pleasing win and a huge match at home to Crystal Palace on Sunday. 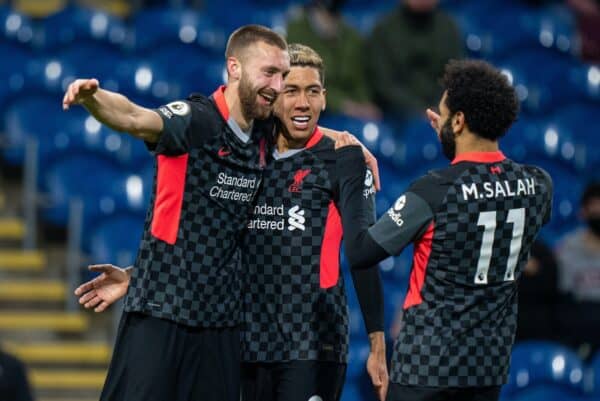 DAN: The result! Although it was far from a vintage Liverpool display, it was one with character in difficult circumstances.

On an individual level, Phillips was outstanding in what was perhaps a fixture tailor-made for him.

A true battler whose defensive awareness kept us in a comfortable position when things were getting extra nervy – we could wheel him out for Burnley away every season and watch him get Man of the Match.

And it would be remiss not to mention Rhys Williams in a similar breath.

Albeit not as commanding a performance, for an even younger lad to put in a shift against a physical side like that and help keep a clean sheet – brilliant.

Firmino’s goal was as close to 2019/20 Liverpool I’ve seen for a while and I have to mention Oxlade-Chamberlain’s strike too. Superb finish. Finally, Thiago – what a footballer.

RED: The result was by far what mattered the most. A must-win game, and as Klopp put it, a semi-final.

So to win 3-0 against a Burnley side buoyed by the return of their fans was brilliant.

Liverpool created a lot more chances than we usually do vs. Burnley – perhaps the home side’s desire to please their crowd and pressure removed from being safe from relegation meant they were a little more open than normal. 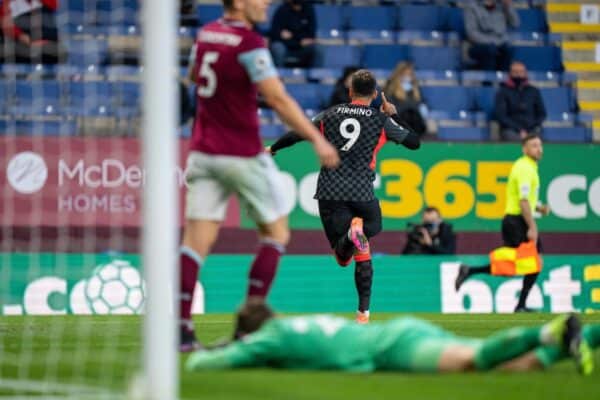 As Dan touched upon, Thiago was exceptional throughout. He provided composure, quality and direction to the whole team which was especially needed in the first half, when a lot of players were misplacing passes and not quite matching Burnley’s intensity.

The Spaniard has been one of our most important players during this unbeaten run that has miraculously got us into the top-four positions with a game to go.

Alisson was again good making a lot more punches than usual and quick to get off his line to close attackers. The Brazilian has had another good season in very difficult personal circumstances – some high-profile mistakes earlier in the season have perhaps unfairly tarnished his numerous good performances.

Rhys Williams and Philips deserve credit for winning a lot of headers – there were a lot of crosses to deal with!

Both do still have issues with movement and pace along the ground, but having actual centre-backs at centre-back has clearly helped the team and made the midfield stronger.

HENRY: First of all, getting the win was massive!

It wasn’t always easy – did you really have to try so hard in a nothing game for you, Burnley? – but once again Liverpool dug deep and were deserving winners.

Thiago was the definite standout for me, he was unreal. His ability to dictate a game, play outrageous passes and also work incredibly hard makes him a world-class player. Wait until next season!

Phillips was also colossal in the second half, winning everything in the air, and as Red alluded to, I didn’t think Alisson put a foot wrong.

On another positive note, wasn’t it lovely watching Liverpool in front of fans? Even if it wasn’t our own supporters, it was still like watching a different sport! 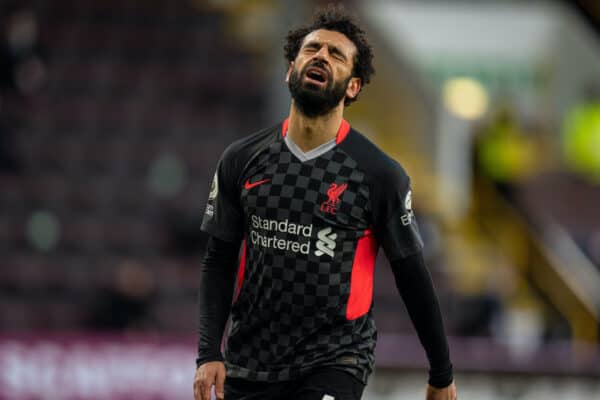 DAN: There were very few negatives on a night where the result superseded anything else that mattered.

At the risk of sounding like a broken record, wastefulness took over prior to the opening goal and when we were 2-0 up.

We literally couldn’t hit the target for 40 minutes when their debutant goalkeeper was clearly below par.

Although it was an improved all-round performance from Sadio Mane, the issue remains in front of goal, having somehow missed the target from two yards out.

RED: Continuing on from Dan, the common theme this season has been our wayward finishing and it was no exception here.

With a goalkeeper making his debut, watching our players constantly blast over or wide was especially frustrating.

When we finally hit the target, Firmino hit the ball straight at the ‘keeper, but he spilled it into the goal – showcasing the value of at least making him do some work.

Firmino was one of our better players second half, but prior to the confidence-boosting goal, he wasn’t having a good game.

Few players need a long break as much as Mane and I do hope some rest in the summer for both him and Firmino will re-energise them for the new season. Unlike some, I have not written either off, but I do worry. 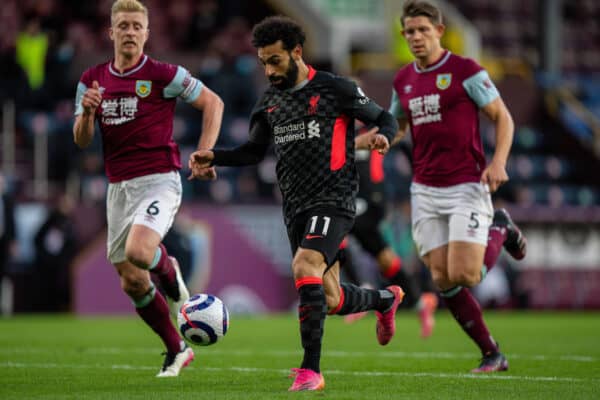 Gini Wijnaldum is another whose form this season has been mixed and I know he’s had a lot of criticism recently, sometimes fairly sometimes not.

I’m not going to overly criticise any players after we’ve won 3-0 away from home. The team did really well.

HENRY: It wasn’t a night to be critical, but the finishing in the opening 40 minutes was the biggest negative, with five genuinely excellent chances missed.

Even Firmino’s goal was a pretty average finish like Red says, but at least it was on target!

That is something that has to improve drastically next season if Liverpool are to be right in the title mix again.

I thought Fabinho was really sluggish, as was the case against West Brom, too – then again, we keep winning with him in midfield so he must be doing something right.

And if I’m being ultra-picky, Mohamed Salah making a mess of that counter-attack in the dying seconds was irritating – shades of Ousmane Dembele away to Barcelona when they were 3-0 up!

And plans for Sunday… 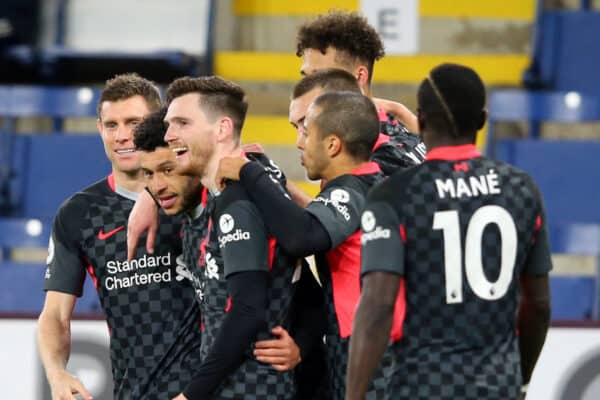 DAN: I’ll be watching at home for what I hope is the last time for a long time.

My newly-found rituals have altered (for the worse) from parking in the Derry Social Club and walking down early to sitting in the right place on the couch.

I’ve said all week if we overcome Burnley I’ll be confident and back us to get over the line at Anfield with fans in situ – that hasn’t waned.

Although the script is written for Roy Hodgson to return and give us one final dark day as a parting gift, at home with everything on the line I believe we will get the job done.

If you’d have explained this season to me back in August and said we will still finish top four – I’d have been delighted.

RED: The sports world turns to the Premier League on the final day of the season.

It’s always an exciting day, but with relegation and the title already decided, it’s the European places that have the most narratives. 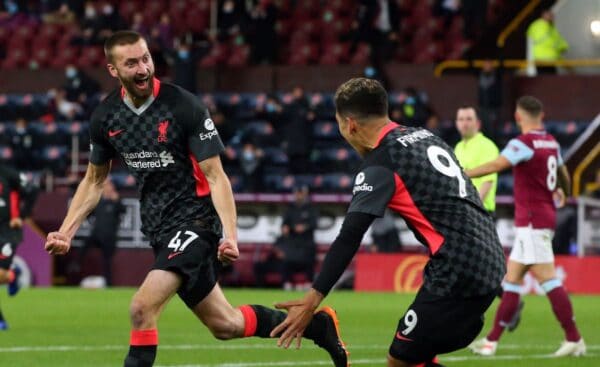 I’m rather nervous about the game but having the fans cheering the players on will be a big boost to the boys and hopefully get us over the line.

There may well be more twists to come – Crystal Palace will want to give Hodgson a good farewell, Leicester have a difficult game against an unpredictable Spurs and Chelsea have to visit Villa Park with their fans back and Grealish in the team.

Whatever is in store, excitement beckons.

HENRY: I will be in charge of TIA’s live blog on Sunday, nervously tapping away at my laptop and desperately trying to keep my composure!

All I ask for is a nice comfortable, drama-free win, allowing me to coast through proceedings and enjoy a nice beer afterwards.

Then again, do Liverpool ever do things the easy way?

The thought of Hodgson denying us on the final day is a sickening one – Palace have been a thorn in our side before – but I am backing the Reds to get the job done.