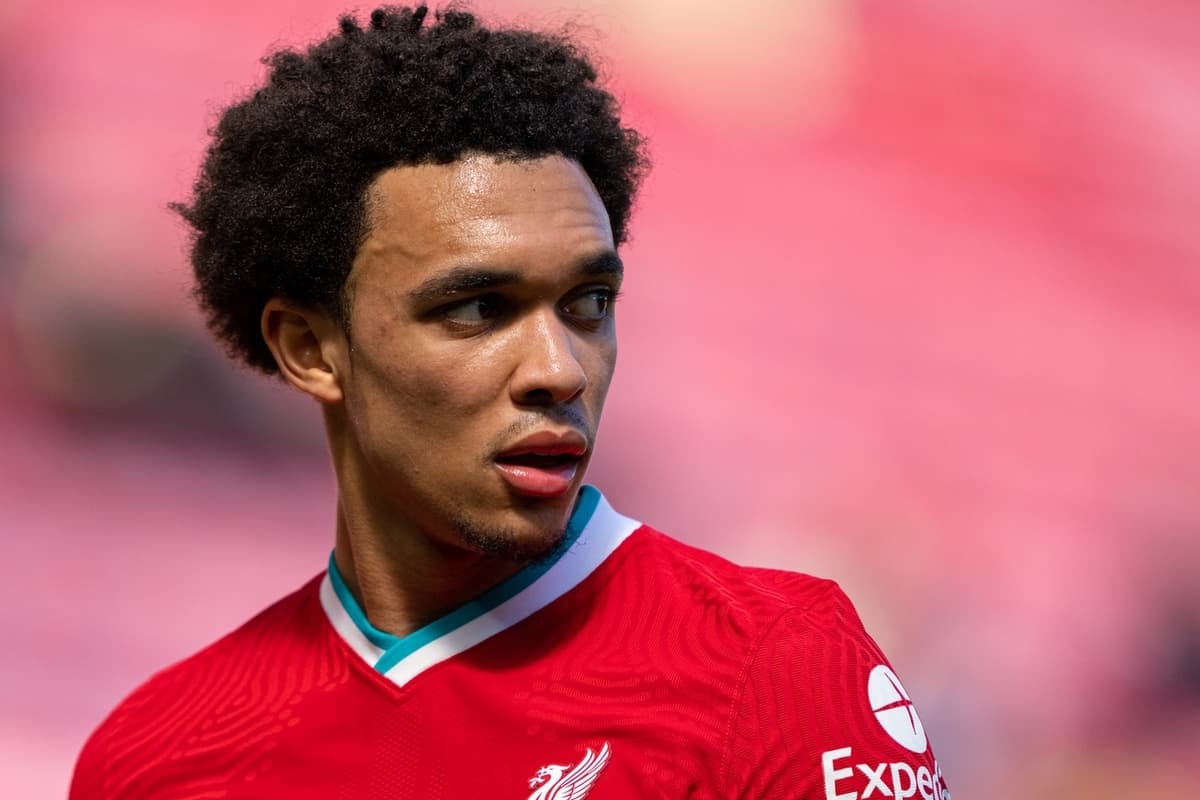 Trent Alexander-Arnold is still expected to miss out on the England squad for the Euros, despite hitting world-class form and the squad limit being increased to 26.

Gareth Southgate has the opportunity to select 26 players for this summer’s European Championship, rather than the usual 23, but it is “improbable” Alexander-Arnold will be one of them.

That is according to The Athletic‘s David Ornstein, who reports that “there is no indication that he has leapfrogged his rivals in the manager’s mind.”

Those rivals are Kyle Walker, Kieran Trippier and Reece James, who are expected to be preferred due to Southgate’s belief they “show strong defensive qualities alongside their attacking instincts.”

Alexander-Arnold, it is suggested, may not “strike that balance as well as [Southgate] believes the other candidates for the position are able to.”

As Liverpool sit top of the Premier League‘s form table in their late bid for a top-four finish, their No. 66 has been one of the best players in England in recent months.

It would be a travesty if he misses out on a major international tournament, though from a Liverpool perspective, a break could be seen as essential this summer.

Many supporters have taken to Twitter following this latest update, with Southgate coming in for criticism:

If Trent isn’t in England’s 26 man squad for the Euros Southgate has lost the plot.

According to The Athletic, Trent Alexander-Arnold is likely to miss the Euros for England.

Gareth Southgate has zero football knowledge and I hope he massively regrets it.

Trent is England’s best right back and it’s not even a debate.

You must be unwell to think differently.

Remember Roy Hodgson telling Roberto Carlos that he wasn't a full back – to which Carlos replied he didn't understand football.

Trent is Southgate's Roberto Carlos moment. Someone who stands out amongst his peers and yet he has no idea how to make use of him because he breaks

whatever archaic mold Southgate has in his mind for a full back.

If Southgate takes Trent, England are still going to crash out because he’s a magnificently inept manager.

For Trent Alexander-Arnold to be left out of a 23 man England #Euro2020 squad it would be utterly stupid… but to be left out of an larger 26 man squad is inconceivable – Southgate (despite circulating reports) surely isn’t that daft.

I'd rather Southgate didn't misuse Trent, so if the plan isn't to play to his strengths then fair enough leaving him out of the squad. But he's a match-winner who can singlehandedly change a game. You need those players in knockout football. Odd not to build around him.

However, the bright side is that Alexander-Arnold will be rested ahead of the new campaign, which could be vital after a draining two seasons in which he has suffered with injury and illness.

Trent gets a full pre-season to rest while England get embarrassed and Southgate finishes the summer jobless? pic.twitter.com/76GdRHLPQA

But it seems baffling that Southgate would even consider leaving one of the best right-backs in world football out of his squad, particularly when his other options are hardly pulling up trees.

It could come back to bite the England manager, who should be getting the best out of another top-class generation of young talent – of which Alexander-Arnold is front and centre.