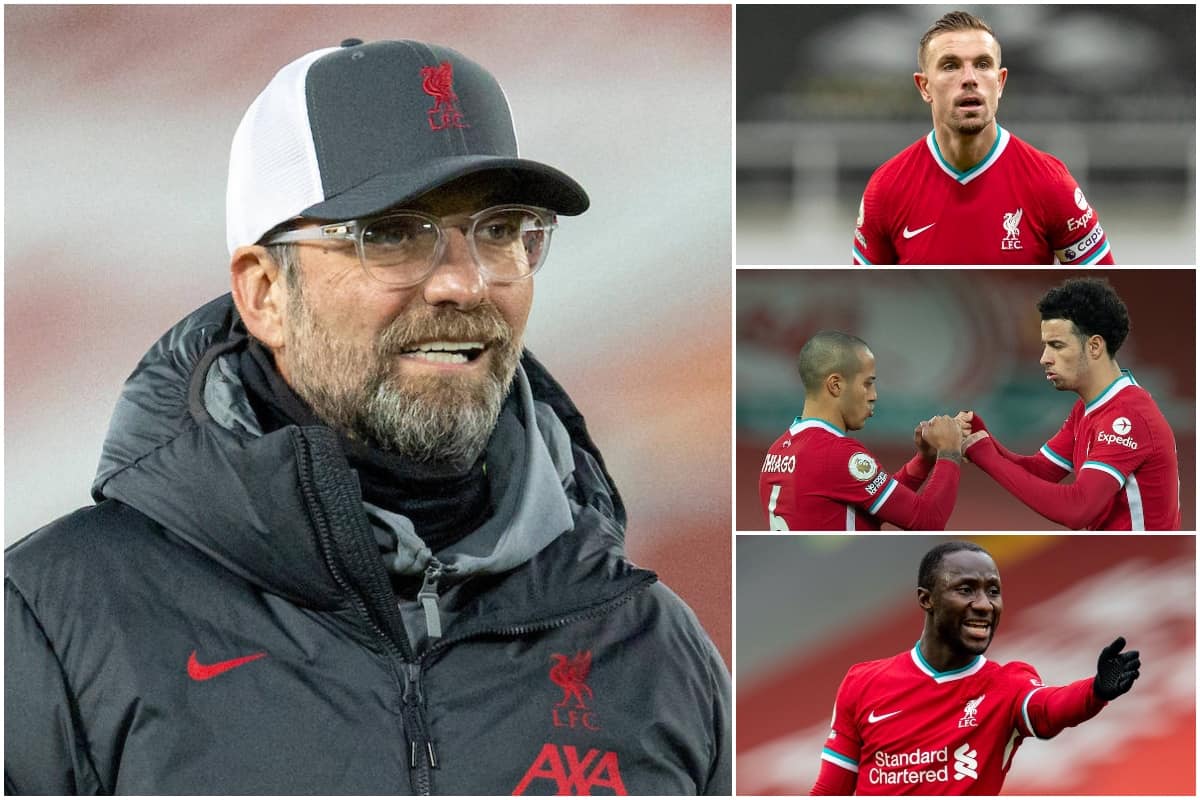 With Liverpool needing to improve on the season just gone, they’ll have an obvious place to start with the contributions from those in midfield having significantly dropped off.

The reigning champions found it tough going in 2020/21, with the perfect storm hitting Anfield to place enormous pressure on those left standing.

The forwards were largely in the spotlight as scrutiny came their way as goals dried up and opportunities were spurned, with 10 games throughout ending without a Liverpool score.

It was as much a collective issue than one just isolated to the attacking contingent, as the wastefulness looked bound to unravel Liverpool’s season further.

The altered goal of securing Champions League football would be achieved but it came primarily from the up-turn in form of the front four and unexpected faces in defence.

The goal threat from the middle of the park was largely inexistent, from day one to day 253 – creating a ripple effect that loaded the pressure on the shoulders of others.

It, of course, has to be said that the system Jurgen Klopp deploys is not one that asks for big numbers from his midfield department on the scoreboard.

They are instead tasked with progressing the ball up the field, using their industry to keep and win back the ball in addition to serving it up to the full-backs, the creative hub of the team.

The demand, therefore, for goals and assists isn’t too great as the onus is elsewhere. The drop in 2020/21, however, was too much to make up in attack. 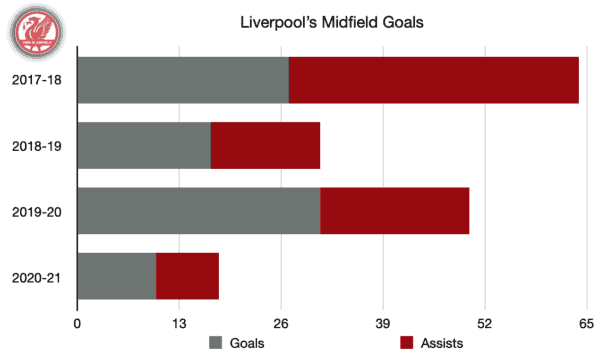 That accounts for a total drop of 32 in goal scoring contributions from one season to the next – the lowest return in the last four seasons.

You can, of course, point to a number of mitigating factors in regards to injury, positional changes and Klopp’s carefully managed rotation policy.

The fact still remains, however, that the lack of influence from midfield made sure that the Reds were one-dimensional at best, all the while adding pressure to a misfiring forward line already under the microscope.

Not only does it make Liverpool predictable, but it eliminates a much-needed threat if one is to consistently challenge for top honours, and a more even spread is required once more.

Time for an evolution?

While the above-mentioned in-house issues made for a particularly troublesome time for the midfielders, so too did how the opposition presented itself.

It’s best described as parking the bus. Teams were prepared to drop deeper against Liverpool and were then primed for a counter-attack or set-piece to hit where it hurts.

One need only look at the draw against West Brom and the defeats to Burnley, Southampton, Brighton and Fulham as examples.

The Reds averaged 62 percent possession in the Premier League in 2020/21, providing ample time to probe the opposition – but space just wasn’t there.

Roberto Firmino was wisely nullified by the opposition as the space he so brilliantly occupies and then opens up for others was reduced, while late midfield runners were virtually non-existent.

The way Klopp sets up his side makes it so, but the capabilities are there for Liverpool to hit the scoreboard from the midfield as seen in the seasons preceding 2020/21.

An upturn in form and the return of key players will go some way in seeing the Reds return to their previous levels, but that isn’t to say tweaks aren’t needed both tactically and with new arrivals.

The departure of Gini Wijnaldum opens up a midfield vacancy, one that Borussia Monchengladbach’s Florian Neuhaus has been linked with – where his arrival would act as part of an evolution of Klopp’s side.

Press-resistant and progressive with the ball thanks to an excellent passing range, Neuhaus scored eight and assisted eight for the German side in 2020/21 and his arrival, or a player in a similar mould, would open the door to change and reduce the over-reliance on the full-backs to create.

The midfield warning light came on in 2020/21 and it must be correctly serviced over the summer to ensure Liverpool establish a sustainable goal threat across all departments.