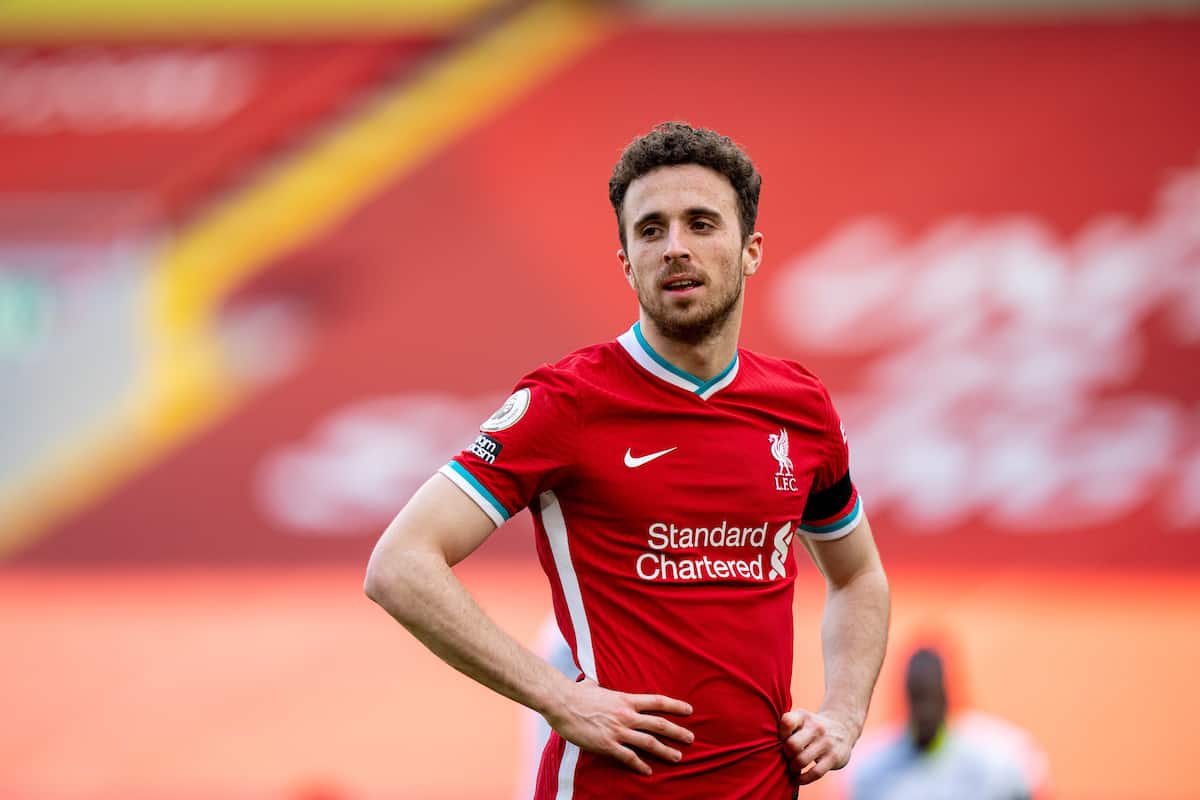 Diogo Jota arrived at Liverpool to offer competition for a heavily relied upon and fearsome front three, and he more than proved his credentials for the task.

Come on, let’s have a show of hands. How many people were initially unconvinced?

The signing of Jota was a funny one. Classic Liverpool of new, in many ways, given it just came out of nowhere.

Linked one day, in talks the next, pulling on the red shirt by the weekend.

It was a lovely, clinical arrangement but did pose a lot of questions. Was this just part of Liverpool seeing how far they could push their luck when sending Ki-Jana Hoever the other way?

Or, most pressing, the topic of how exactly Jota would even leave his mark on a front three comprising Mo Salah, Roberto Firmino and Sadio Mane.

Was it just an attacker available on the market and the Liverpool recruitment team wanted to get that box ticked? Naturally, this would not prove to be the case.

Hint at something special

Hindsight is a wonderful thing, yet a year ago Liverpool were still riding the euphoric high of a title triumph with all three points of Jurgen Klopp’s attacking trident still razor-sharp.

It seemed unthinkable that one could make way in any form other than a late substitution in a match that was already beyond doubt.

Yet Jota had other ideas, and it’s fair to say his debut season on Merseyside has been a resounding success.

Injuries, of course, have bitten hard. It’s been the story of Liverpool’s season all over, and Jota himself was unable to avoid the trap of inevitably that was befalling each of the big names.

A low point of the campaign undoubtedly comes in the form of his momentum-crushing blow in the Champions League dead rubber against Midtjylland.

We’ll never know what was truly going through the mind of Klopp when he dished out a whole host of stars against the Danish minnows, but the time for crying over spilt milk on that front is long gone.

It was, of course, in European football’s elite competition that Jota truly looked like a Liverpool player. His sublime hat-trick against feisty Italian outfit Atalanta signalled the start of something special.

For the large part, what was the most impressive thing about Jota was his timing and application to Liverpool life. Whereas other players have needed a bedding-in period or a slow transition to the technicalities and rigours of Klopp football, Jota simply just fit.

The Portuguese redefined the phrase ‘to hit the ground running’ and showed a brash fearlessness in the way he played his football.

If he arrived with the perception of an unpolished diamond, he certainly began to glisten straight away.

Liverpool players, staff and fans will always be thankful for this. It’s not overdramatic to say times certainly got tough in the midst of the forgettable 2020/21 campaign. Injuries, fatigue build-up, a lack of confidence and coherence.

The Reds needed a spark to bring games alive when big names began to struggle. Thankfully Jota was on board and more than willing to get his teeth stuck into the action.

So, what about those criticisms levelled at him from his time at Wolves – about not being effective enough, or consistent enough? They didn’t matter.

Jota was hell-bent on writing his own narrative and became the first player in Liverpool history to score in his first four top-flight home matches, after surpassing Luis Garcia’s record of three.

In his first 10 games, comprising only five starts and the rest five substitute appearances, Jota had amassed seven goals with an average of one strike after every 70 minutes of football played.

It’s all the hallmarks of a player in exactly the right moment of his career to step into the big time.

Many strikers would have baulked at the responsibility placed on their shoulders. Even many rival fans would have concluded that Liverpool had the most exciting and talented forward line in European football from the 2018 season onwards, and to arrive with the intention of shaking that up certainly commands respect.

Jota need only have looked across at Divock Origi in the Anfield dressing room to size up the task at hand.

The talented Belgian has had flashes of greatness in a red shirt and will always hold iconic status for his European heroics, but ultimately his number has been up for some time. Origi has made peace with the fact that he is never set to be a bona fide Liverpool striker, and perhaps Jota could have considered the same fate.

The introverted youngster, however, was beyond driven. Spending his down-time from football playing online games and enjoying moments with his young family, Jota has come across as a wise head on youthful shoulders.

To assume it helped the settling in process is perhaps not too far wide of the mark. With his mind focused, his form soared for both Liverpool and the Portugal national team – for which he is set to be a leading light at Euro 2020.

Klopp’s men undoubtedly benefitted from Jota’s return for the crunch run-in of the campaign. Though the goals did not immediately return with his presence, the desire and tenacity sure did.

What to expect next

His debut season with the Reds tallies in at 30 appearances in all competitions, with 13 goals and one assist. A very respectable return given his time spent on the treatment table, though Jota himself will expect better.

So too will Liverpool fans, despite being more than happy with his maiden offerings. This is what makes the 24-year-old so exciting, he never looks like he’s reached a peak level of performance.

A little like that one kid at school who was always ridiculously good at football and could pull out a blinder of a shift regardless of where the match was being played; on the pitch, concrete yard, the corridors, etcetera.

Jota is a born winner and that’s just what Liverpool need. There is a perch to climb back onto next season and expect the Reds’ No. 20 to play a starring role.

Worst moment: Limping off against Midtjylland