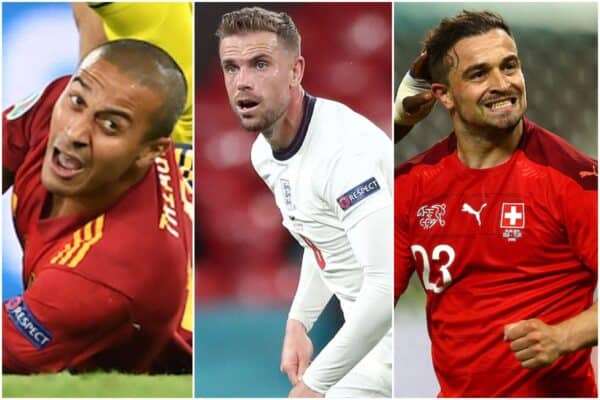 With England ridding themselves of their German ghosts, Jordan Henderson is the final Liverpool player to secure quarter-final action with their country this summer.

The Liverpool skipper saw himself named on the bench for the sixth England game in succession on Tuesday evening as Wembley played host and Germany were the visitors.

While naming a questionable lineup, Gareth Southgate’s men asked most of the questions after settling into the game following a nervy start.

Ex-Red Raheem Sterling would open the scoring in the 75th minute with Harry Kane following in the 86th, at which time Henderson entered the fray to see out the final stages.

There would be just seven minutes to play for Henderson after replacing Declan Rice, taking his summer tally to just 97 following his recovery from a groin injury.

And while Jurgen Klopp would have been disheartened to see his native Germany bow out, England’s win now means he has six players featuring in a quarter-final this summer.

At the Euros, Liverpool are to be represented by Henderson, Thiago and Xherdan Shaqiri – the latter of whom booked his place after Switzerland completed an unexpected upset having knocked favourites France out via a penalty shootout.

It came following a mesmerising 3-3 draw, a game that had followed another goal-fest which saw Spain emerge as 5-3 victors over Croatia.

Thiago played no part, but his team now progress and they will meet Shaqiri’s Switzerland on Friday evening – meaning at least one Red is guaranteed semi-final action.

For Henderson, it’s a trip to Rome with England to meet Ukraine for a place in the last four for only the third time in their history.

As for the other three Reds in quarter-final action, you’ll need to look further south and to Copa America where Alisson, Fabinho and Roberto Firmino have booked their place with Brazil.

The trio have each amassed over 125 minutes to date with manager Tite having rotated his squad throughout the group stage, where the Selecao comfortably finished atop of their group.

It sets up a tie with Chile on Saturday, where Brazil will be asked another question of their credentials in defending their Copa America title.

It sets up an important few days for Liverpool’s quarter-final contingent and guarantees a late return to pre-season action, which starts on July 12, with each to be handed at least three weeks holiday.