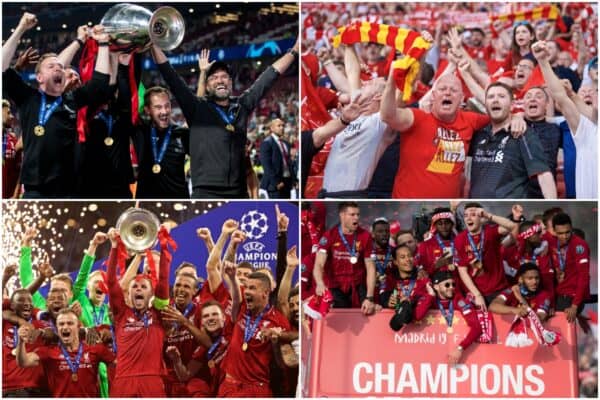 Liverpool fans savour Madrid memories 2 years after No. 6 – “Time of our lives”

Liverpool won their sixth European Cup two years ago on Tuesday, with supporters who travelled to Madrid or watched on from elsewhere marking the anniversary.

In Madrid, we won it six times.

Let’s talk about six, baby. June 1, 2019 was the night that saw Liverpool clinch their second Champions League and, overall, their sixth European Cup.

It wasn’t a classic of the genre, with Mohamed Salah‘s early strike and Divock Origi‘s result-clincher bookending a tired clash played out in the summer heat, but it was an occasion to savour for the Reds.

Still the last Champions League final to be contested in front of a full house, Liverpool vs. Tottenham – played out to 63,272 fans, the majority of which seemed to be Reds – was one of the biggest nights in the club’s history.

Jurgen Klopp‘s side are yet to follow it up with another European Cup, but the Premier League, Club World Cup and UEFA Super Cup have all been lifted since then.

It is arguably Madrid that holds the fondest memories, as those taking to social media on the anniversary would attest:

… the morning after the night before at Puerta de Atocha was some scene: pic.twitter.com/yWVo3Yww6f

The two-year anniversary was also an opportunity to reflect for some of those involved at the time, including Alberto Moreno, who has since won the Europa League with Villarreal.

Moreno was an unused substitute on the night, but was a focal part of the celebrations as he honoured the late Jose Antonio Reyes:

On this day @LFC we had this amazing feeling and win @ChampionsLeague ! We all want to do it again! ?#lfc #reds #YNWA pic.twitter.com/YUGTlTtrMI

A lot has changed for Liverpool since then, with seven of the matchday squad from the Wanda Metropolitano having left the club along with a number of Klopp’s backroom staff.

But the fans have, of course, remained, and the memories shared of Madrid and No. 6 are proof of how significant a night it was for the Reds.