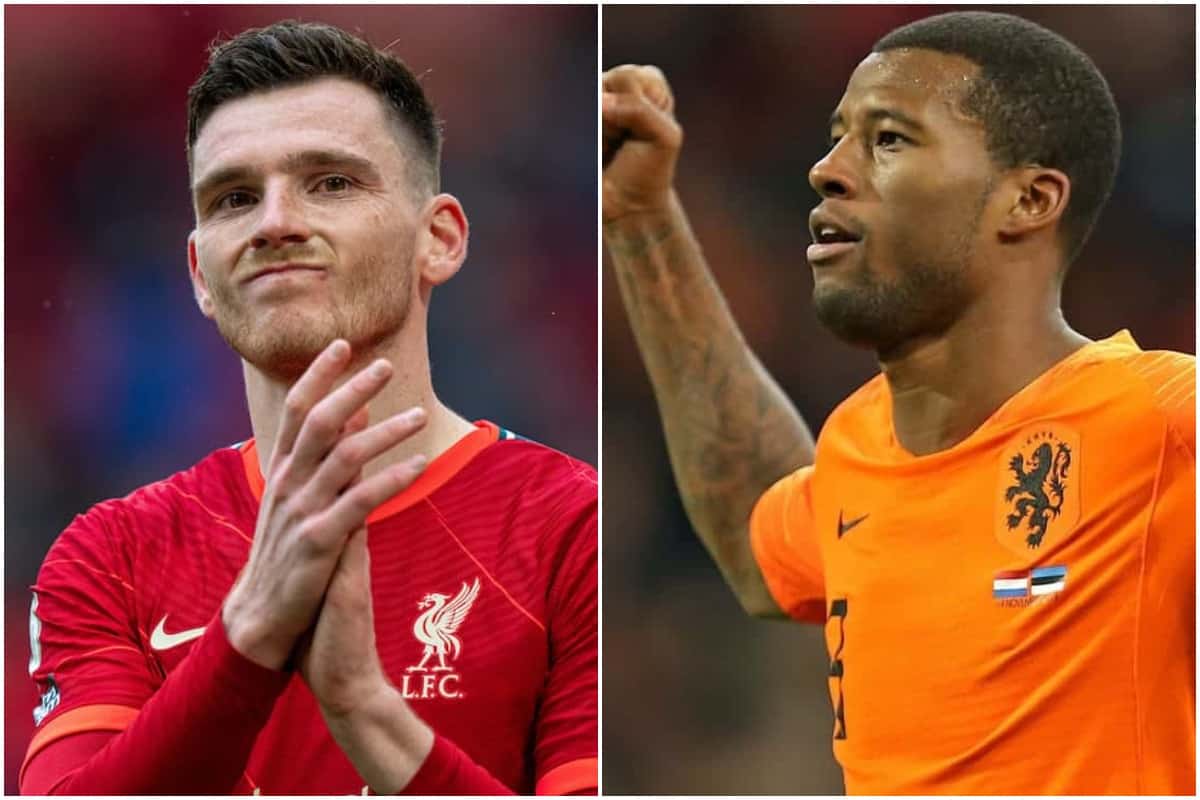 Day three at Euro 2020 served Liverpool fans a reminder of what they’ll be missing next year; day four brings a massively proud occasion for one of our own.

England are off and running after former Red Raheem Sterling saw off Croatia, leaving Scotland as the final home nations side hoping to make it three from three who avoid defeat in the opening round of games.

Group C also got underway and immediately staked its own claim for the craziest, most entertaining and potentially most open group, giving fans a welcome couple of high-scoring games on Sunday evening.

Into a new week we go, with all eyes on former world and European champions Spain and how their new-look squad copes, on and off the pitch.

Andy Robertson. It will be one of the biggest days of his career when the Liverpool left-back, the Scotland captain, leads out the nation for their first major tournament fixture in a generation – 23 years, all told. It’s 25 years since the Tartan Army were able to celebrate a victory at a finals.

If he can inspire his squad to beat Czech Republic, iconic status in his home country is effectively assured.

There have been several big stories already written at Euro 2020 in terms of firsts or firsts in decades; now it’s the turn of Steve Clarke and Co to get their own campaign up and running in style…or at least in substance.

A few weeks ago, Aymeric Laporte was still uncapped at international level as the season ended at age 26. Fast forward a few days, he had both his 27th birthday and a quick switch of nationality, from France to Spain – boom, instant first choice.

The one-cap centre-back will get his first real taste of what football at this level is all about: the expectation, the atmosphere, the excitement, the fact you can slip up once and still make it through and win the whole thing. He probably won’t want to do the last one exactly like that, though.

Ironically, he’s going to make his competitive Spain debut up against someone who actually plays in Spain and in the same Basque region Laporte was when he didn’t want to be a Spanish international: Sweden striker Alexander Isak, Real Sociedad forward and livewire goal-getter.

Playing again in a more advanced role, he was hugely involved and very effective as he captained Netherlands to a thrilling 3-2 win over Ukraine, netting the opener himself with a typical (in orange, not Red) burst into the box and cool finish.

He’s going to score loads for PSG, isn’t he?

What an eventful first game. A lot of good moments, also a short period of weakness but in the end brought in the win. ?? What a relief and great to see so many cheering fans in the stadium, even our King and Queen ??? #NEDUKR pic.twitter.com/V4plRozWYl

The fact that Liverpool let Gini Wijnaldum go is going to haunt me for the foreseeable future.

Watch Gini Wijnaldum in this game in a more attack-minded position and then appreciate how superb he was in a disciplined role for Liverpool.

He was simply doing exactly what Klopp asked of him, to perfection many times.

Such a talented player when he's let off the leash.

I reckon I’m sadder about Wijnaldum going than I was with coutinho, sterling, Suarez etc which sounds mad i know

Scotland to get a positive result – they’ll need to be perfect for a win, but can at least match the Czechs. Poland to beat Slovakia and Spain to edge out Sweden after wasting a load of chances.