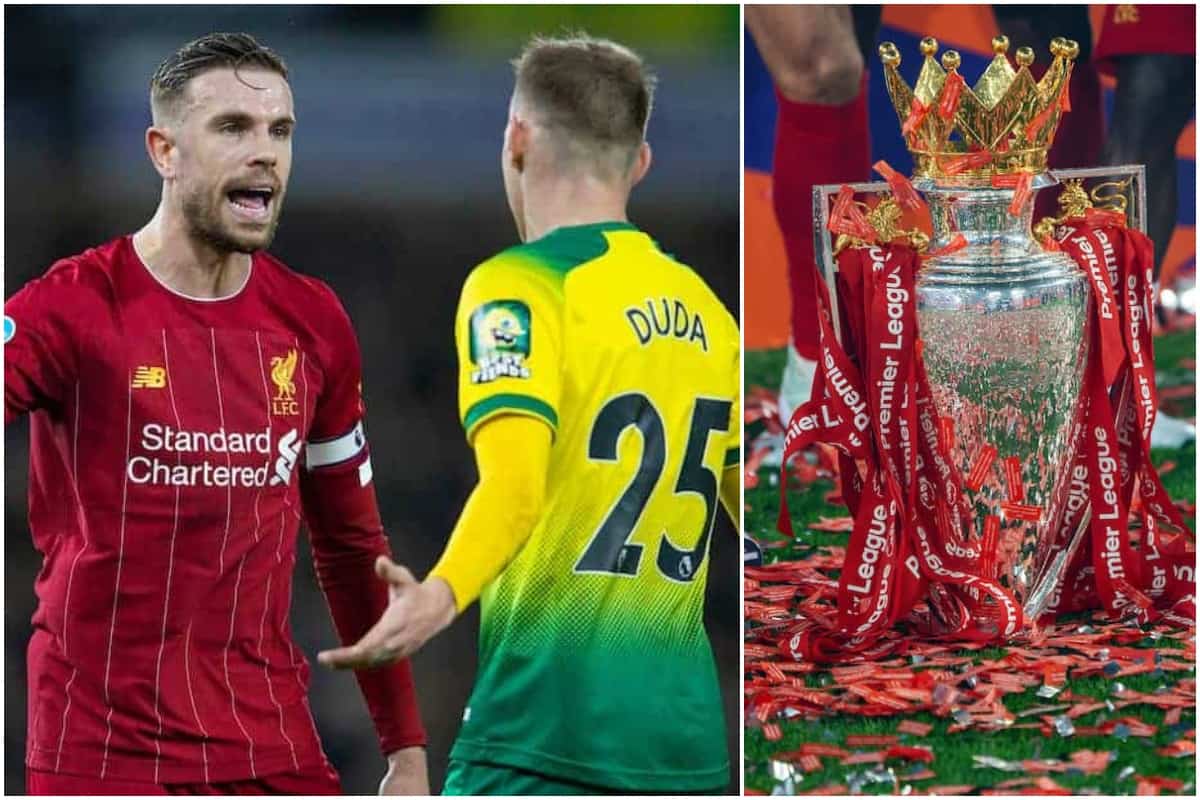 Liverpool will see their 2021/22 season start on the road and end at Anfield, and fans were abuzz with the stars aligning once more with the campaign to kick off at Norwich.

The outline for the new campaign is now upon us, it’s just up to Liverpool as to how it will all unfold and the beauty of fixture release day is that anything is possible.

It’s a clean slate after a turbulent year for Jurgen Klopp‘s men, where they had to dig deep to ensure Champions League football could return for the fifth consecutive campaign.

Norwich presents the first hurdle to overcome before Anfield gets its first taste of action against Burnley and then Chelsea, whereas the festive period is to prove a tough one.

And it left plenty for fans to contemplate, especially considering the return of supporters.

Starting against Norwich was a good omen in 2019/20, so why not this time around too?

Liverpool played Norwich in the first match of the 2019-20 Premier League season and won the league, again we are playing our first match against Norwich, this means we are winning the league

Last time we started a season against Norwich….. pic.twitter.com/CeWNIV9DGs

We always seem to play the Championship Winners on the first day, so yeah, lock it in

I was at Anfield the last time Liverpool played Norwich City in their season opener. They went on to win the league that season. Grant Hanley’s own goal opened the scoring as Liverpool won 4-1. pic.twitter.com/4j17OoRFGS

3 – For a third consecutive season, Liverpool will face newly promoted opposition in their opening Premier League match of the season – they've scored exactly four goals in each of the previous two (4-1 vs Norwich in 2019-20, 4-3 vs Leeds in 2020-21). Confident.

Last time Liverpool started a Premier League season against Norwich, or ended one against Wolves, worked out pretty well. pic.twitter.com/qXD8oyWegh

The festive period was met with mixed reactions, with some tough away trips…

Heavy that Festive period for #LFC

“Superb boxing day game. Chelsea NY’s a pain but at least it’s a normal train service. Good run in to #20!”

– KloppiteE on This Is Anfield

“That 2 week period of Tottenham, Leicester, Leeds, Chelsea around Christmas is horrible. 3 away games in that time run as well.”

– Macca17 on This Is Anfield

Fixture list looks good. Very evenly distributed. For December I think all are guaranteed wins if liverpool are in form.

Home games against Villa, Newcastle and Leeds then away games against Spurs, Leicester and Chelsea don't make for the easiest Christmas fixtures. But sure we wouldn't have it any other way makes for the best time #LFC

That looks one of the better fixture lists Liverpool have had in recent years.

Also, this fella is back for them #LFC pic.twitter.com/T7NK1K2uL0

Fixtures are okay all round. Start, middle and run-in

– Akshay on This Is Anfield

The tough fixtures are spread out pretty well imo. #FixtureReleaseDay

#Liverpool have a fairly spread out fixture for next season tbh. Norwich away 1st game. Face Chelsea, Leeds, city and United in the first 10 games. December looks stacked and tricky as always, ending the season at home to wolves. Bring a couple of players in and we should be good

With just 59 days until the next season gets underway, there’s plenty to be optimistic about for what could soon be around the corner!