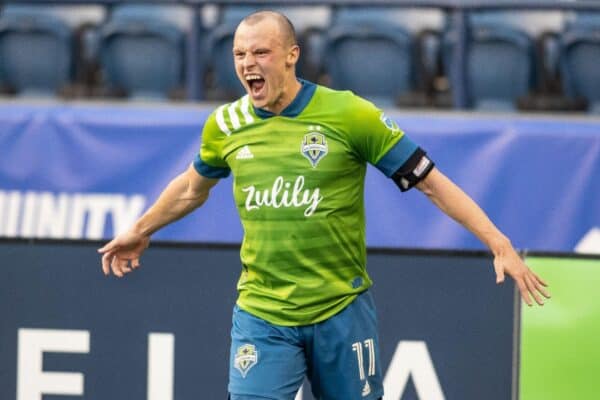 Liverpool, the city and the football club, has had numerous links to North America over the years, from trade and business to sport, music and culture.

Liverpool FC’s most obvious current links to the other side of the Atlantic are the large number of fans and LFC supporters groups based on the continent, and the current owners, Fenway Sports Group, who are based in Boston.

There are also American influences in the way Liverpool go about their business, most famously their attempts to adapt Moneyball methods of scouting and player analysis from baseball to football.

On the pitch, Steven Gerrard’s move to Major League Soccer side LA Galaxy was one of the more high-profile transfers made by North America’s designated first division, but below the surface there are many more MLS players over the years for whom Liverpool has played a part in their careers.

Here’s a look at some of those less familiar former LFC names currently plying their trade in the USA and Canada.

After a couple of years in Liverpool’s youth and reserve sides, Mavinga returned to his homeland with Rennes before moving to Rubin Kazan and spending a few seasons out on loan back in France.

Following this unsettled start to his career, the Frenchman eventually found a home in Canada with Toronto FC, for whom he has now played over 100 games.

In his first season at Toronto, Mavinga played a big part in the club’s treble win as they collected the Supporter’s Shield (league title) MLS Cup (playoffs) and the Canadian Championship.

In the subsequent season, he was part of a memorable Concacaf Champions League quarter-final victory against Tigres before missing large parts of the rest of the campaign through injury.

The club finished runners up in the MLS Cup in 2019 and though they finished second in the league last year, were knocked out in the first round of the playoffs by new-boys Nashville.

The 30-year-old has been a regular in the Toronto lineup so far this season, but they currently sit bottom in the overall standings.

Big things were predicted for the left-footed centre-back on his arrival at Liverpool in 2010.

The Scotsman joined from Rangers for a fee of £2 million and there were tentative, hopeful comparisons to Alan Hansen.

Wilson failed to make the grade at Liverpool, though, and was soon looking to continue his career elsewhere.

Obligatory loan moves followed but he eventually moved back to Scotland on a permanent basis with Hearts and then Rangers, before moving to the United States with Colorado Rapids in 2018.

The Rapids are one of the lower profile MLS clubs but have had a reasonably good start to the 2021 season.

The 29-year-old Wilson now has over 60 appearances for the Denver-based side and has already scored one goal in their promising start this year.

Appropriately named for someone who has spent time in both Liverpool and the USA, Lennon is still only 23 but has already played for two MLS clubs since leaving LFC’s youth setup.

The American initially joined Real Salt Lake on loan in 2017 before making the deal permanent a year later.

The versatile young player has played in numerous positions, from his time at Liverpool as a forward to regular games at right-back in MLS.

He now plies his trade for one of the more high-profile and well-supported teams in MLS, Atlanta United.

From here he’ll be looking to raise his own profile to the point where he’s in consideration for the United States national team, and maybe even a move back to Europe.

He also has an Irish passport, which was used to facilitate his move to Liverpool, so maybe the Ireland national team will show an interest in him at some point.

The Australian wing-back who also represented England at youth level made a handful of appearances for Liverpool having risen through the youth ranks as a teenager.

He has 11 appearances for the club in total across games in the Premier League, FA Cup, League Cup, and the Europa League.

In search of more regular football, Smith moved to Bournemouth on a permanent deal after a short loan spell with Swindon Town, but he was unable to break into the starting XI.

His first spell with Seattle Sounders came on loan from Bournemouth in the 2018 and 2019 seasons. In the latter, he made 29 appearances as the West Coast club won the MLS Cup with Smith starting in the final against Toronto FC, which Seattle won 3-1.

The move was made permanent in 2020 and the 27-year-old has appeared regularly for the club in 2021 as they’ve risen to the top of the MLS standings in style, with Smith notching up three goals and two assists already.

MLS will no doubt be a future destination for other young players who are unable to achieve the difficult task of progressing from academy to first-team at one of Europe’s top clubs.

And given the rise of US players such as Sergino Dest at Barcelona, Weston McKennie at Juventus, Brenden Aaronson at Red Bull Salzburg, and Gio Reyna at Dortmund, it wouldn’t be a surprise if an American player donned Liverpool red at some point in the near future.