Sixteen months after his shock departure from Trabzonspor, Daniel Sturridge is still looking for a new club, and insists he feels “the best I have felt in 10 years.”

Sturridge joined Trabzonspor on the expiry of his contract with Liverpool in 2019, but an FA betting charge – which led to a four-month worldwide ban – prompted his departure after just six months.

Almost a year-and-a-half later, the striker is still weighing up his options when it comes to his next club, having relocated to Los Angeles.

His affinity for the United States has led to speculation over a switch to MLS, with Inter Miami and DC United both credited with an interest, but there will no doubt be offers from Europe, too.

There could even be clubs in the Premier League considering a deal for a player who is still only 31 and believes he is in the same shape he was in his 24-goal campaign with Liverpool in 2013/14.

“Moving forward for me now I am driven. I know I have it. I know I am me. I am so confident. It is hard to explain it. I just feel it and people will see it,” he told the High Performance Podcast.

“I am training so hard now my playing weight is back where it was eight years ago.

“I am obsessed by the fact that I know I want to be what I was before and better that. I will be better than that. I am wiser now. I am older now. 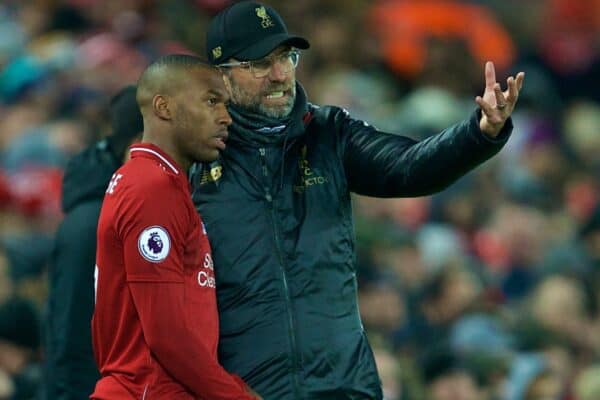 It is hard to fault Sturridge’s positivity, particularly given all that he has been through with injuries and his ban – which arose due to a member of his family betting on a move in 2018.

He added: “I honestly feel at this present moment the best I have felt in 10 years.

“It’s strange to say it but it’s a feeling. It’s an emotion and it’s a feeling, and physically it is showing too, so I feel amazing.”

The door is almost certainly closed for him at Anfield, with Jurgen Klopp having already bid farewell to a “modern-day Liverpool great” upon his release two years ago, but he could be a fine addition for a number of clubs.

On the subject of Klopp, Sturridge was full of praise for a manager who only handed him 40 starts over four seasons, describing their relationship in his final campaign with the club as “unbelievable.”

“I’ve got nothing but love and respect for him, not only for what he’s achieved at Liverpool but for the relationship we have today,” the Reds’ former No. 15 said.